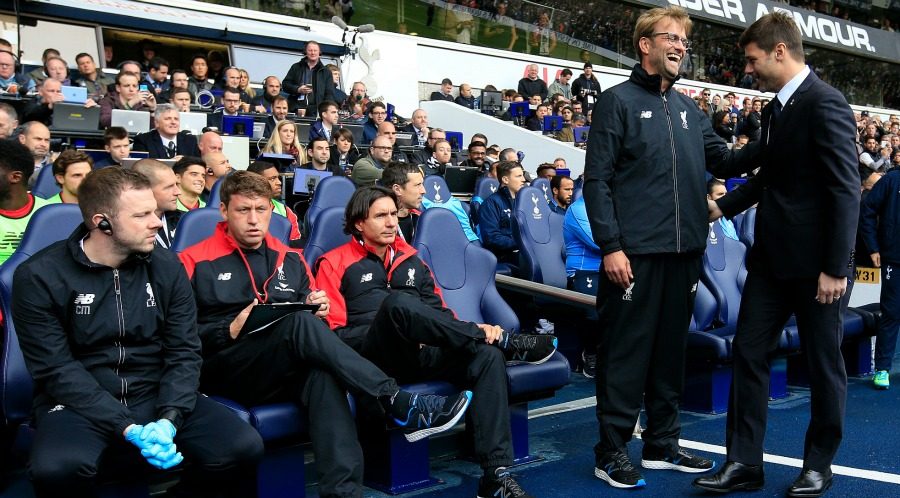 Kicking off the Premier League weekend is a tasty Argentine-German dish being served up just after noontime in North London. It's Tottenham and Liverp

Around the World With a Six Pack
The Best Liverpool – Chelsea Clashes of the New Millennium: Part 1
Premier League Weekend Wrap

Kicking off the Premier League weekend is a tasty Argentine-German dish being served up just after noontime in North London. It’s Tottenham and Liverpool. It’s two charismatic managers who often seem to give as much courteous thought to the neutral observer as fans of their own respective teams. This match will draw many people to White Hart Lane, meaning it will probably be difficult to find an available seat in the stadium, with two of the biggest teams in the league going head to head. However, you might be able to buy Hotspur tickets, have a look online to see if you can get your hands on some tickets for the Lane. This could turn out to be one hell of a matchup, which is why you might want to consider placing a bet on it. In order to get the best odds possible, you might want to make use of something like BookmakerAdvisor to compare a variety of different bookmakers.

Tottenham gaffer Mauricio Pochettino is in the third year of his reign at the club, last season guiding them back to an elite level. With Tottenham now fully aware of their Champions League slate (being drawn into Group E alongside CSKA Moscow, Monaco, and Bayer Leverkusen) and sitting in seventh place back in the Premier League with a draw and a win to their names, they are due to host an ever inconsistent opponent.

The Reds, led by their quirky German leader, have put forth two performances that left near opposite reactions from their supporters. Jurgen Klopp’s men started this season with a thrilling 4-3 win away to Arsenal, before falling 2-0 away to newly promoted Burnley the following weekend.

Liverpool have phenomenal numbers against Spurs in recent seasons. Tottenham are without a win in their last seven Premier League matches against Liverpool, losing five and drawing two. In the last three encounters between the two sides at White Hart Lane, Liverpool are unbeaten, winning twice, drawing once, and not conceding a single goal. A 5-0 win in the 2013/14 season was followed by a 3-0 romp the next year. The two sides drew 0-0 in North London in October of 2015, a gray afternoon that is remembered only as the first match of Jurgen Klopp’s tenure at Liverpool.

Tottenham are still without captain and goalkeeper Hugo Lloris, who is nursing a hamstring injury. Liverpool will most likely be missing Divock Origi, who picked up a knock in the Reds 5-0 victory over Burton in the League Cup on Tuesday, one that Jurgen Klopp said “was not too serious”. Emre Can is not expected to feature for the Reds either, the midfield brute with an ankle injury sustained at Burton.

Which Liverpool team shows up on Saturday will determine how this game goes, and if it’s the one we saw on the opening weekend, neutrals could be in for a treat. This very easily could be an end to end match, with lots of goals, and a serious bite to it. Tottenham are at their best when playing the truly beautiful game, but Pochettino is never afraid of a slugfest.

Look for Victor Wanyama to stay rolling for Tottenham, the former Southampton man coming off scoring his first goal for his new club in their 1-0 win over Crystal Palace. His former Saints teammate Saido Mane is another player to keep an eye on in this contest, the speedster and instant Liverpool fan favorite scoring twice in three games in all competitions. Phillipe Coutinho will be looking for a bounce back performance, he and just about everyone in a Liverpool shirt being stymied by a stingy Burnley side last Saturday. Coutinho certainly seems to like the air he breathes in North London, his man of the match performance in the 4-3 win against Arsenal just the latest in a line of quality performances for the young Brazilian when playing on the north end of the capital.

Expect an entertaining contest, with the nets certainly being rippled more than they were the last time we saw this fixture. It’s sure to be a treat, and a great way to turn another page of this comic book we call the Premier League.

For all the San Diegans…

Fans of both Tottenham and Liverpool living in the San Diego area are highly encouraged to get to The Harp in Ocean Beach at 4:30 AM on Saturday. With the Princess Pub (the home bar of the LFC San Diego supporters group) unable to open for the pre-dawn kickoff this Saturday, the San Diego Spurs (the official Tottenham supporters group in America’s Finest City) have graciously invited their red rivals to join them at their home bar, the aforementioned location by the water on Newport Avenue in Ocean Beach.

“If you support either of these clubs”, said Ben Forman of the San Diego Spurs, “you should definitely make it out to this one. Regardless of the result, it’s gonna be a great atmosphere at the pub.”

Seeing the two groups come together for this match is good to see on a multitude of levels. While there are definitely people in all of these supporters groups who have deep connections to their respective clubs, the vast majority of group members and their friends and extended families are folks who simply give a loyal following to a soccer team based 6,000 miles away from their television screens. With that being the case, it is paramount to remember that we are all pretty much the same, the only difference the color of our horse in the race on the other side of the Atlantic.

Too often, we are taught to replicate the actions of others, as if to add to the authenticity of our indulgence in a certain subject matter. In this case, the subject is English football, and when you’re as far away from the epicenter as we are here in San Diego, there’s no sense replicating animosity. Don’t get me wrong, you can dislike Liverpool or Spurs, or any club for that matter. But there’s no sense getting so caught up in hatefulness towards a team opposing your own that you forget who you are on a broader level. You are a human being watching the Premier League in San Diego, and you should probably find ways to stick together with people of a similar ilk. How else are you gonna watch the game with a bunch of other rowdies at a pub kind enough to open up at 4:30 AM?

It was a kind gesture what the San Diego Spurs have done here, and it is sure to be a fun experience for all. But if Liverpool can keep up their streak of stellar performances against Tottenham, especially in matches at White Hart Lane, it will be the Reds of San Diego walking out onto the early morning streets of Ocean Beach with a sweet feeling of Saturday morning satisfaction.