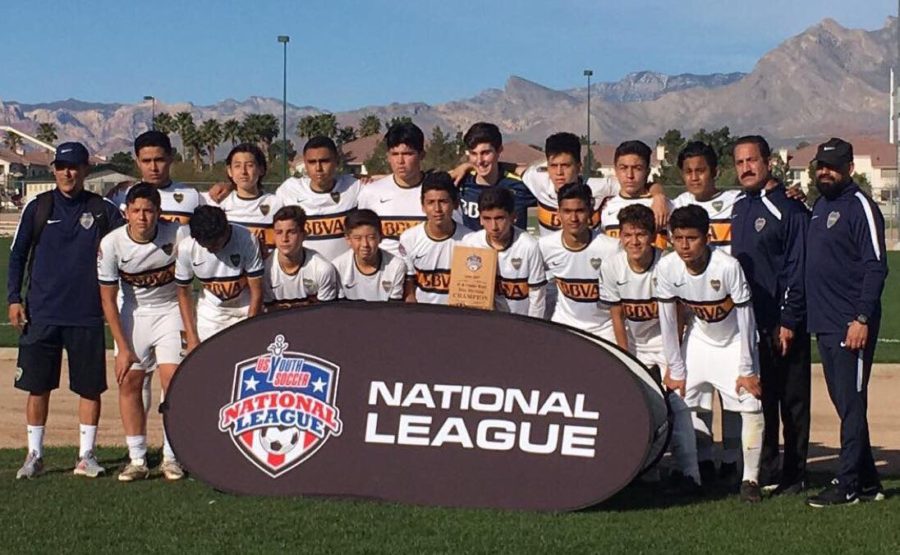 According to Merriam Webster, success is defined as a “favorable or desired outcome”. Some synonyms include favorable outcome, positive result, triumph or even Hollywood ending.

The Boca Juniors OC boys 2002 team coached by Boca Director of Coaching and Santiago Canyon Men’s Soccer Coach, Jimmy Obleda, wrote their own “Hollywood ending” recently by winning the last three games in the National League season this March and punched their ticket to the USYS National Championship.  A new team, from a new club that is less than 8 months old will be representing Cal South this July under the guidance of Coach Obleda.

Jimmy cites the growth of the team over the past few months as a key thing in getting them through the challenge of having to win three games in a row. “They grew as men, and showed a level of professionalism that I had not seen in them before.”

“Right now, we are looking to adapt our training cycle so that we will peak again in July for the National Championships in Frisco, TX. Each player is going to have to improve individually as well as a unit for us to be successful at nationals.”

Coach Obleda is no stranger to success, as a player he signed his first professional contract at the age of 17 for Danubio Futbol Club of the Uruguayan First Division.  He continued his professional career for eight years playing in South America, Europe and the United States.

Past success include his time as the Director of Coaching and Player Development for the Fullerton Rangers for 13 years. While there, he helped produce some of the top players in the country for the U.S. Youth National Teams, professional teams and universities. He has managed to send over 200 student-athletes to play at the university or college level.

Jimmy, who holds an A coaching License, has won numerous league, state and regional titles but no title is more triumphant than the 2011, 2012 back to back USYSA National and Dallas Cup titles. To this day, he is the only coach to lead a team to this feat.

His newest challenge includes working as the Head Men’s Coach at Santiago Canyon College. This season he guided the Hawks to a respectable 5-8-7, with some very close games and is looking forward to his first recruiting class coming in.

Jimmy, in addition to being a father to three kids, and a husband, also serves as a Cal South licensing clinician and in his “spare time” is working on his second masters’ degree.

Recently, SoccerNation’s Carrie Taylor sat down with Coach Obleda over lunch and discussed the state of the youth game in the U.S. to chat about what helps makes players and coaches successful. When you sit with Coach Obleda, his energy rubs off, one can see why he is able to motivate young players and make them better.