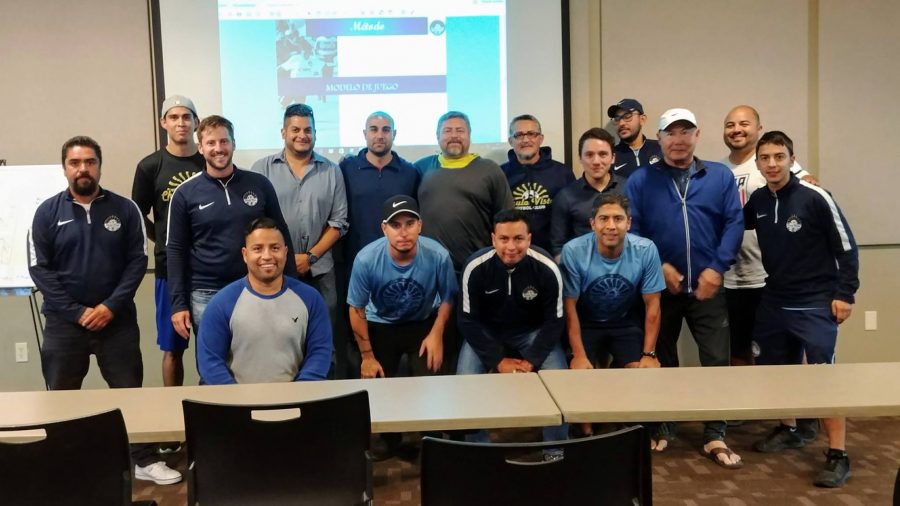 Hector Diaz believes in the city of Chula Vista. He is also a firm believer in the power of family.

As the Director of Soccer Operations and the Head Coach of the successful and rather unique U-23 squad at Chula Vista FC, Diaz has found a true purpose in life that encompasses so much of the community he holds dear.

A veteran of the United States Air Force and a lifelong student of the game of soccer, Diaz sat down with SoccerNation to discuss the current happenings of Chula Vista FC, including the club’s recent run in the U.S. Open Cup that featured a memorable win over San Diego’s Albion Pros, and their upcoming campaign in the So Cal Premier League.

In an engaging three part interview, we get to learn about the history of Chula Vista FC. Spotlighted is the club’s commitment to the local population and its long-term vision in the South Bay, as well as some of the challenges the club faces.

Enjoy a great look into the young and motivated soccer mind of Hector Diaz. Here’s Part 2 of the conversation in our latest SoccerNation Sitdown.

Nate Abaurrea (SoccerNation): “Hector, tell us where your passion for coaching comes from, as well as your overall passion for the game of soccer.”

Hector Diaz (Chula Vista FC): “It all goes back to the culture I grew up in. Soccer was embedded from day one. From the first times I can remember, Sundays were always the days you’d go to the park and watch your dad or uncles play in their local matches. They were always playing for teams that consisted of family and friends. It didn’t matter that they were just men’s league teams. To us as kids, those were soccer games, as cool as any other soccer game. Plain and simple it was an event. It was live soccer.

It’s so important for kids to see live soccer when they’re young, and to experience those kinds of things. There was always a BBQ going at the field. I remember the smells of meat and corn on the cob. As little kids, we wanted to go to those games to be a part of it, and in turn we wanted our family to come to our games.

On nights before games, I remember I would wear my socks and shorts to bed, waking up at six o’clock the next morning for games that didn’t even start until hours later.

As far back as I can go in my mind, I remember playing. Soccer has been a lifelong passion. As I got older, I developed that same passion for coaching. That has blossomed into a passion for this club and a passion for giving back to the people of Chula Vista who have given so much to me.

My family supported me through my coaching education. I started on that path right as I was winding down in the Air Force. I got my C License, then the B License, and now I’m completing the A course.

I was recently out in Arizona for the completion of the A License course, and it was such a great experience. What I’m most grateful for in the world of coaching is the relationships you get to create. In Arizona, I met and spoke extensively with some of the backroom staff from Chievo Verona in Italy. They were just outstanding, and great people to learn from.

There is a UEFA A License coach named Ruben Cano who has been helping with our club. Ruben was with us for the Open Cup run, and he’s back in Spain now. Whether it’s Ruben, the guys from Chievo Verona, or so many other people I meet during these courses, I learn so much from every one of them, and I’m so thankful for these coaching relationships.

And honestly, when I think about these relationships, I think about all the coaches I’ve known that don’t have a single license and have never taken a single official coaching course. I think about how much I’ve learned from all of them as well. It doesn’t matter who you are. We’re all capable of helping one another in some fashion. Everybody is a teacher in the coaching world.

Nate Abaurrea (SoccerNation): “Bringing this back to Chula Vista FC, tell us your thoughts on the club’s recent run in the U.S. Open Cup.”

Hector Diaz (Chula Vista FC): “Well, we were blessed with an incredible night, a game we will never forget, that 3-2 win against Albion in San Diego back in early May. We’ve had great runs in the cup before, but that was a very special night for our club.

The next week, we were on the road against LA Wolves, (the side coached by USMNT great Eric Wynalda). We went into that game very cautious. We had a plan, and we defended very well. I thought we were tightly organized, and did exactly what we needed to do. We took it to extra-time, and with the score 0-0, two minutes before it would have gone to PKs, we had a penalty called against us. Their guy scored it, and the final whistle blew soon after. It was tough, but we’re incredibly proud of our effort, and our league season is coming up here this next week, next Saturday to be exact. We’re excited for this season in So Cal Premier.

Nate Abaurrea (SoccerNation): “I definitely want to talk to you about the So Cal Premier League, but first, tell us a little more about what the U.S. Open Cup means to you and your club.”

In my view, the Open Cup is the only competition in the United States that adds true professionalism to a technically non-existent 3rd, 4th, and 5th division in our country. Until U.S. Soccer institutes rules and regulations for the lower divisions, it’s hard to really accomplish anything. Plain and simple, the Open Cup adds value to our existence as a club.

Around the world, these styles of cup competitions are magic. We’ve got something like that right here on our own American soil, and it’s awesome!

We train all year. Practice after practice. We play league games. We play additional qualifiers. And for what? The greatest reward is not monetary or anything like that. It’s the right to play in the Open Cup! That’s how much it means to us, to these players and our coaches.

We’ve tried to make sure that everyone is involved with it, that everyone knows about this tournament and what it means not only to our club but to the history of American Soccer. There’s over 100 years of history in this thing, and our players know that.

I really feel like our club embodies the spirit of the Open Cup. Tryouts for our senior team are absolutely free. We have had walk-ons become part of our team. We want to see what you got. We want you to be a part of it.

We’ve been successful with results in the Open Cup going back to 2015, and it’s all been with the core of players from those 93/94 teams, going back to the Aztecs and CVFC.

People in the South Bay know about the Open Cup now. They embrace the tournament for what it is. That’s powerful, a small community understanding what that thing means on a grander level.

That night at Albion in early May, Alejandro Guido from Club Tijuana Xolos was out there. That match was on Mexican Mother’s Day. Alejandro, his mom, and his dad came to that game! They could have gone anywhere to celebrate the holiday. They chose to come to Mission Bay High School and cheer on Chula Vista FC. Alejandro played with a bunch of these guys from the time he was six years old. He wasn’t gonna miss that experience.

There’s so much to it, and yet it’s also so simple. The Open Cup is just so special. It helps keep us going as a club.