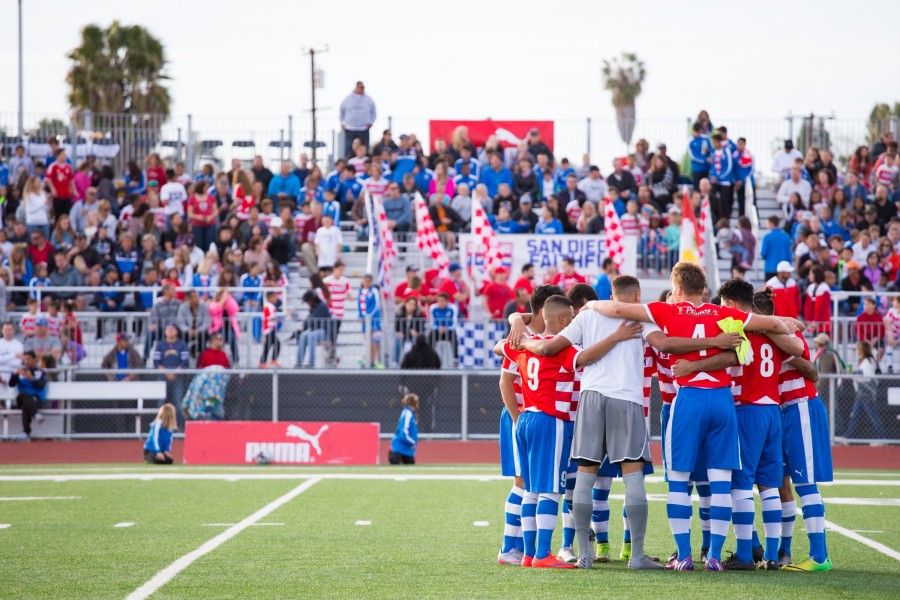 Albion Pros SC has made national headlines throughout the 2016 National Premier Soccer League season for all the right reasons. As an expansion club, they certainly arrived in style. Minutes prior to their first game, a G-Form sponsored, Albion Pros jersey clad, Matt Blanket parachuted out of the sky with the first official game ball in tow. The amazed San Diego crowd had never seen a skydiver present the official game ball at a soccer game, and neither had the National Premier Soccer League. It was a spectacular event that has only been matched by Albion Pros play on the field. Something that has not gone unnoticed by the national audience!

A few weeks after the parachute landed, Albion Pros traveled north to face LA Galaxy II reserve squad that had just started their 2016 season. Albion Pros demonstrated that they were a team to be reckoned with in Southern California as they won 2-0 on the road. The great run of form continued into the inaugural 2016 NPSL season as they rattled off three straight wins, including a decisive 3-1 win over cross-town rivals NC Battalion to claim the top spot in the league standings. Albion Pros never looked back from that moment as they went on to remain at the top of the Southwest Conference standings for the entirety of the 2016 season.

A Southwest Conference championship is a great accomplishment for any team, but Albion Pros has their sights set on loftier goals. Competing for a NPSL National Championship has always been the stated goal of the organization. Now, they are only five games away from realizing this goal. It all starts on Saturday. Details HERE: ProSoccerSanDiego.com

On Saturday Albion Pros host SoCal SC in the first ever playoff game for either expansion organization. The two teams have started to develop a fierce dislike for one another, especially considering the circumstances of their last meeting. Albion Pros edged out 3-2 win in San Bernardino, but not before earning three (!) penalties and seeing a red card awarded to standout forward Matt Clare. As one can imagine, SoCal SC was not pleased to concede three penalties as they were the first team to score multiple goals against Albion Pros all season. A chance for revenge on a grander scale awaits them this Saturday!

Now we preview the top things to look for as Albion Pros host SoCal SC in the first round of the 2016 West Region NPSL playoffs.

Matt Clare leads the Albion Pros in scoring, having scored 11 in league play to add to his 7 assists on the year. However, it is what he has done in front of goal the last three games has been the most impressive. In each of the last three games he has scored a hat-trick, including all three goals in the comeback win against Club Tijuana Xolos U20. Can he keep up this form throughout the playoffs? Can SoCal SC stop Matt Clare from imposing his will? Find out on Saturday!

Incredibly, Albion Pros has not started in the same starting 11 in sequential games all season. Even more impressive is that they Albion has only conceded 8 league goals all season. However, in a pair of pre-playoff friendlies against Club Tijuana Xolos and Frontera United, Albion has uncharacteristically conceded two early goals in each game. Against SoCal SC, they also conceded twice. Can Albion Pros Captain Luke Staats and star goalkeeper Jean Antoine shore up the backline and get back to producing shutouts, like they have for the majority of the season? Will SoCal SC be able to cause them problems, or will it be back to no-nonsense defending for San Diego Albion Pros? Defense wins championships and Albion Pros have one of the best in the entire country.

Albion Pros are the only undefeated team in the West Region but have struggled at times against SoCal SC. In the first meeting, they surrendered a 95’ minute equalizer. The second match proved to also be a difficult encounter. Can Albion Pros handle the pressure at home and prove that they deserve the accolades accumulated throughout the regular season. As they say, playoffs are a different beast. Albion Pros face their first true test of the 2016 season against SoCal SC.

Newer Post
Pro Soccer Expansion to San Diego Appears to be a Matter of When, Not If
Older Post
Soccer Training – 5 Bad Habits to STOP Immediately