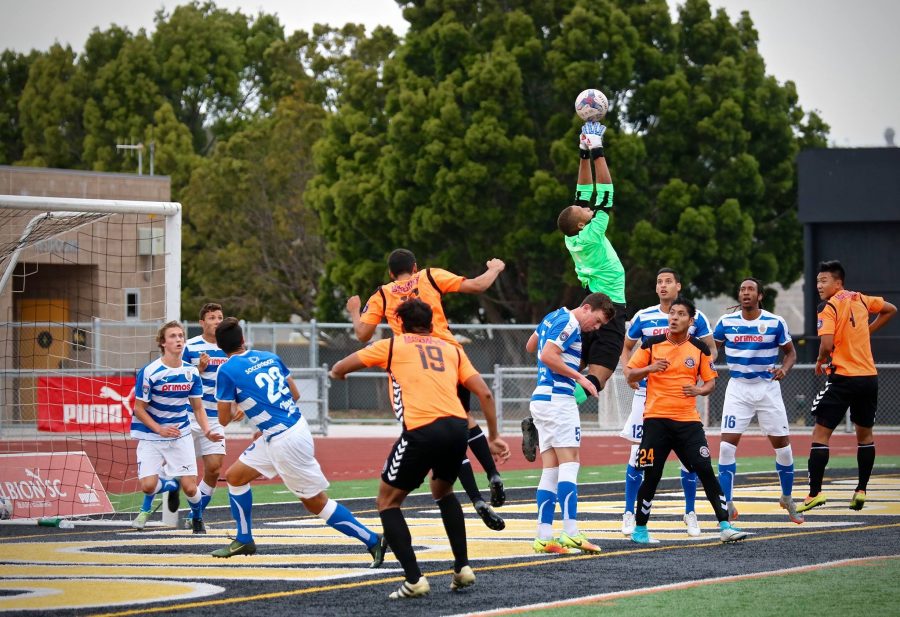 Albion SC PROS were back in Pacific Beach for one last go in front of a good sized crowd as they welcomed SoCal SC for their regular season finale.

Mission Bay Stadium was the epicenter for an affair that mirrored the clouded and dark skies, yielding a match that was as thick and humid as the atmosphere on the day.

The PROS came out looking to be the dominant, attacking side yet could not seem to combine to generate the attacks at will like we have been used to seeing all season long.

While looking forward to playoff encounters, PROS head coach Ziggy Korytoski was also thinking about the future of the squad. Korytoski gave the reigns of holding the midfield to Albion’s own homegrown product, Townsend Meyer. After 12 years with the club, Meyer became the very first academy player to start in the National Premier Soccer League for Albion.

Meyer held control of the midfield on the recovering end alongside Luis Cardona in what proved to be a solid first start for the youngster. The two seemed to have a good initial connection and continually recovered on SoCal advances, yet it was in the attacking end where the separation between the midfielders and attackers seemed spaced out.

The initial half was plagued with too many heavy tackles that seemed to cut advances in their development stages, meaning tackles were being made in unimportant areas of the pitch. Past the first 20 minutes alone, more than thirteen fouls had been called amongst the two sides.

The second half began with the substitution of Tre Hayes for Meyer who had his first taste of senior football with the PROS. “It was more tactical [to not put Tre in until the second half]. We wanted to make sure we controlled midfield and out-possessed them and wore them down,” said Korytoski. Immediately, the changes began to pay dividends as Hayes began to swirl behind Amani Walker and bounce to either flank creating lanes for fullbacks Frankie Sanfillipo and Michael Turner to make runs behind SoCal defenders.

Hayes had knocked on the SoCal goal a couple of times before receiving a long ball just outside of the box in the 52nd minute. Taking a quick glance ahead, Hayes met the size 5 with his chest to tee up Sean Callahan who struck a lovely volley strike that took a quick hop in front of the SoCal goal to find the back of the net.

The inclusion of Hayes in the second half was a major factor for the PROS taking the lead and ultimately the win. Hayes took control of the final third and began distributing the play out wide or holding the ball, looking into the box for Walker. “When I got in the game … I just wanted to be a nuisance the whole time I was in,” said Hayes. “I was blessed enough to do that and come away with a goal.”

Just minutes after the opening goal, a deliberate handball was called inside the box via a SoCal defender. League leading goal scorer Amani Walker was in charge from the spot. A cheeky soft dink down the center of the goal off the right boot of Walker saw the SoCal keeper dive to his right, yet get just the slightest of touches off his cleat to keep the ball out of the net.

The PK save was merely a consolation prize, as Tre Hayes would collect his well-deserved and hard earned goal. Michael Turner was pulling double duty, as he usually does, coming from the center back position to find Hayes with a perfectly timed cross from the right flank. Hayes collected and calmly got a touch past the SoCal keeper and put up the second and final strike of the night.

SoCal had a few more attempts towards the end of the match yet it would not suffice as the PROS were too solid in their back line comprised of Travis Nicklaw, Michael Turner, captain Frankie Sanfillipo and Sergio Enriquez were virtually impenetrable.

Up next for the PROS is a trip up to Chino for the final NPSL Southwest Conference match of the season versus the winless Sports Club Corinthians USA. A match that once again, should be a win for Albion who still have the possibility of leaping over to second position depending on certain results.

Currently Albion SC PROS are in the fourth position of the table with a total of 31 points with three points left to be won in the season.