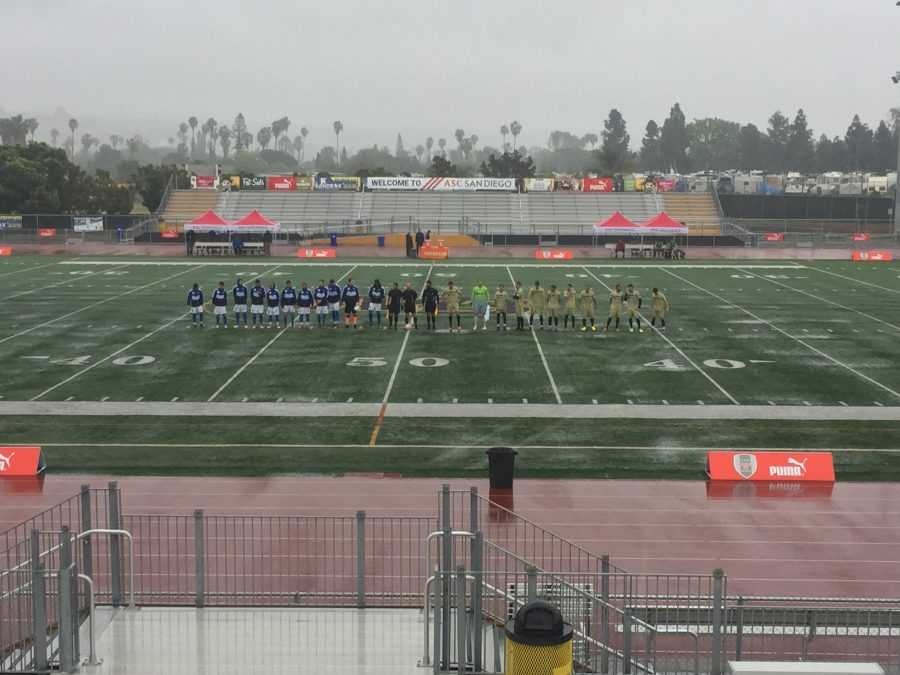 On a windswept Saturday evening in San Diego’s Pacific Beach, ASC San Diego squared up for its final preseason match against Sporting AZ FC in a thrilling, end-to-end game that finished 3-4 in favor of the visitors.

ASC’s new-look team started the game on the front foot, launching wave after wave of attack on a sodden and soggy pitch. Sporting AZ’s defense, marshaled by MLS veteran goalkeeper Andrew Weber held firm until the 21st minute when a blocked cross deflected off the arm of a defender and a penalty was awarded.

“That happens. Its wet conditions, whatever you want to say. The rebound went in so I’ll take that happily,” said Walker of his blocked effort and subsequent finish. “I’m a forward I don’t care.

Walker added a second goal when he finished a lovely sweeping sequence that ASC worked up their left side, culminating in a deliciously dinked ball that Walker ran onto, rounded the keeper and slotted into an empty net making the score 2-0 in the 43rd minute. That score would last through the interval until a hectic stretch from the 52nd minute to the 65th saw Sporting AZ FC erupt for four goals.

ASC clawed back a third goal when San Diego native and MLS veteran Eric Avila stroked home a sweet finish in the 72nd as ASC looked to wrest control of the game back from a Sporting AZ team who was in the ascendency.

“There was a 15 minute spell that we really struggled, and we need to figure that out,” continued Walker. “That’s inexcusable at any level. Once we sured that up I think the rest of the game really showed that we’re progressing in the right direction and we are doing well.”

ASC San Diego Opening Game was a great match up and offered a thrilling game with goals galore. Review the best shots from last match and get ready for the first home Regular Season game against FC ARIZONA on March 24! Tickets at https://t.co/iea3jzaHkc pic.twitter.com/bNZlwpnDRI

“Getting the guys out there and gelling together was what tonight was all about,” remarked Noah Gins. “We’ve had very few games in the preseason this year so it was really good to get out there in front of our home crowd. Getting onto our turf and establishing a good rhythm going into the season was the aim tonight.”

“It’s no doubt that our objective is to get to the final game and win a national title. That’s been the objective since year one and so for (head coach) Ziggy (Korytoski), the staff, the players, it comes with more urgency. We’ve made the necessary moves to put ourselves in a position from the standpoint of the players, the selections, the resources so we feel positive.”

Gins also highlighted Amani Walker coming off a year when he scored 20+ goals, Eric Avila and Kuba Waligorski as players who will be leaders to watch out for.