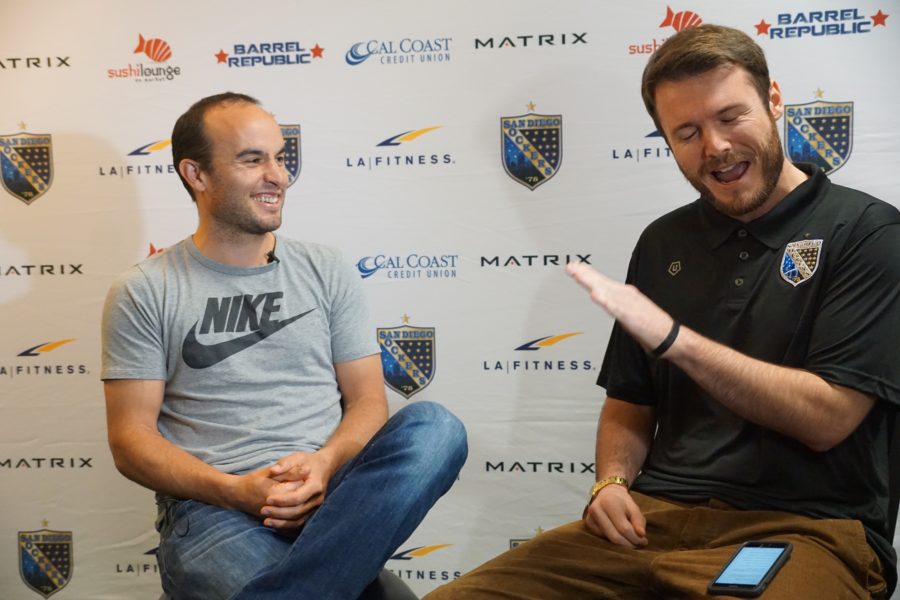 When it comes to American Soccer, you would be hard pressed to find a more recognizable name than Landon Donovan. The all-time leader in both goals and assists for the United States Men’s National Team is also becoming a familiar face to residents of San Diego, with Donovan and his family recently moving to America’s Finest City.

In conjunction with the San Diego Sockers, the indoor stalwarts who are currently on a quest for their 15th championship in franchise history, SoccerNation’s Nate Abaurrea had an in depth chat with Donovan inside the Socker’s home of the Valley View Casino Center.

In Part 3 of the conversation, Donovan speaks of his love for indoor soccer, some exciting news regarding the Sockers Celebrity Match at halftime of their MASL Playoff affair on March 12th, and memories of the last “celebrity sporting event” he took part in.

Nate Abaurrea: Alright, it’s time to bring this conversation back inside, and into the month of March. On March the 12th, the San Diego Sockers will be hosting a first round MASL playoff game at the Valley View Casino Center. There is going to be a very interesting celebrity match that night, featuring some guy named Landon Donovan.

Nate Abaurrea: Easy there! Come on! You haven’t been retired that long.

Nate Abaurrea: Well regardless of your current body shape, what are you most looking forward to about that celebrity match?

Landon Donovan: You know, it’s funny. Even though I grew up in Southern California where it’s sunny most days of the year, we actually preferred to play indoor soccer growing up. In Ontario, California, we’d go at least twice a week and play indoor with all our friends. As you get a little older, playing 11 v. 11 outdoor on a big field can be a little harder than it once was, so playing indoor is a lot of fun.

I grew up knowing the name “Sockers”. I knew the name Sockers before I knew the LA Galaxy or DC United. I never was able to come down for games, but I knew the brand. It’s obvious to me that something special has been here for a long time, and I’ve always wanted to experience it. Having the ability now to see this venue and see how incredible this place is with all the history, and to be in touch with some of the Sockers folks and have the opportunity to play in a game on that field, it’s really a dream come true, and it’s gonna be a lot of fun.

(One of the finest indoor soccer venues in the country will be rocking on March 12th.)

Nate Abaurrea: Again, March 12th is the night, the Valley View Casino Center the venue. Everyone in San Diego should come out for that Sockers playoff game and obviously stay at their seats for the halftime festivities.

Now an interesting tie in to this whole thing is that March 12th will not be the first celebrity sporting event that you have taken part in since moving to San Diego. I speak of course of last July during Major League Baseball’s All-Star Weekend, your fantastic softball hack, and you almost going oppo-taco to right field. What was that experience like, playing in the MLB Legends & Celebrity Softball Game at Petco Park?

Landon Donovan: That was REALLY fun. I think what you learn in games like these is that people who simply love sports will sometimes surprise you with their athletic ability, or athletes from a certain sport will surprise you with how good they are at other sports. The biggest takeaway I had that day was watching Drew Brees hit a softball. I couldn’t believe how far he hit the thing and how easy it was for him. I think he grew up playing baseball, but it just makes you appreciate the athletes more. It also gives these people a chance to do something they may have otherwise never had the chance to do. For me, playing on a big league field, especially at Petco Park, was another dream come true. I love baseball. I’ve watched baseball my whole life. That was so much fun, and I know this game on March 12th with the Sockers will be as well.

Nate Abaurrea: Well in these types of games, you can also see how difficult a sport can be. I encourage everyone to look up the video footage of actor and former NFL player Terry Crews, the king of the pec pop, striking out on three pitches in slow pitch softball on that same day at Petco Park last July.

Do you have any predictions for this Sockers Celebrity Match on March 12th?

Landon Donovan: You know, I’ve actually already been receiving text messages from people who will also be playing in this game, asking if they can bribe me to be on my team. So that’s encouraging. I don’t think they’ve seen me play in a while, obviously.

We also want to cheer the Sockers on and help them advance in the playoffs. That’s what it’s all about. It’s gonna be a great night.

(You can get your tickets for the March 12th San Diego Sockers MASL Playoff match, featuring the Sockers Celebrity Match with Landon Donovan at halftime, by visiting SanDiegoSockers.com. Tickets are on sale now.

You can follow the Sockers on Facebook, Twitter, and Instagram. SoccerNation and soccerloco will be on hand for the full event on March 12th. If you can’t make it to the game, you can join Marc Serber and Nate Abaurrea on MASL TV, the league’s official YouTube channel and home to all LIVE match coverage.

Stay tuned to SoccerNation.com for the final part of our special edition sitdown with USMNT great and now proud San Diegan, Landon Donovan, featuring a glorious trip down USMNT memory lane, with colorful World Cup stops in both South Korea and South Africa.

We’ll also get to know about Donovan’s soccer idol growing up, and his thoughts on one of the brightest young American Soccer stars here in 2017. Donovan also shares his thoughts on San Diego’s food and beer scene, and gives one more rally cry for the people of San Diego to get on board with the MLS to SD movement.)