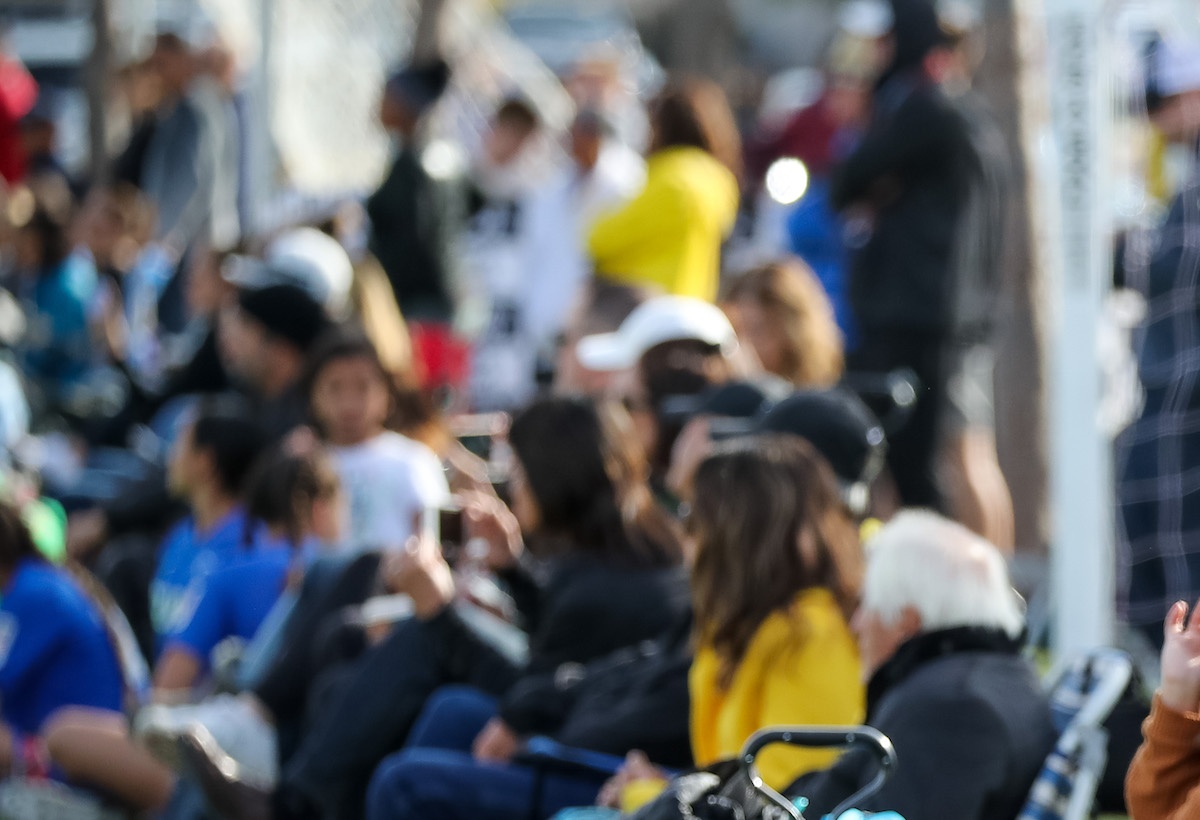 At a recent youth tournament in Temecula, a game between two teams of ten-year-old boys spiraled into absolute chaos. The older brother of a player stormed onto the field and sucker-punched a player on the opposing team. Video of the incident can be seen on NBC 7/39‘s coverage here:

Unsurprisingly, the sidelines erupted. Parents and spectators raced onto the field. Some joined into the fighting. Others raced to grab their children and take them to safety. Amidst the pandemonium, someone yelled that they had a gun. The scene that was already chaotic was sent into absolute bedlam as hundreds of people ran for their lives.

Read an eye-witness account from one of the parents here:

Andrew Firestone described on Instagram, “It was a hard fought game by both teams … when a skirmish broke out in the 2nd half between two players. As it was being broken up by the referee, a spectator ran out into the field and blindsided a the player on our team with a vicious punch. It was the most disgusting thing I have ever seen in sport. What ensued was total chaos… parents rushing out to protect their children, pushing and shoving… to the point where the referee had to end the game. Then… my worst nightmare. A parent from the other team went and grabbed a backpack and ran onto the field and threatened that he had a gun. Absolute panic overcame the hundreds of people at the fields and it turned into a stampede of parents and kids screaming and running for cover.

In the fallout of this incident, soccer clubs are faced with two issues that now require immediate attention. I spoke with Michael Duggan, director of City SC. We talked about what needs to be done immediately.

Duggan was gracious enough to take the time to talk with me and bring attention to these critical issues.

I asked Duggan what City SC is doing in response to this incident in Temecula. He told me, “This was a huge wake-up call. We have fields all over our region where we train and have games. We are looking to work with the School Districts and Parks and Rec Department for all of our fields. We want to look to collaborate with them and create emergency and evacuation plans for our members, coaches, and families. We need to have a an emergency plan for every location when we’ve got kids at these fields training. This is something we are working on right now.”

“Our first priority is always the safety of our players and families.”

“Every field will have a clear emergency plan, and every coach will know exactly what to do in the event of an emergency at a field. Unfortunately, this is where we are in our society today. But, our first priority is always the safety of our players and families. We must be more vigilant and aware than ever. All of us.”

“We will be following up with all of our families. Every coach needs to know exactly what to do in the event of an emergency.”

Duggan added, “Moving forward, I’m hearing that there are steps being taken at these big tournaments. There will be security and a police presence as well as emergency exit plans in place.”

“Thankfully, in Temecula, there were lots of routes for parents to take to get out of there. It was still terrifying and chaotic. But can you imagine if that had happened at a venue with only one exit? There is only ONE WAY OUT. That would have been horrible. There would have been a stampede. People would have gotten hurt for sure. They need to add emergency exits. I’m hearing that there’s talk underway already, and that’s great.”

SECOND: Prevention and Sideline Behavior must be Seriously Addressed

The second issue that must be addressed, Duggan emphasized, is sideline behavior. Personally, I have been to countless seminars and conventions where someone stands up in front of a room and talks about how sidelines have gotten out of control. Referees are quitting in record numbers. Parents are acting in ways that would never be considered acceptable in any other setting. Yet nothing has changed. To the contrary, with this Temecula incident as Exhibit A, it’s only gotten worse.

When our conversation turned to sideline behavior, Duggan didn’t hold back. “Every club needs to do better with this. Each and every club. It is totally asinine that some of these clubs and teams are allowed to keep joining leagues and tournaments. Any club that does not have a strict Code of Conduct should not be allowed to join a CalSouth tournament or league. Starting right now.”

“We need to get this under control now. It’s not going to be easy, but it has to happen.”

“Every club that wants to be part of a CalSouth league or tournament should be required to have a Code of Conduct that every family has signed,” Duggan said. “And there should be consistent and strict consequences when a sideline goes crazy like this.”

“This all starts with the coach.”

“This all starts with the coach. The coach’s behavior, by example and by specific instructions, dictates how the team and sideline behave. If there’s an incident on a sideline, that coach should be immediately suspended.”

“Then, that club needs to be told that they have a certain number of days to respond before they are officially put on club-wide probation. The club would have, say, 30 days or 45 days to get back to CalSouth with proof that they have taken action. Coaching education. Coaching Codes of Conduct. Club-wide coaching philosophies and behavior standards. Mandatory staff meetings addressing the issue. If they don’t get that evidence back to CalSouth, the entire club should be suspended. No leagues. No tournaments.”

“The punishment may seem harsh. Especially if it’s just one team in a huge club. But this is getting out of hand. The clubs and CalSouth need to take consistent action. Consequences need to be real. And quick. We need to get this under control now. It’s not going to be easy, but it has to happen.”

“I want the kids safe. A soccer field should be enjoyable, and not a hostile or dangerous environment.”

“This incident happened at a NINE YEAR OLD soccer game for goodness sake!”

“The repeat offenders need to be on notice. There are consistent violators, but there have never been any real consequences for them. They keep getting to join leagues. And tournaments. This incident happened at a NINE YEAR OLD soccer game for goodness sake!.”

“There should be a policy in place so that when something like this happens, that club is officially put on notice. Then, they have a certain amount of time, like I said before, to institute policies and procedures. Coaches’ behavior policies. Codes of conduct that every family has to sign. And if the club doesn’t do that in the time given, they’re suspended.”

“Cal South is the one endorsing these clubs,” Duggan added. “By granting a club official status as a CalSouth club, they’re approving of these clubs. Stuff like what happened in Temecula? It’s making the whole organization look bad. And worse than that — it’s putting kids in danger.”

“Cal South needs to step in … Safety is paramount.”

“At City SC, we are trying. We have a strict Code of Conduct for our players and parents. Ours even covers social media. If a player or a parent is in breech of the code of conduct, the coach steps in. If it’s serious enough, the board gets involved. The player could end up suspended, and they have to earn their way back. But we are only one club. Cal South needs to step in as well. They have a lot on their plate, it’s true. But safety is paramount. And this goes directly to player safety.”

“We have passed a point of no return. We aren’t just talking about ‘parents behaving badly’ any more. This goes way beyond trying to figure out how to keep refs from quitting. And how to control angry sidelines. That’s bad enough! Now, we are talking about people’s lives and safety.”

I have reached out to CalSouth for comment. I will update this story if I hear back from them. Stay tuned!