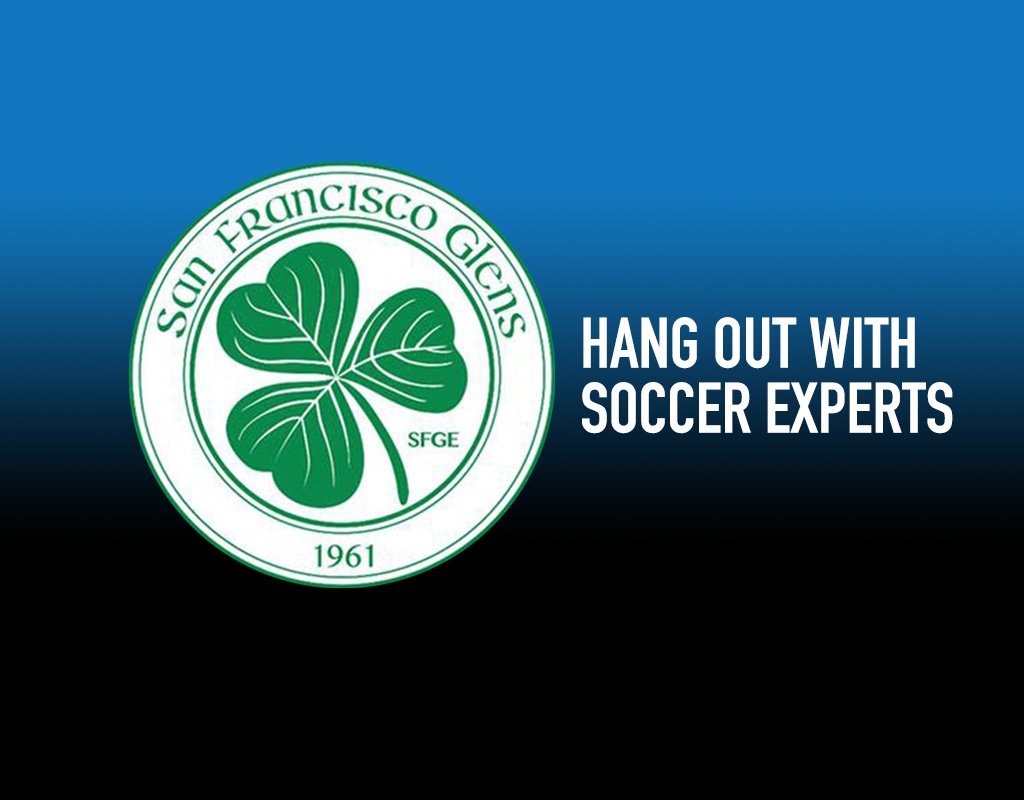 Zoom with domestic and international coaches, scouts, and former players. Open to everyone in soccer community

SF Glens has arranged for a series of Zoom calls, open to everyone in the soccer world.

An eclectic and accomplished lineup of domestic and international coaches, scouts, and former players make up this year’s edition of the SF Glens Spring Webinar Series.

Luminaries in the sport like Jimmy Conrad, Matt Martin, Roy Carroll, Kike Liñero, Christian Riecks, and Quinton Fortune are slated to share their wisdom and experience with the public via Zoom teleconference.

“Despite the unfortunate situation COVID-19 has presented, we’ve continued to seek out alternative ways to keep soccer in the minds and hearts of our players, families, and coaches,” said SF Glens director of football Mike McNeill. “We want to thank our six speakers for selflessly donating their time and energy toward the SF Glens Webinar Series and giving something back to the soccer community.”

The SF Glens 2020 Webinar Series is open to everyone free of charge and will kick off on Tuesday, May 12.

You must register below for each individual session, which will begin on the Zoom app at 10 a.m. PT / 1 p.m. ET. You can download Zoom for free HERE.

Developing a Style of Play: Defense

Jimmy Conrad is currently head coach of the San Francisco Glens in USL League Two. In the first episode of our 2020 SF Glens Webinar Series, he will dive into what it takes to develop a style of play on the defensive end.

As a player, Jimmy earned 28 caps with the U.S. Men’s National Team from 2005 through 2010 and helped anchor the back line as a starter in the 2006 FIFA World Cup. On the club level, he played 13 seasons in Major League Soccer for the San Jose Earthquakes, Sporting Kansas City, and Chivas USA, earning the MLS Defender of the Year award in 2005, the MLS Humanitarian of the Year award in 2009, and MLS Best XI honors four times. He was also selected to appear in six MLS All-Star Games and spent a stint at Lech Poznán in Poland.

Jimmy’s teams have won at every level; he retired in 2011 as one of a select few American players to have won a CONCACAF Gold Cup, an MLS Cup, a U.S. Open Cup, an NCAA National Championship, and an Under-20 Club Championship.

Matt was influential in building out youth scouting networks for the some of the top clubs in Major League Soccer. He is currently Director of Scouting for the Soccer Syndicate.

In this episode of our 2020 SF Glens Webinar Series, Matt will dive into the details of creating a scouting network and following the proper protocols set forth by the leagues.

Matt constructed the first domestic scouting network in Major League Soccer when the New York Red Bulls and Jeff Agoos hired him in 2008. He would later join Peter Vermes at Sporting Kansas City to strengthen their scouting operation; the club would capture the U.S. Open Cup and MLS Cup in 2012 and 2013, respectively. Matt’s next stop was Portland Timbers FC in 2015 under Caleb Porter and Gavin Wilkinson, where as Director of Domestic Scouting, he was part of an organization that won the MLS Cup that season.

Now with The Soccer Syndicate, Matt continues to work on the concept of discovering talent for every path meaning that each club should have its own mix of Homegrown Youth Academy developed players, domestic and international players developed in the college ranks, whether four years or less, and young pros who fit the KPIs and profiles for the club.

In this episode of our 2020 SF Glens Webinar Series, we will enter a discussion with goalkeeper Roy Carroll, who will share his journey and what it took for him to rise from the lower leagues of English football all the way up to playing for the likes of Sir Alex Ferguson at Manchester United and the Northern Ireland national team.

In a pro career spanning 15 seasons and 11 clubs, Roy won the Premier League and the FA Cup at United, the Greek Super League with Olympiacos, and amassed 45 caps at the international level. He was also named Danish Goalkeeper of the Year in 2009 for his exploits with Odense BK and received a Red Cross Humanitarian Award in 2001 after building a close relationship with a young fan who was battling leukemia.

Developing a Culture within a Club

NOTE: This webinar will be conducted in Spanish with an English translator.

Kike Liñero is the former U23 head coach and head scout of Athletic Club de Bilbao, which alongside Real Madrid and FC Barcelona are the only three clubs to never be relegated from LaLiga.

Athletic Club have also won LaLiga eight times and the Copa del Rey 24 times—all despite a signing policy that is restricted only to local players that are either born in the local Basque Country or had their youth formation there.

In this episode of our 2020 SF Glens Webinar Series, Kike will outline Athletic Club’s unique philosophy in detail and explain how the club gets the most out of its famed Lezama youth academy, which has developed a staggering 84 percent of its current first-team players. Aymeric Laporte and Kepa Arrizabalaga both got their start at Lezama before netting Athletic a combined €145 million when Manchester City and Chelsea activated their release clauses.

During his time at Athletic Club as a scout, Kike was instrumental in recommending the signings of Javi Martínez and Santiago Ezquerro, who later went on to win the Champions League with Bayern Munich and FC Barcelona. He also scouted and coached future Spanish international Markel Susaeta. As a coach for Athletic at various levels from U11 to U23, Kike helped develop the following players that have all been called up to Spain’s senior team: Fernando Llorente, Aritz Aduriz, Iker Muniain, Ander Iturraspe, Beñat Etxeberría, and Oscar De Marcos. Kike has also coached in South Korea for FC Seoul and Siheung Citizen FC.

NOTE: May 20 is a TENTATIVE date and is subject to change. Please stand by for final confirmation.

Quinton Fortune is currently the assistant coach for Manchester United’s U23 team.

In this episode of our 2020 SF Glens Webinar Series, Quinton joins us for a Q&A session. During his 15-year professional career, the versatile midfielder/left back came up through Tottenham Hotspur’s youth system before earning his first pro contract from Mallorca in La Liga.

From there, he moved on to Atlético Madrid and subsequently Manchester United, where spanning eight seasons and over 100 appearances for Sir Alex Ferguson, Quinton won the Premier League, the Intercontinental Cup, and the Community Shield. On the international stage, Quinton earned 46 caps for South Africa and played in two World Cups. In the 2002 tournament, he was an influential player for “Bafana Bafana”, notching a goal and assist in the group stage.

After his playing days were finished, he earned his coaching badges and joined Cardiff City FC’s U21’s staff as an assistant to his former teammate Ole Gunnar Solskjaer, now first-team coach at Manchester United. Last year, Quinton returned to the Red Devils as top assistant to Neil Wood for the U23 team.

Quinton also runs the Quinton Fortune Academy, which is aimed at youth players ages 6-13 and is designed to give access to a consistent high level of football coaching to a wide variety of passionate girls and boys.

Christian Riecks is the Academy Technical Director for Holstein Kiel in 2. Bundesliga.

In this episode of our 2020 SF Glens Webinar Series, Christian will discuss how the staff at Holstein Kiel sets standards and utilizes small-sided games for their Academy, where he has been since 2012. Since his arrival, “The Storks” have ascended from the fourth to the second division in Germany, and in 2017-18, they were one win away from promotion to the Bundesliga top-flight despite having the smallest stadium in the league (10,200). Several academy graduates have been called up to strengthen the first team, which was in seventh place before COVID-19 postponed all play.

Holstein Kiel entered an official partnership with the San Francisco Glens in USL League Two in the summer of 2019. To kick off the agreement, Christian and U19 coach Dominik Glawogger ran a training camp for the Glens’ U15 through U19 players in San Francisco.

Newer Post
MLS Youth Announcement: What we know and what we don’t know.
Older Post
An interview with ECNL Boys Commissioner, Jason Kutney