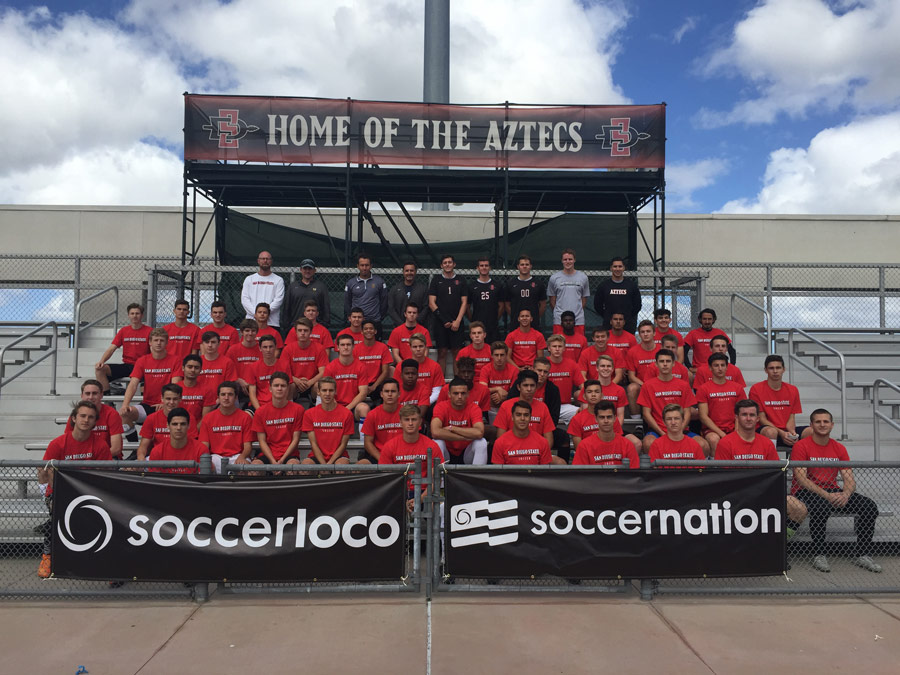 San Diego State University Men’s Soccer Team opens their 2016 season on August 26 as the Aztecs travel north to play in the Gonzaga Soccer Tournament where they’ll take on the University of Illinois at Chicago and Bradley University. The Aztecs then return home to Montezuma Mesa and welcome Soccer America’s #1 ranked University of Akron.

Coming off of the first two preseason games against Santa Clara and Cal State Northridge, San Diego State University Men’s Soccer Coach Lev Kirshner is feeling bullish about the season ahead. “Overall I’m very happy with the squad. We have a great deal of balance in the team, be it through the different classes, positions, our size, range of technical ability, and overall it’s just a good blend and we’re very happy about that.”

With nine regular starting players returning from the previous campaign, Coach Kirshner has put together an aggressive calendar for his team which includes matches against nine different schools who finished either first or second in each of their respective conference this past year. The home opener against Akron is particularly exciting. The Zips boast notable alumni such as Deandre Yedlin who recently moved to Newcastle United in the English second division and coach Caleb Porter who led the Portland Timbers to the 2015 MLS Cup Championship.

Akron has been a powerhouse soccer program for years and current coach Jared Embick has continued Akrons’ impressive tradition. Embick’s Akron teams have registered the highest winning percentage in the nation during his time at Akron. the Zips are also one of just five Division I programs to qualify for the NCAA Tournament in each of the past nine seasons.

Opponents of this caliber are what competitors live for. Coach Kirshner and the SDSU Aztecs eagerly await the arrival of Akron and invite every soccer fan in San Diego to attend the match at the Sports Deck on Friday, September 2nd with kickoff set for 7:00 p.m. PT. Admission is free to the public.