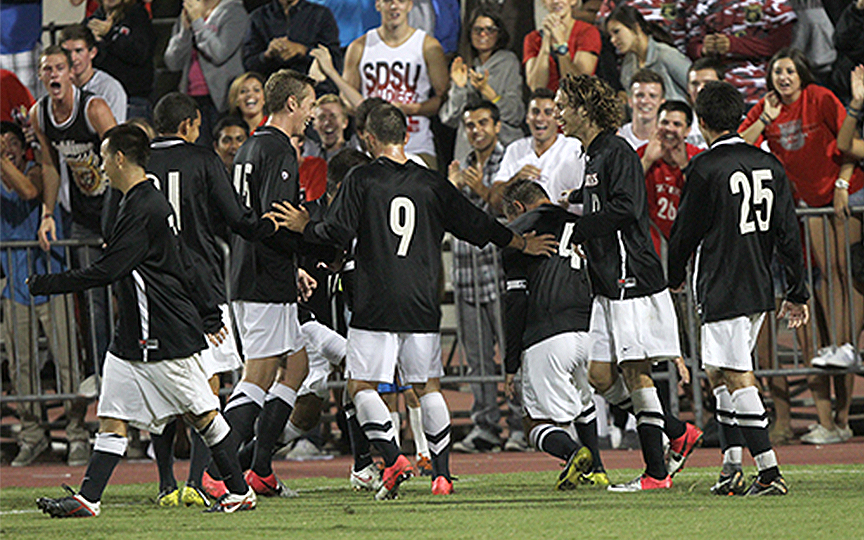 San Diego State Men’s Soccer is gearing up for the upcoming Pac-12 season with the opening match of its preseason schedule kicking off next week. The Aztecs’ 2015 campaign features nine teams that advanced to the 2014 NCAA tournament, with five of those teams being played against twice.

San Diego State is looking to improve off its stellar season last year that saw the Aztecs conclude its campaign with seven home victories, the most since 2006, as well as defeating three top-20 ranked opponents.

San Diego State’s opening game will be played on August 20th at 7 p.m. versus USD at the SDSU Sports Deck. The Aztecs will follow this match as they welcome Grand Canyon to Montezuma Mesa on the 29th of August.

The Aztecs will continue its preparation for the upcoming season with the annual Courtyard Marriot San Diego Central Aztec Soccer Tournament that begins on September 11th. The San Diego tournament will feature SDSU facing SIU-Edwardsville, the Missouri Valley champions, as well as UCI on September 13th.

The Aztecs’ conference play officially begins on the road against the University of Washington on October 2nd, along with a match against UCLA ten days later on the 12th of the month.

San Diego State will see a pair of home games that follow as they welcome UC Berkeley on October 23rd and Stanford on the October 26th.

After a series of away matches, the Aztecs will close conference play versus Oregon State on November 8th and UCLA on the 14th at the SDSU Sports Deck.

Come out and support the Aztecs next week as they begin their 2015 campaign and look to bring a title to Montezuma Mesa.