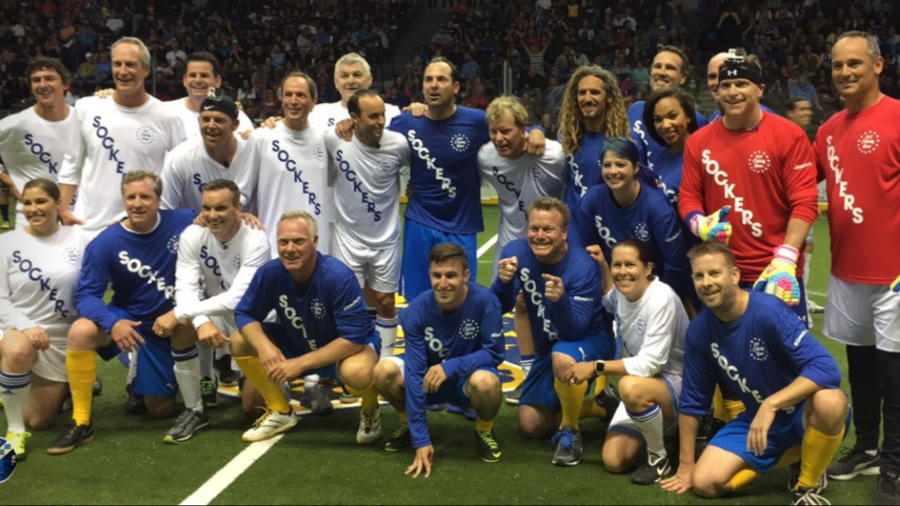 The San Diego Sockers gave their fans two shows for the price of one on Sunday night.

The Sockers defeated the Ontario Fury 9-4 in Game 1 of their 1st round MASL Playoff series, a comprehensive victory that was the epitome of a team effort. Five different Sockers players got on the score-sheet and the home side never trailed in front of 6,242 fans inside the Valley View Casino Center.

At halftime, the annual Sockers Celebrity Match took place to ample fanfare, hardly any arena patrons leaving their seats during the intermission.

The halftime match featured personalities ranging from World Cup Winners and United States Soccer legends to stars of television and radio of the local and national variety.

The all-time leader in goals and assists for the U.S. Men’s National Team, Landon Donovan, was one of the featured attractions in the halftime match.

Earlier in the night, Donovan took to the pitch during the first quarter intermission to make a brief speech for Soccer City SD alongside three members of FS Investors, the group spearheading the effort to bring Major League Soccer to America’s Finest City.

The Sockers took an early 1-0 lead thanks to a gorgeous effort from Luan Oliveira, the Brazilian cutting onto his favored left foot and curling a delightful effort to the far post to christen the scoreboard.

San Diego doubled up moments later with a quality Mexican connection, Brandon Escoto teeing up Erik Tovar to make the score 2-0. Tovar wasn’t finished, and the Socker’s number 51 would prove to be one of the focal points of the San Diego attack in a wildly entertaining first half.

Jinho Kim nabbed one back for the visitors from the Inland Empire, a sweet side footed finish past Sockers keeper Chris Toth on a well worked and quite deceptive set-piece. The score was 2-1 at the end of the first quarter.

Just moments into the second period, Tovar struck again, this time in truly stylish fashion. With the Sockers pushing forward with numbers, Tovar elected to pull the trigger from deep, his shot from just outside the attacking zone whistling beyond the outstretched arms of Ontario goalkeeper Joey Kapinos and into the back of the net via the top corner. The crowd erupted, as the Sockers restored their two goal advantage.

Tovar then assisted the speedy Brian Farber to make the score 4-1, a sweet ball on the turf to the back post putting Farber in a position where he simply couldn’t miss.

As far as the scoring went, Ontario did their best to make the second quarter a carbon copy of the opening period by getting a goal back from Leonardo De Oliveira, a cannoned blast with the right boot that left Toth with no chance to see, let alone react. But Socker’s Captain and all-time leading scorer Kraig Chiles bashed one in with a swinging left just before the break. The teams went into the dressing rooms with the score 5-2 in favor of San Diego.

Then it was time for the halftime entertainment, and the fans were buzzing as the celebrities took the field.

In addition to Donovan, who received another roaring ovation as he made his way onto the pitch, fans were treated to the participation of some massive sporting names and entertainment personalities.

Despite being branded as the underdogs, and with the heavy majority of the crowd pulling for the Donovan/MacMillan led side, the blue clad opposition was no walkover. In fact, they put up quite the fight, perhaps to the surprise of the average onlooker.

With former Newcastle United defender and current Fox Soccer analyst Warren Barton positioned as the center-back and playing a no nonsense brand of soccer that would’ve made Sam Allardyce blush, complete with proper lateral footwork and booming clearances out of the back, the Blue Team proved nearly impossible to break down.

The guys and gals in white came right back to tie the score, 1-1, the goal scored by John Weisbarth, host of Tiny House Nation. To the shock of almost all in attendance and on the field, that would be the last goal from the favorites, the Blue Team scoring twice more, former Sockers captain Aaron Susi reproducing the magic of yesteryear with a stunning half-volley from near midfield, the final kick of the ball ending the game with a 3-1 win for the boys and girls in blue.

Donovan was trying to play provider for much of the contest, and his efforts to set up MacMillan were thwarted by both Barton’s defensive skills and a horrid mistake from the match referee, who refused to reward MacMillan with a penalty kick after the USWNT great was clearly taken down inside the area. Thankfully for MacMillan, despite not getting the call or getting on the score-sheet, she found some joy in the match by nutmegging Mighty 1090 Radio Host Darren Smith, who at the conclusion of the game claimed the nutmeg was “accidental”.

The Sockers returned to the field with the arena on a high, and they had no plans of bringing any one back down.

Eddie “El Vaquero” Velez and Reymundo Reza got in on the scoring act in the second half, the cowboy placing one into an empty net in the third quarter while Reza scored on an acrobatic header off the rebound of his own karate like effort a second prior.

Oliveira and Farber each added to their totals, ending the night with a brace apiece. Oliveira and Farber’s close range finishes came after Ontario had quickly grabbed two of their own late in the fourth quarter, pulling the score to 7-4 San Diego. But it was to be a firm message sent by the home side, the 9-4 final a scoreline that was quite fitting.

The Sockers will head up to Ontario for game 2 of their MASL Playoff series with the Fury on Tuesday night. A win, and San Diego will be through to the next round where they will face off with the high powered Soles de Sonora. A loss, and the series will be decided by the dreaded mini-game, a single fifteen minute period that would immediately follow Tuesday night’s match. The Sockers are more than inclined to avoid that winner take all situation, as that was how their 2016 season came to a close, interestingly enough at the hands of Soles de Sonora.

It was another enjoyable evening inside the Valley View Casino Center, and the Sockers are hoping there are still a few of those San Diego evenings left on the docket as they continue their quest for the 15th championship in franchise history.