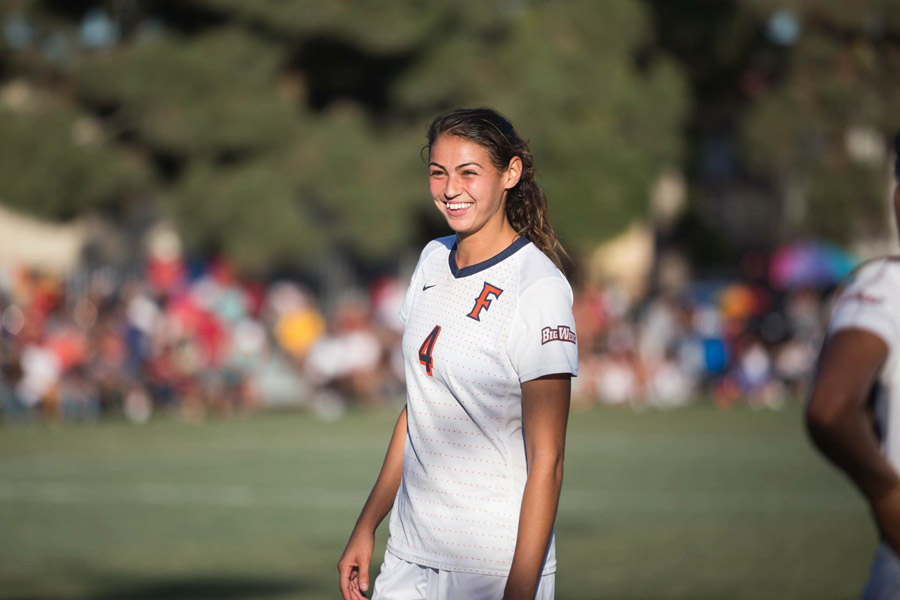 Christina Burkenroad has faced an unusual amount of adversity for the bulk of her life.

Born and mostly raised in San Diego, Burkenroad lost her mother to ALS when she was four, and she endured a stretch of homelessness for several months during her junior year of high school. At one point, the family’s search for stability led to Burkenroad living out of her father’s car in Pacific Beach.

Throughout this difficult time, soccer provided a sanctuary for Burkenroad. The consistency of training sessions and the ritual element of going through warm-ups, drills, and games allowed her to cling to some shape of structure in what was a truly turbulent time in her early life.

For much of her early career, Burkenroad played almost exclusively on boys teams. Her father first signed her up for the sport after she watched her older brother’s team play when the family lived in North Carolina.

“Growing up playing with the boys helped me develop into a faster, stronger, quicker player because as the boys grew, I wanted to keep up,” Burkenroad said. “I think my development really grew from playing with boys teams growing up. I also would play with my brother and cousins all the time. I really loved the sport. I love it and would constantly have a ball at my feet.”

It wasn’t until she moved back to San Diego and attended Mission Bay High School, that Burkenroad regularly started playing soccer with other girls. She played varsity soccer all four years of high school and set a record of 93 career goals in her time as a Mission Bay Buccaneer. Despite her excellence on the field, Burkenroad almost didn’t continue her career in college. Junior year of high school is the crucial recruiting year for potential collegiate student-athletes. Burkenroad spent that time living out of her father’s Land Rover. If not for the timely intervention of Brian McManus, who coached with the La Jolla Nomads where Burkenroad guested as a player occasionally, Christina Burkenroad may never have gotten a chance to pursue her dream.

“Well my college coach, Demian Brown, was also coached by Brian McManus. Brian told Demian about me and Demian gave me an opportunity to play D1 soccer, which was my dream. So ultimately Brian helped put me in that position and I’m forever grateful for him.”

Burkenroad described Brian McManus as, “an angel in my life,” and it is clear to see why.

At Cal State Fullerton, @CBurky4, as she is known on twitter, continued to refine and develop her game. Standing at an imposing 5’11’’ Burkenroad tallied 11 goals and 11 assists as a senior at Fullerton. She is listed as both a forward and a midfielder and while she seamlessly slots between the two positions on the field, she has yet to decide which position she loves most, “I definitely enjoy both of those positions but I feel like outside midfield is my ideal position. I like the fact that I have a bit more room to dribble. I like dribbling. Forward is always a fun position. I like both.”

That sort of enthusiasm for the game and ability to create drew the attention of NWSL Orlando Pride coach Tom Sermanni. On January 15th, 2016 the Pride drafted Burkenroad as the 15th overall pick of the 2016 class.

In Orlando, Burkenroad has the opportunity to play alongside some of the nation’s most talented players, including United States Women’s National Team stars Alex Morgan and Ashlynn Harris. Her coach at CSU Fullerton believes she’ll fit right in, “I feel strongly that she is becoming, if not already, probably one of the best 1 v. 1 attacking players in the country,” Brown said. “Because when she gets out wide 1 v. 1, you might stop her once or twice in the game, but she’s going to go at least 15 times and you’re not going to stop her every time.”

Only time can tell where the game will take Burkenroad next. First, she has to report to preseason training in early March. Then she’ll need to earn her playing time. As she approaches her rookie season as a professional player, Burkenroad can rest assured that her family, friends, and loved ones will support her as they always have.