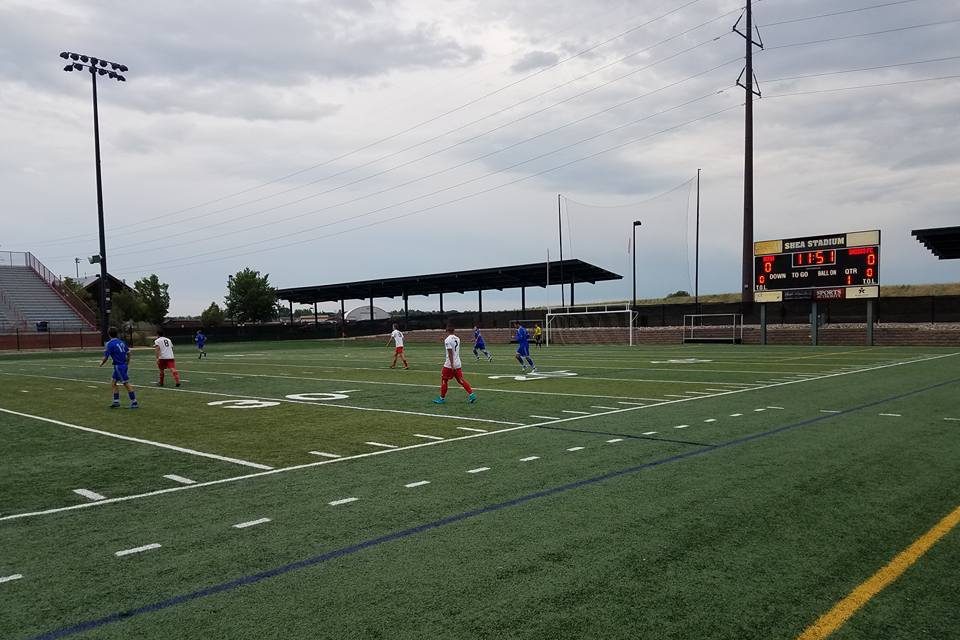 The United Premier Soccer League (UPSL) Colorado Conference continues to gather momentum and every team looks to be stronger for the fall season. The reigning conference champions found this firsthand in their opening match as Indios Denver FC handed Colorado Rush a 4-3 loss in what should prove to be a wake up call.

In the previous UPSL season, Rush started out the season red-hot and was able to find the back of the net seemingly at will, but struggled to close out games, letting opponents hang onto hope of pulling out a result.

Rush veteran and playmaker Colin Clark’s hat trick against Indios wasn’t enough as they gave up a late goal to Indios and once again failed to finish off the job and will now be looking to snag needed points in their next match.

Rush is returning a core group of veteran players for the season, but are missing some of the young guns that helped them win the conference title last season. There are some new players that will be getting on the pitch for the first time with Rush so there will clearly be an adjustment period. Rush head coach Joe Webb shared some of his thoughts on the season and the UPSL climbing the ranks and becoming more competitive.

SoccerNation: You finished at the top of the conference and earned a national berth where you were eliminated by the National Champions the LA Wolves. What did you take away from that experience and how will you approach this season to try to get back to the Nationals?

Webb: LA was a great time and experience for the team and it was great to see the teams from the other conferences from across the country play.

Right now we have the deepest pool of players in the state of Colorado and we are very blessed to be in this position as a club. In LA, as coach and manager I made some mistakes in how we managed that pool of players by not calling up some of the right players before nationals and making the proper adjustments to the rosters prior to nationals. The nationals coincided with the same weekend as most of the top NCAA schools were calling in their players for preseason camp and next year in the summer I will be better prepared for this.

We had four senior Rush Academy players, Griff Dorsey (University of Indiana), Ryan Crowley (University of Washington), Ryan Wilson (Colorado School of Mines), and Jack O’Brien (Stanford), who were called up to play for the Rush first team for the 2016 and 2017 year but were unable to attend nationals because of commitments to school, these four players all made major contributions to our team throughout all of the season and in last year’s Open Cup run.

We also had a couple of Rush Alumni but current NCAA players back for the summer that were unable to attend nationals as well. Chuck Caswell (Davidson College), and JD Michael (St. Mary’s College) were called back to college and were unable to play in Nationals.

These guys are all phenomenal young talents and we look forward to watching them in their college seasons coming up in the fall and the rest of their soccer careers.

In the future we will create better systems to manage our rosters at the end of summer and we won’t make the same mistakes next year. At this level, some of these roster changes are bound to happen though and throughout the year, when your club is developing good players and creating opportunity, the players are going to move up and move on.

Because of this there is going to always be some rotation in the rosters and revolving doors at times. It’s really just the nature of things and why it is so nice to have such a deep pool of talented players. It’s really about putting the focus on the player development side of things and helping the players get to the next level and not so much always about getting results although winning is always nice as well. Ultimately, when your playing good soccer the two go hand in hand.

So on that note we are really looking forward to the next group of young players we have coming through the academy this year as well and the contributions that they are going to make in Open Cup and the Fall season. It’s sure to be another great year and season for the team.

SoccerNation: You’ve got a solid amount of returning players but also have some holes to fill, especially between the posts. What does this mean for your fall season and how will you fill those holes?

Webb: Shailer Thomas will certainly be missed this season. He has been a major part of our club’s success over the last two years and he is an exceptional goal keeper. No one really knows it because I didn’t want our opponents to key in on it during playoffs but Shailer played those last three games with a torn meniscus in his knee. The guy has been a beast for our program and we wish him the best of luck in his future endeavors.

We are sort of blessed to have the setup and situation that we do though. We have an academy that we can always call players up from, we have players calling and emailing almost daily to try out for the team and we already have the deepest pool of players in the state. So when it comes to filling holes we have always had someone step up and it really always kind of excites me cause it just gives someone else the opportunity.

SoccerNation: Recently there has been some news about the promotion and relegation format and some lower tier teams making it known that they want a more “open” format in the U.S. just like almost everywhere else in the world. What are your thoughts on that format and what benefits do you see from it?

Webb: Well I would love to see Pro/Rel happening in the USA but because of the politics involved it’s really hard to see it ever happening logistically.

My bigger focus and attention right now is being paid to how the lower leagues of soccer are organized. USASA could be in a very special place to try pro/rel in the fall and I think we are all looking forward to this and hoping they can do this in the right way. As of right now, all the teams below the pro level are really lumped into a very unorganized and chaotic system by USASA and without having standards in place or having any set criteria for diversifying the teams at this level, it can be really confusing for the players to know what kind of teams and options they have.

So in this way it would be much better for the aspiring players to have a clearer cut picture to what the major difference between being part of the larger pro development clubs and the local city rec league teams. It’s always sad to me to see so many players have their aspirations ruined by joining rec level teams and find themselves then playing in our locally run city leagues when they are good enough to be doing a lot more with their talents.

If there were clear-cut divisions at the amateur level, then players would be able to know this when they are moving up to more competitive levels, divisions with higher standards in place, or down to a more recreational level division that plays in city parks etc.