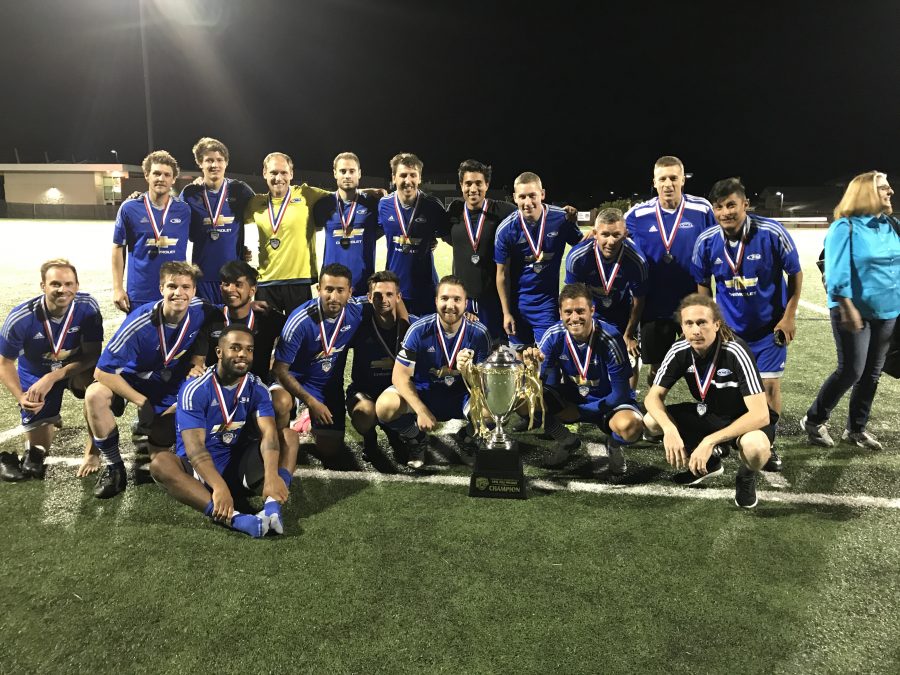 Colorado Rush put the final stamp on the season and walk away as the United Premier Soccer League (UPSL) Colorado Conference Champions after an exciting back and forth game against FC Boulder.

Boulder and Rush finished the season as the top two teams in their conference but it wasn’t an easy journey for either team to get there. Boulder had a slow start to the season and didn’t gain any momentum until midway through when they started rolling over teams to make their way to the second spot in the conference.

Conversely, Rush started the season taking names and looking unbeatable and finding goals like sand on a beach but found themselves in a mid season slump and were forced to win out the last couple matches of the season to secure the top spot in the conference.

As the playoffs started, Boulder and Rush were on different sides of the bracket and would only meet if both teams were able to advance in the first round.

Rush put together a sound performance to walk past Colorado Springs FC into the championship. Boulder was able to push FC Greeley aside and punch their ticket to the finals to meet Rush for the third and final time this season.

In their first two matches during the regular season both Rush and Boulder handed each other a loss and it would take the full regulation time, overtime and a penalty shootout in the end to decide who would be hoisting the trophy.

From the start of the match it was clear that the pace was going to be furious all night. In the first ten minutes Rush midfielder Andrew Mejia punched a shot that found the back of the net that put Rush in front early 1-0.

The first half continued as a back and forth grappling match as both teams basically split time of possession and were running at each other as Boulder was looking to find the net before the half and Rush was trying to put the match out of reach with a second goal. In the closing minutes of the half Boulder broke through the Rush back line and man of the match, Rush keeper Shailer Thomas was called upon to fend off a close chance that kept Rush up 1-0 going into halftime.

Much the same as how Rush started the first half, Boulder came out in the second half composed and starving for a goal. Not ten minutes into the half Boulder would find the back of the net off of a cross that was redirected past Thomas to tie the game 1-1.

It would remain a spirited game of tug of war between both squads but as the minutes ticked away Rush would start to get the better of Boulder. Rush forward Jacob Icolari made a clever move with the ball to slip behind the last Boulder defender and was on a straight line for the goal when the Boulder defender made a tactical foul and pull Icolari down from behind and was shown a red card and sent off.

Despite being down to ten men Boulder was able to fend off the ravenous attack from Rush in the closing minutes of the second half to force overtime. Regulation ended in a 1-1 deadlock and two more fifteen minute halves were added with no golden goal to find a champion.

The overtime halves were slower paced and more controlled than the regulation minutes as both teams were mentally and physically tired and didn’t want to give up a sloppy goal to the other. Just as the regulation time ended the overtime minutes also ended in a stalemate with neither team being able to out play the other.

It seemed only fitting that the top two teams in the conference who split their decisions during the regular season, wouldn’t be able to end the game in regulation nor in overtime and it would take penalty kicks to decide who would be crowned.

In proper “kicks from the mark” format each team selected five players to shoot and best out of five would take the win. Both Rush and Boulder were tied after the first shots as Rush midfielder Daniel Woolliscroft stepped up to take the second kick for Rush. Woolliscroft had a brilliant game on the pitch but was bullied, mugged and mangled all night and it was a miracle that he was even standing to take a kick. Woolliscroft beat the Boulder keeper with the shot but rang it off the top right post which put Boulder ahead in the shoot out.

JD Michael would step up and send his kick home that put all the pressure back on Boulder as they faced a must score situation to keep the shoot out going. The Boulder shot was low and hard to the right side of the goal but sure enough Shailer Thomas was up for the challenge and pounced on it crowning the Colorado Rush the UPSL Colorado Conference Champions for the very first time.