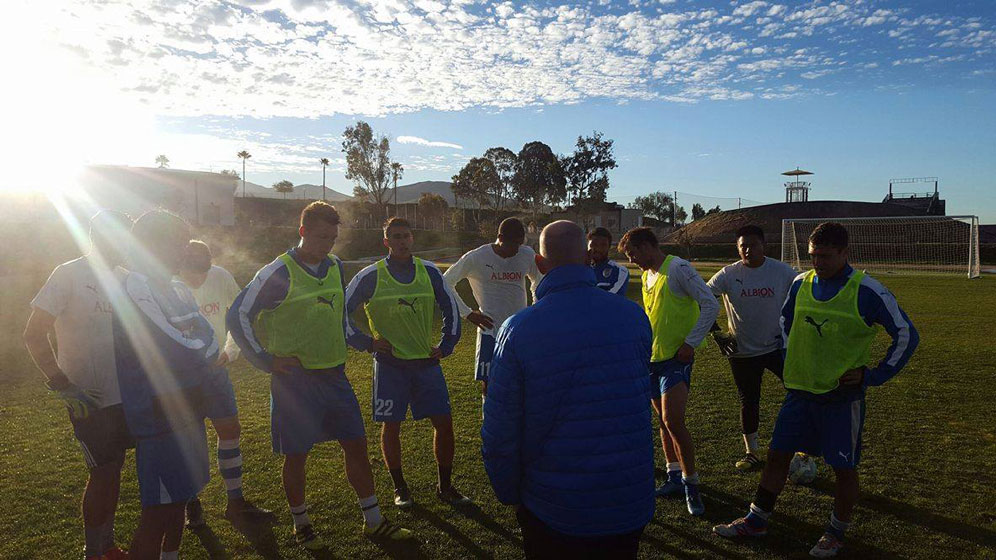 We seem to have forgotten what we already have in our very own backyard with the continuous talk and hype and most importantly, progress, of the potential Major League Soccer(MLS) expansion into America’s Finest City. Albion SC PROS, currently playing in the National Premier Soccer League(NPSL), plays host to an intriguing match this Saturday against an opponent that in this particular situation is not only a foe on the pitch, but off it as well.

Enter Phoenix Rising FC from the United Soccer League(USL), another city currently in the race for MLS expansion. Phoenix  Rising appears to be making strides in terms of attracting proper MLS talent on the field, having recently signed former Mexican National Team and Chivas Guadalajara all-time leading scorer Omar Bravo, Phoenix Rising is following in the footsteps of top Division I clubs when it comes to bringing in foreign talent with a historic background.

Whether Bravo is to be in the initial lineup, or even suited up is still to be determined, but regardless of his participation, or lack thereof, nothing will detract from what is expected to be a spectacular atmosphere at Mission Bay High School on Saturday night. Footballers with the history, accomplishments and goals that Bravo has gained in his 16-year career are something to be celebrated and witnessed.

A proper match in terms of stars aligning is already in place, but what else is to come from the PROS and Phoenix? For one, San Diego has long been an attractive potential expansion market for both the NASL and USL.

The race to plant roots in the area has become a high priority “to-do” for both Division II leagues in hopes of capturing what would be a picturesque market that already contains a solid structure on which to build, with a large fan base that positively responds to professional sports. Despite neither league being truly top flight, it is a certainly a positive step up in that direction for the city.

For Albion SC PROS, this is an important date. It is a chance to display why these leagues want to come in and build. The football on the pitch is to match and ultimately surpass not only that of Phoenix, but the expectations from the stands as well. Whether it is the USL or NASL that comes, or both, the quality and results from the season are what will ultimately bring fruition to the city and its chances for top flight soccer.

Albion already dwells in the realm of fine football. Having won their first preseason match with a stoppage time free-kick, Albion came away with a convincing, come-from-behind 3-2 win over the East Bay Stompers. With two weeks of preparation from their dramatic late victory, Albion will look to capitalize on their match fitness over visiting Phoenix as they make their preseason debut at Mission Bay HS in preparation for their own home opener March 25.

Whether it is the USL or NASL, or eventually the MLS, Albion SC PROS should continue to engage in these types of matches to continue striving towards top class, Division I soccer.

Preparation matches of this caliber serve a higher purpose than just the final result at the end of 90 minutes. It will provide a bar to measure where a team combined of home grown, collegiate and foreign players can represent San Diego in these distinct leagues.

It allows for supporters to grow with the PROS while representing the city and turn out in large numbers to show that they are deserving of a top tier club in their town. It allows for the youth clubs who have already made a name for themselves, just like Albion, to be recognized for their continuous dedication from players to coaches and parents to the implemented systems of practice and preparation that have made Southern California one of the most dominant soccer regions in the country. Albion has the opportunity to channel all of San Diego’s drive and desire for professional soccer in an area that is enthralled with the sport.

The stage is set for San Diego to begin experiencing these types of matches, with a strong, winning local side playing host to competitive teams with international stars under the lights on a Saturday night. The only question that remains is simply, who will get to San Diego first? The PROS will be waiting.

Saturday’s match kicks off at 7:30 pm at Mission Bay High School in Pacific Beach. Tickets can be bought at the gate or online at albionscpros.com

Newer Post
Club Tijuana 2-0 Monterrey: Xolos Earn a Convincing Win at Home Over Rayados
Older Post
Ask The College Coach – How Is It That College Coaches Are Done Recruiting For The Next Two Years?