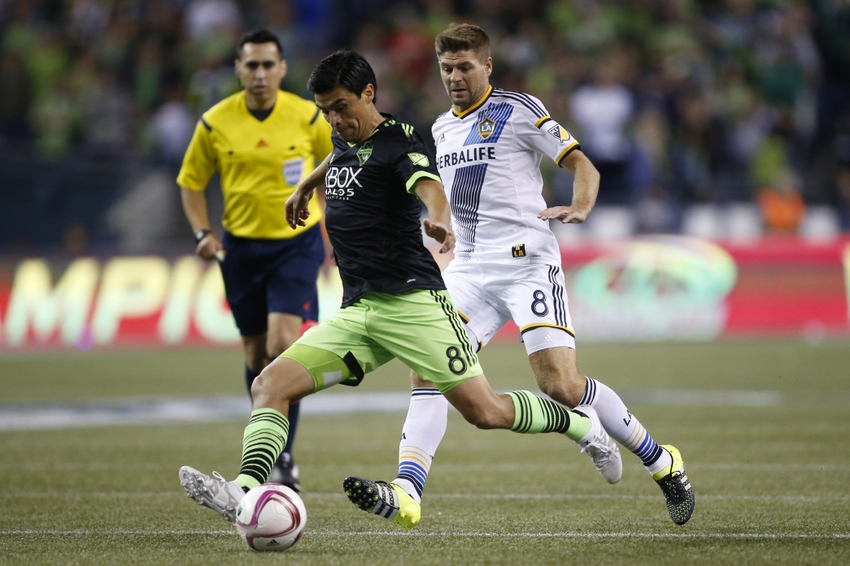 The LA Galaxy will not make it back-to-back MLS Cup championships, as they were eliminated in the 2015 MLS Cup Playoffs on Wednesday, falling 3-2 to the Seattle Sounders in the knockout round at CenturyLink Field in Seattle.

It was the first time in four playoff meetings that Seattle won, and now the Galaxy will have a long offseason to ponder what could have been.

The first 25 minutes of the game were absolutely electric, and while neither defense gave themselves much credit, the lightning-fast strikes by the respective attacks made it among the most exciting soccer seen in MLS this season.

Robbie Keane nearly got the scoring started right from the start when he had a half-chance from the opening kickoff that didn’t quite come off. Seattle really got the ball rolling in the fifth minute, as Clint Dempsey mopped up a poor catch attempt by LA goalkeeper Donovan Ricketts and slammed home a one-timer. Just a minute later, the Galaxy equalized as a quick strike down to the other end resulted in Hawthorne native Gyasi Zardes taking the ball in the box and allowing teammate Sebastian Lletget to swoop in and bury his shot.

The goals didn’t stop there. Seattle went back ahead in the 12th minute. Nelson Valdez met a long lobbed pass from Andreas Ivanschitz just in front of goal and poked it past Ricketts. LA answered once more, in the 22nd minute, as Zardes took Juninho’s hard square pass, chested it down, and sent a beautiful shot past Sounders ‘keeper Stefan Frei.

Erik Friberg put the Sounders ahead for a third and final time in the 73rd minute as a poor clearance from two Galaxy defenders bounced out to the Swedish midfielder, who finished with a powerful volley.

Given the quality of the teams, it’s a shame that one had to go out so early in the playoffs, but few expected Seattle and LA to be the fourth and fifth seeds, respectively, in the Western Conference. While the Galaxy’s season is over, Seattle will wait to see if they will play FC Dallas or the Vancouver Whitecaps in the Western Conference semifinals, beginning on Sunday.

Southern Californians in the match: