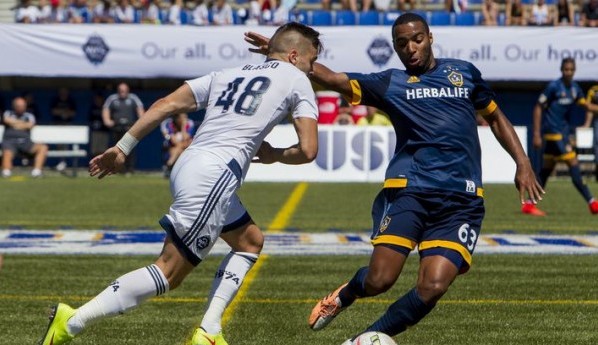 LA Galaxy topped Vancouver Whitecaps FC 2 on Sunday at Thunderbird Stadium UCB in Vancouver with goals from Travis Bowen and Ariel Lassiter to lead the way.

The first half saw a head-to-head match played out with Los Dos scoring on a counter attack just before the conclusion of the half. The counter attack was led off an interception at midfield that saw Kainoa Bradley receive the ball on the right side of the pitch to deliver a cross to a wide-open Travis Bowen to finish the goal with a header.

Southern California native Ariel Lassiter gave Los Dos the 2-0 lead after scoring just shortly into the second half to tally his fifth goal of the 2015 USL season. The goal taken from the penalty spot as a Whitecaps player was called for a handball in the box. Lassiter stepped up and finished the penalty with ease to give Los Angeles the 2-goal advantage.

The match saw a stellar performance from goalkeeper Clement Diop who tallied his third shutout of the season.

LA Galaxy II are now in third place of the Western Conference with Los Dos having won seven of its last nine matches. Los Dos will return to the StubHub Center to take on Southern California rivals OC Blues FC this Friday at 7:30 p.m. PT.