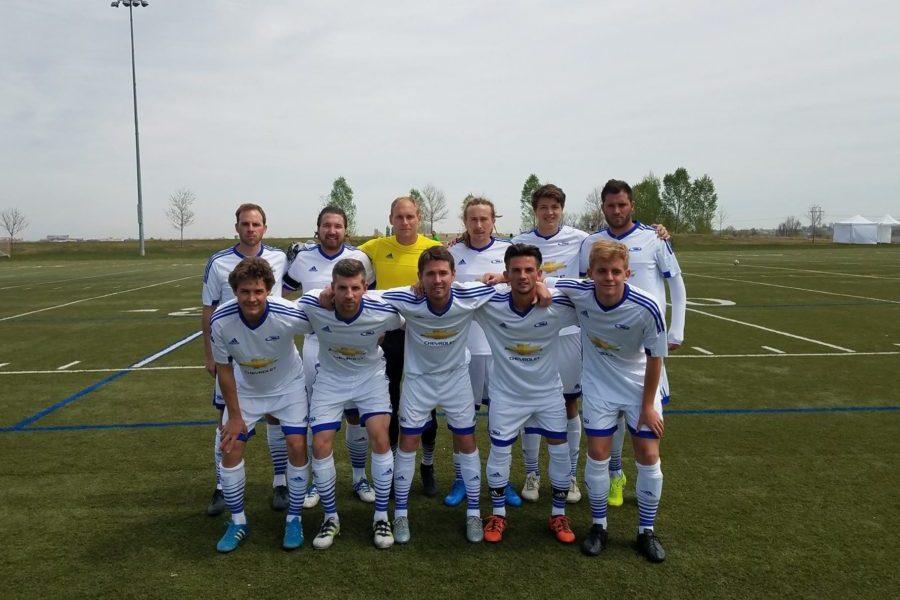 Colorado Rush chalked up another win in the United Premier Soccer League(UPSL) against FC United with a 4-1 victory and stay on top of the Colorado conference.

Rush came out with relentless pressure and were able to put United in the hole quickly in this match. Rush midfielder Ryan Crowley linked up with Nick Blanco and found the back of the net to put Rush up 1-0 in the first half. Rush midfielder Colin Clark was set on kill and found his first of three goals when he snuck past the United defense and beat the keeper to put them up 2-0.

United scrambled to find a foothold as the Rush pressure kept coming as Clark found his second goal when he sent some air mail and was able to chip the keeper finding his second goal in the first half to put Rush up 3-0.

Late in the first half United would find a lifeline as Blanco was sent off with a red card for dissent toward the ref which led to a free kick that United would convert for a goal to make it 3-1 going into the half.

Coming into the second half a man down, Rush tightened up the defense but were still able to create offensive chances. Rush would find their fourth and final goal when defender Ryan Wilson was taken down in the box and were awarded a penalty kick. Colin Clark stepped up to take the PK and put his hat on as he converted the hat trick for the day and put Rush up 4-1 which is how the game would finish.

I was able to chat with Rush coach Joe Webb after the match to get his take on the performance and the season.

SoccerNation: FC United is a quality side, what was the strategy coming into this match up if there was one? What worked well for you guys?

Webb: “We didn’t really change to much from what we have been doing over the last few weeks. Why fix it if its not broken. We may have tweaked a few things here and there and swapped a few players but overall we go into games prepared to play our quality Rush soccer every week. This week was no different, we just played well from opening kickoff.”

SoccerNation: Obviously you guys have found your stride and now sit on a four game win streak, what changed from the first part of the season when you struggled to close out games and now you are putting teams away?

Webb: “Well a few things, we have had a few players emerge from and rise through the depth charts pretty quickly. We are also finding our rhythm as a team. The players are starting to get to know each other better and better and finding the confidence that they can rely on each other.”

SoccerNation: What has been the key for the fast starts and the early goals in the last few games?

Webb: “FC United was playing pretty high to start the game so we were able to expose some space behind their backs early in the game and jump out in front quickly. Last week El Azul foolishly gave us a PK in the first few minutes, sometimes you just take what your given.”

SoccerNation: You have such a deep player pool for your team and so many players are so versatile. What does this depth allow you to do from a strategic perspective?

Webb: “Well we have been pretty fortunate to battle through some injuries this season that happened to some of our key players in the roster, but we have also had some players step up and fill in roles and mostly everyone is playing well when given the opportunity. Every week we are getting emails and phone calls from new talented players who really want an opportunity to be part of our first team and play in the UPSL. We also have such a strong academy and alumni system which helps attract very talented players as well”

SoccerNation: There are some young guys on the squad that have been getting some quality playing time recently, can you highlight a couple of them and describe what they bring to the team?

Webb: “Well as most of our Rush supporters know Griffin Dorset was invited again to duty with the U-18 National Team in Slovakia.

So we recently called up Ryan Wilson up from the Academy and he has fit in really well with the first team. Wilson is s smart and strong defender. He has really stepped up the last few weeks and embraced the chance to be part of the First Team

Then of course we have Ryan Crowley. Ryan is a really good kid. He is a hard worker on the field and does exactly what is asked of him and keeps hustling. Ryan started playing with the first team last fall in our run in Open Cup qualifying. He has now become a stalwart in our midfield playing alongside the vets.”