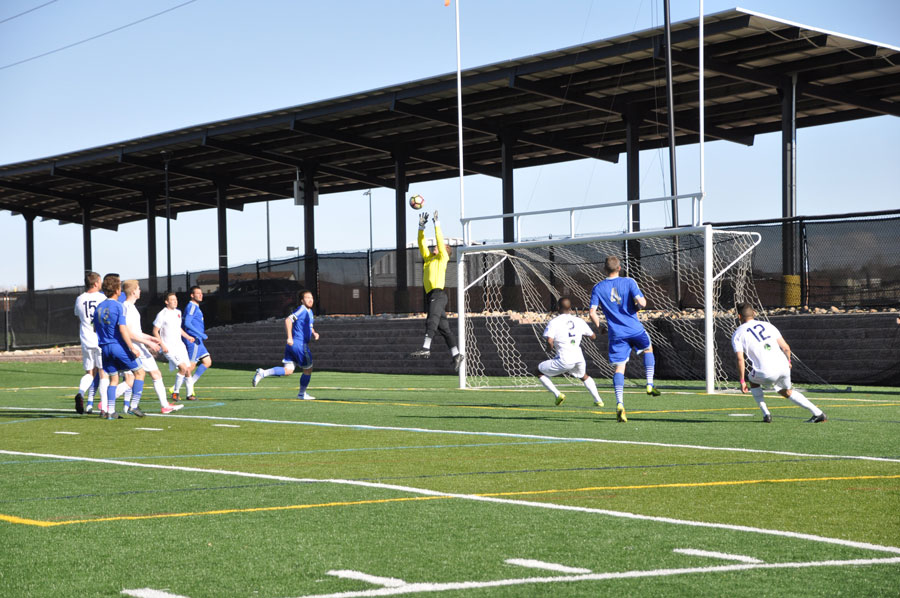 Colorado Rush will be squaring off with FC United on April 22nd which should prove to be another tough task and a hard fought game. Rush is now sitting alone at the top of the United Premier Soccer League (UPSL) Colorado conference and United is in second to last but both teams are coming off big wins. Rush notched a commanding win over Club El Azul to leap frog them in the standings and extend their win streak to three games. United found their first win of the season with a huge 4-1 win over Logrones SC.

Colin Clark and Jimmy Fitzpatrick have been playing excellent in the midfield the last few matches along with Daniel Woolliscroft and Ciaran O’Brien. Clark got himself back on the score sheet with a goal last week and will try to carry that momentum into the match up against United. For the first time in five games, Andrew White was unable to find the back of the net despite some great opportunities and will look to get back on track this week.

Along with all the veteran Rush players, some younger players have been making a cannon ball size splash this season.  Ryan Crowley has given them some speed and creativity in the midfield which just adds another weapon to the already high powered Rush offense. On the defensive side of the ball Ryan Wilson has stepped up and played excellent in his last two matches as well.

United got off to a slower start this season and have played two less games than Rush currently but were able to find a sizable win in their last match.

I was able to chat with FC United Coach Delgado briefly about the match up against Rush.

SoccerNation: How do you feel your season is going so far?

Delgado: “Our first three games were tough loses since we only lost by the minimal difference. It’s a league with good competition that offers diversity in styles of play every time you go against a different team. We like to posses and have control on the ball as we build opportunities to score. Our first three games we did a good job on possessing and controlling the ball but we failed to finish. Our last game we were able to beat our opponent by doing both, possessing and controlling and finishing.

We expect to repeat our last result against Rush this weekend by staying organized in the back and have a dynamic movement of the ball moving forward quickly in order to create opportunities to score.”

SoccerNation: What do you expect from Rush in this match up?

Delgado: “Last year Adult State Cup FC United was a underdog team. After going 2-1 in group, we played CO Rush in quarter finals. Winner from this game qualified for US Open cup. We took an early 1-0 lead which carried to half time. Rush being a seasoned team with a lot of experience and great talent managed to put in 2 in second half and qualify for US Open cup. We expect this Sunday for Rush to have a lot of skill, every player on the team is quality, depending on the game, there’s a player things will flow threw.

Our goal is to stay organized composed and finish in the final third. This game is going to be about young hungry players, vs a team that is used to the spotlight. We expect a great game at Loveland Sports Park and a great turnout from our fans.”

This should be an exciting match as both teams put up a handful of goals in their last games and could make for another busy day for the keepers.  This match up is April 23rd at Loveland Sports Park, kick off is at 2pm. Come see if Rush can keep the W’s piling up.