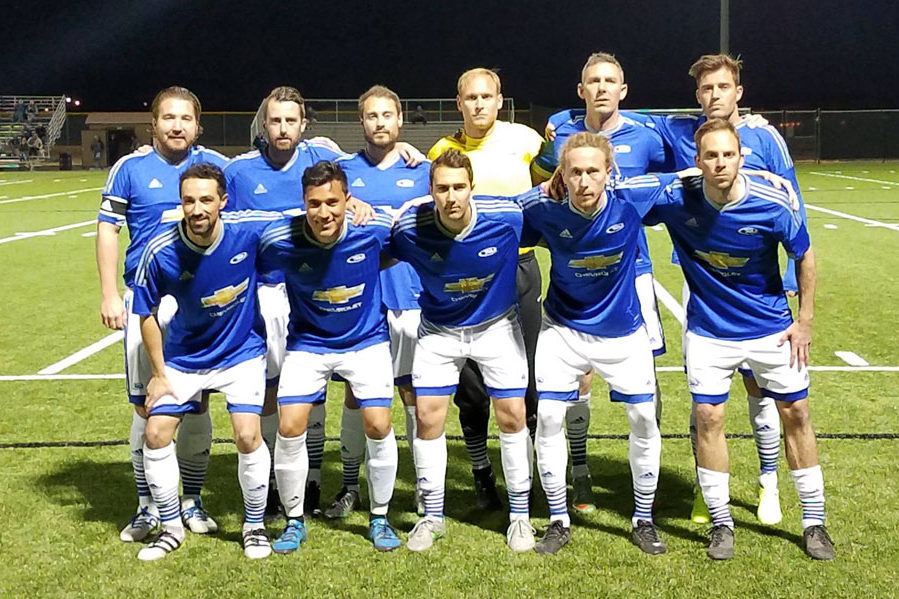 Colorado Rush has been at the forefront of youth development in America for generations. Originally founded by a union of two neighboring elite youth clubs, the organization has grown to include multiple affiliates around the country, the Rush REACH program, and a senior team competing in its inaugural United Premier Soccer League (UPSL) campaign.

SoccerNation recently caught up with the UPSL team’s captain Nic Hartman to discuss his role in the club, his assessment of youth development in the United States, and what a league like the UPSL can contribute to the American soccer community.

How do you describe Rush and your role in the organization today?

Rush is one of the largest youth clubs in the U.S. and strives for success at all levels.  I grew up playing for the two clubs that merged 20 years ago to create Rush.  I feel like my role within the club has always been as a leader and role model. Today, I am the captain of our Men’s team and help Joe Webb manage our team on the field.

I was a captain of our youth team so I was honored when Joe came to me and asked me to take on this role with the men’s team. I have that personality that leads by example and players feel that they can approach me for honest feedback and leadership both on and off the field.

What does it mean to you to be debuting in the US Open Cup at the age of 36?

To be able to play in the US Open Cup at my age is an honor.  I grew up playing with some very good players, some having played in this tournament before with their MLS teams and to still be playing at this level today and actually having an impact I feel honored.

As you mentioned, you’ve played with some people who have gone on to be fairly prominent members of the American soccer community – How would you describe Todd Dunivant and Conor Casey?

I would describe these two players as friends and teammates for a very long time. Both had very successful and long term careers at the professional level.  All three of us played youth soccer together and I knew back then that both Todd and Conor had the talent to make it to the next level. Obviously both did and did for a long time.

What about them, if anything, set them apart from their peers in the early days?

Both had the natural talent but put in the extra time to develop their skill level. Todd was always the calm, composed, smart minded player.  Todd was willing to adapt his role as a player during college to become the left defender he is known for today.

Conor was always that natural forward. Before joining our team at the youth level I always hated playing against Conor because I knew I had a tough task that day to try and shut him down.  To this day I still have never played with as true forward as Conor was.

Do you still keep in touch with those guys?

I keep in touch very limited with them.  It was a little difficult as the two of them for the majority of their careers played outside of Colorado.

How do you see American soccer progressing?

We are still a long way from being at the level of say European and South American countries. U.S. soccer is similar to other industries/organizations where politics is a major influence. Plus in America there are so many other youth programs that soccer may never surpass those to make it the top sport. Soccer however could see some growth in the years to come as parents become more concerned with their children’s health and long term well being that other sports are starting to show those long term health effects.

What sort of role does a league like the UPSL have in the future of American soccer?

This sort of league is great for the future.  Before there only used to be men’s leagues, semi pro, and pro.  I feel this gives another level for players that still want to be competitive but are not at the professional level.  Many of the players that are on teams within the UPSL all played on competitive youth teams that traveled and competed for state, regional, and national championships.  This league helps bring back that culture and competitiveness.

What sort of role does Rush have in developing a player’s pathway from start to finish?

From what I see within the Rush is that they try and develop players and all age groups and all levels.  The men’s team has always been a part of the club and the women’s team has faded in and out. Having these teams available though gives players an avenue and drive to someday play on these teams. Growing up it was always an honor to be asked to play on the men’s team and it seems like this culture is coming back to the club.  With this sort of support it really helps develop high school players to advance to college and/or the pros.

Should there be different pathways for young players aspiring to play collegiate soccer vs professional soccer?

Of course anyway to help our youth achieve their goals and dreams is encouraging.  I think the way the Rush organizations is now structured helps give a good pathway for those youth players. I know now for several years the high school age group is involved in the academy development league and this is just another example of a program helped geared to develop our youth for that next level, whatever it may be.

Where do your favorite soccer memories come from? Would it be fair to say that players should never stop playing at whatever highest level they are capable of competing at?

To be honest I have favorite memories at all levels and this is one reason why I am still playing today.  I love the game and still find joy in playing at a high level.  I grew up being coached by my dad so who wouldn’t cherish those moments? I then played for a very successful club team winning 9 straight state championships and 2 regional championships, played for a high school team that won 50 straight games and 2 state titles, I went on and played for the University of Denver for 4 years and helped build that program to what it is today, played PDL, played semi pro, and played for some successful Men’s open teams with the Denver Kickers and Colorado Rush.

That being said I truly believe that if your health allows and you still enjoy playing that yes you should never stop. I know lots of friends and teammates that regret giving it up.  Some of my best friends were/are teammates, and when you continue to play you continue to build those relationships.  Also playing sports helps shape you as a person off the field and I can thank soccer for some of my character traits today.