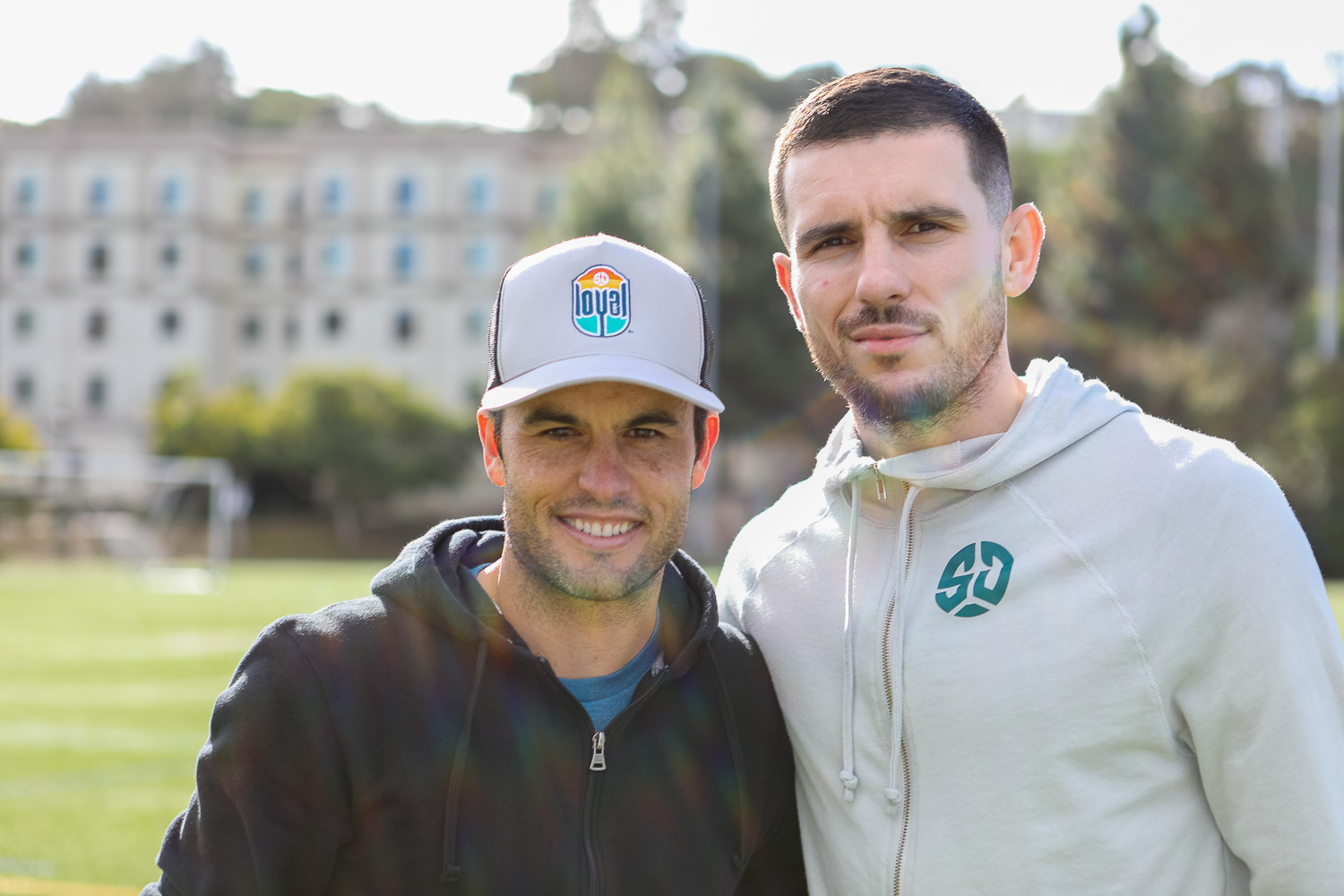 At the latest SD Loyal open tryouts, I had a chance to chat with Emrah Klimenta. Emrah (pronounced just like “Emma,” just throw an R in there) had been checking out the talent along with Landon Donovan and Carrie Taylor on the USD practice field.

As he was taking a break from the action, I asked him if we could chat so I could write up this story for SoccerNation readers. A wide easy smile spread across his face. He enthusiastically said, “Sure! That would be great!”

Klimenta was born in Montenegro, a small Eastern European nation right across the Adriatic Sea from the heel of Italy’s boot:

As a young boy, just before his teenage years, his family moved to the Bay Area of California. Walnut Creek, specifically. As Emrah continued playing his favorite sport, his talent and skill began to flourish. Professional dreams transformed instead into realistic goals.

He was playing for Mustang Soccer Club and remembers driving with his family and teammates every summer down to Surf Cup. “Yeah, Surf Cup was so fun. I remember playing in Surf Cup back then.”

I asked him what his parents were like. Just when I thought his smile couldn’t get any bigger, I was proven wrong. He laughed and said, “You know that mom on the sideline who goes ‘AHHH!’ [high pitched and short squeal] every time her boy gets touched? That’s my mom. Everyone knew where my mom was.”

What about dad, I asked. “My dad was that dad pacing the sidelines. He was pretty quiet during the games. He was great. If I had a bad game, he wouldn’t yell at me. I had teammates whose dads would get on them if they had a bad game. My dad would just say, ‘You need to be more consistent.’ That was exactly what I needed to hear. It made me work harder and keep loving the game.”

“I’m so thankful for my parents.”

He continued, “My parents were hard workers. They were immigrants and worked so hard to support the family. Every week, they would work hard so that they wouldn’t have to work on the weekends, so they could drive me to my games. It was great. I remember recognizing that even at a young age. I’m so thankful for my parents.”

At seventeen, after debating college and professional options, Emrah decided to go pro. He left for Germany, where he was signed by FC Ingolstadt 04 in Bavaria. He has also earned consistent call-ups to the Montenegro National Football Team.

After a few years in Europe, Emrah decided to return to America. He has played at Sacramento Republic, where his team won the league title for USL Championship. There were also stints at LA Galaxy, and most recently Reno 1868 FC.

While we were chatting, Emrah was eager not to just talk about himself but also to learn about me. I mentioned that I used to photograph games at California Baptist University. His face absolutely lit up when I mentioned CBU. He straightened up, and said “CBU!? So do you know Aidan Apodaca?” Of course I know Aidan. He’s a soft-spoken tender-hearted gentleman off the field, and on the field he is an absolute beast of a power forward. His 2017 season at CBU is still immortalized in the NCAA record books.

Turns out Aidan and Emrah became teammates and friends at Reno 1868 FC. Emrah was genuinely thrilled to discover a common bond in our “small world” of soccer.

I was chatting with @emrahklimenta for a SoccerNation.com article (coming soon!), and it turns out he’s friends with (and prior teammate of) a stellar guy I used to shoot years ago on the college pitch — @aidan_apodaca (what a stud). Those were fun days. Looking forward to getting some great pics of Emrah when he takes to the field for @sandiegoloyal next year. ⚽️ @uslchampionship #sdloyal #loiltothesoil

I asked Emrah about his favorite team. “My dad and I have been Chelsea fans since I was a kid. I still root for them. My dad loved Zola. I’ve never been to London, but one day I want to go to a game at The Bridge.”

Wanting to know more about his childhood, I asked Emrah who his favorite players were growing up. The answer was quick: “Ronaldo. Brazilian Ronaldo. His skill. Oh my gosh. He was so good on the ball.”

“And Zindane. He was so smooth. I loved watching him cut through teams. I would always try to play like those two guys. The way they played was insane. I loved it.

From Midfield to Defense

Noticing that his childhood idols were attacking midfielders, I asked, “You’re going to be on the back line for SD Loyal. Have you always been a defender?”

He answered, “I was always an attacking midfielder. It came naturally to me. But when I went to Sacramento Republic, the coach said he could see me as a defender.” Like any great teammate, Emrah told his coach he would play where ever he was needed. He continued, “I trusted my coach, [little laugh] and I wanted to play of course. If that meant I was going to be a defender, no problem! And I’ve really learned to love it.”

I asked him if he knew what jersey number he will have at SD Loyal. “I’m going to be number 23. I love that number. A lot of greats have had that number. [Michael] Jordan, [David] Beckham. It’s a great number. That and number ten are my favorites. I’m excited to have number 23 here.”

Emrah had to get back to observing the open tryouts, so our time together came to an end. With a smile, he told me he’s looking forward to reading this story so that SD Loyal fans and families can learn more about him.

Thank you, Emrah, for your easygoing nature, and best of luck in the coming USL Championship season!

Stay up to date on all SD Loyal news at SoccerNation