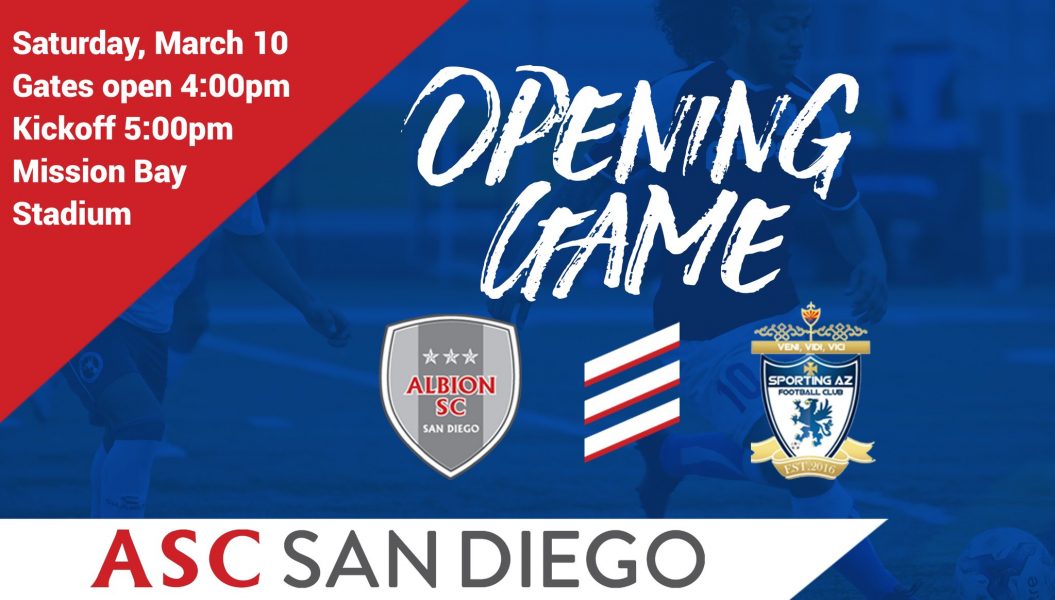 At long last, top flight outdoor soccer returns to San Diego in the form of the new-look ASC San Diego. The team kicks off its home slate of games this weekend at the beautiful Mission Bay Buccaneers Stadium in Pacific Beach in a friendly match against Sporting AZ FC, and will be competing in the National Premier Soccer League (NPSL) for the third consecutive season.

Soccer in the United States has slowly started to settle down in recent weeks following months of turmoil and strife since the United States Men’s National Team failed to qualify for the 2018 World Cup in Russia. Cries for resignations at the top end of the U.S. Soccer Federation resulted in long time President Sunil Gulati standing down from a re-election campaign and opening the floor for a hotly contested election cycle that resulted in former U.S. Soccer Vice President Carlos Cordeiro winning the top spot.

Locally, San Diego has also gone through a fair amount of strife with the SoccerCity MLS bid result delayed until November of 2018 and 1904 FC’s debut season being pushed into 2019 at the earliest. ASC San Diego kicking off this weekend offers a chance for soccer fans in this city to finally get back to the game that they love and move on from the drama of board room politics.

“We’re excited to announce our 2018 schedule, our new philanthropy model and our new fundraising partnership with San Diego-based Classy, which will help us raise money for local nonprofit organizations throughout the course of the season,” said Noah Gins, CEO and Co-Founder of ASC San Diego. “San Diego has huge potential to become a top leader in the soccer community, and we believe that ASC’s integrated philanthropy approach will lead the way on and off the field.” 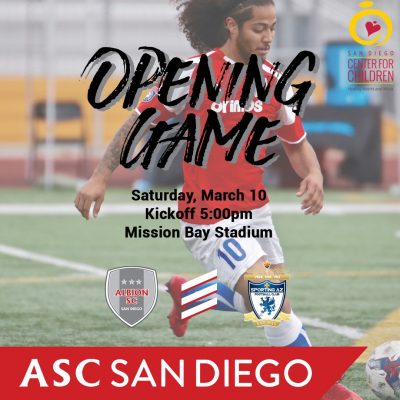 “Like ASC, Classy was founded here in San Diego, and we care deeply about finding ways to give back to the local community that has supported our own growth through the years,” said Scot Chisholm, CEO & Co-Founder of Classy. “ASC’s unique philanthropy model challenges the status quo of how sports teams are typically led, so we’re inspired and thrilled to support their efforts to strengthen our community through the game of soccer.”

ASC San Diego returns with Head Coach Ziggy Korytoski reprising his role for the third year running. Under his leadership, ASC has achieved greatness on the field during the regular season, and will continue to look to push deep into the post season as the club hunts for its first National Championship.

The Sporting AZ FC team visiting Mission Bay on Saturday will prove a tough opponent for ASC. Sporting competes in the United Premier Soccer League, and in 2017 finished in first place in its own conference. Following this exhibition match on March 10, ASC opens up their competitive calendar on March 24th at home to FC Arizona who in its debut season in 2017, finished top of the table in regular season play, mirroring the same feat ASC accomplished in 2016 during its own maiden campaign.

“This is our last preseason match, and I can’t think of playing against a better opponent than ASC San Diego. It will be a great measuring stick for us as we head into our UPSL season. They are a great team and organization, and both teams will bring it strong Saturday night,” said Sporting AZ FC General Manager Tim Marchisotto.

There is no better way to kick off the 2018 season than with a match of two powerhouse clubs looking to build on solid foundations and continue to raise the bar of excellence in soccer. Tickets can be purchased at ASC San Diego’s website for the March 24th regular season opener, kicking off at 5:00pm.

Newer Post
The Xolos Podcast: While Xolos are gaining momentum in the Liga MX, problems begin to arise in the CCL
Older Post
Los Angeles Premier FC Believes in Development