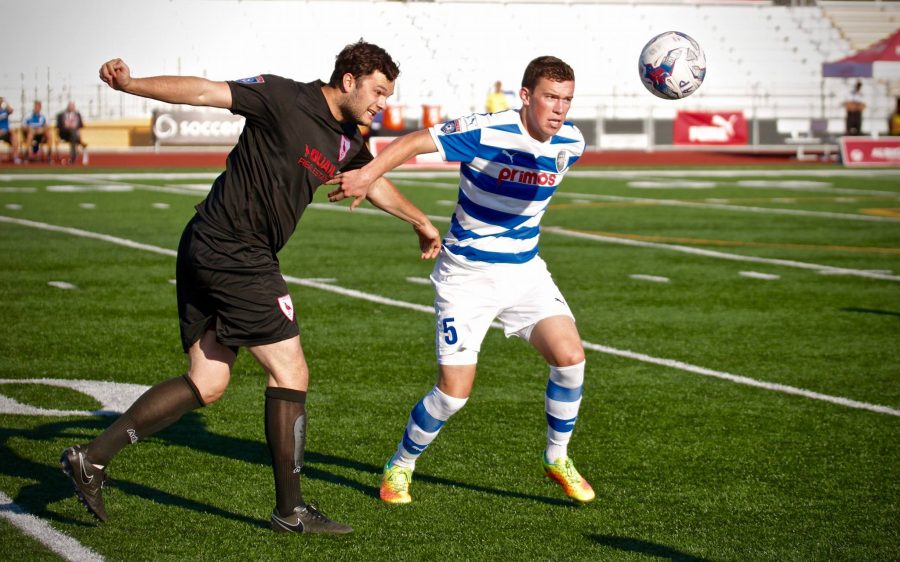 Albion SC PROS were back at home Saturday night in Pacific Beach for another potentially pivotal match in the National Premier Soccer League.

Going into week 13, the PROS were keen to extend an impressive unbeaten run in the Southwest Conference to 7 matches in succession. To do that, the PROS had to get past a Temecula FC squad that was right on their heels sitting just one position behind Albion in the conference standings.

Mission Bay Stadium was the scene and the blistering artificial turf was the stage for what would be a blazing match that started off in favor of the visitors.

Temecula started the game on the front foot and began pushing lines high into Albion territory from the getgo. The fast paced press was beneficial to the away side as they managed to produce a number of chances for PROS keeper Jean Antoine to deal with.

The only problem with Temecula’s tactics is that the PROS are known for match fitness. Trying to outpace and press Albion does not necessarily work for 90 minutes. Albion is capable of running until the last whistle and beyond.

The pace lasted about 20 minutes for Temecula, then the PROS won possession of the size 5 and began to take control of the affair.

In the 25th minute Michael Turner won a ball in midfield just inside the Temecula half and quickly sprinted towards the box. Turner looked up and placed a lightly touched ball onto the right side of the box for captain Frankie Sanfilippo, who was making one of his typical runs on the flank, who took a fist time strike across the keeper and into the far post. 1-0.

The PROS had a bit of tweak in the tactics starting the match with two attackers, league leading goal scorer Amani Walker and Tre Hayes, and sending center midfielder Felipe Liborio wide right while the middle was occupied by Michael Turner, Luis Cardona and Luan Oliveira.

For the start of the second half, Korytoski reverted back to what has been working so well for the PROS. Tre Hayes was sacrificed to give way for David Luquen, thus sending Liborio back into his natural position while Luquen took control of the left flank.

The changes proved to work almost immediately as the second goal of the match came quickly, in the 52nd. Luan Oliveira found Turner in the box, Turner then looked to play a ball to the far post, Amani Walker slid and outstretched both legs to get a touch on the ball, powering it into the back of the net for his eleventh goal of the season. 2-0.

While the PROS were still riding the wave, Temecula made it more of a game by adding a strike of their own in the four minutes later. Joseph Dicarlo received a chipped pass in the box, took a deft touch to his right and beat Antoine. 2-1.

The PROS regained the two-goal lead in the 69th minute. As Sean Callahan entered the match, the PROS went forward. Amani Walker was inside the box again and took a delicate flick with his back to the goal into space for a fresh Callahan making a solo run into the box to beat Temecula keeper Mitch Foster. 3-1.

Another important win at home for the PROS who are in arms reach of playoff football by further distancing themselves from Temecula FC. Next for Albion is a massive match as they travel to Irvine for their match with 2nd place Orange County FC.

“Momentum is the biggest thing,” said Amani Walker,  “Orange County next week, that’s the biggest thing, that’s our stepping stone. They got us here, we can’t let that happen again. We need to propel ourselves to get a result up there”.

On his league leading 11th goal and assist, Walker said it was simply “Its what I need to do”.

Walker is focused on his function within the pitch, which mainly consists of scoring goals but also generating them.

“I just want to be able to create. I’m actually happier for the assist that I got than the goal, that means we created and were actually having some good movement up front”.

Albion SC PROS currently sit in the 4th position of the NPSL Southwest Conference with 25 points with three massively important matches remaining in the hunt for playoff football in San Diego.