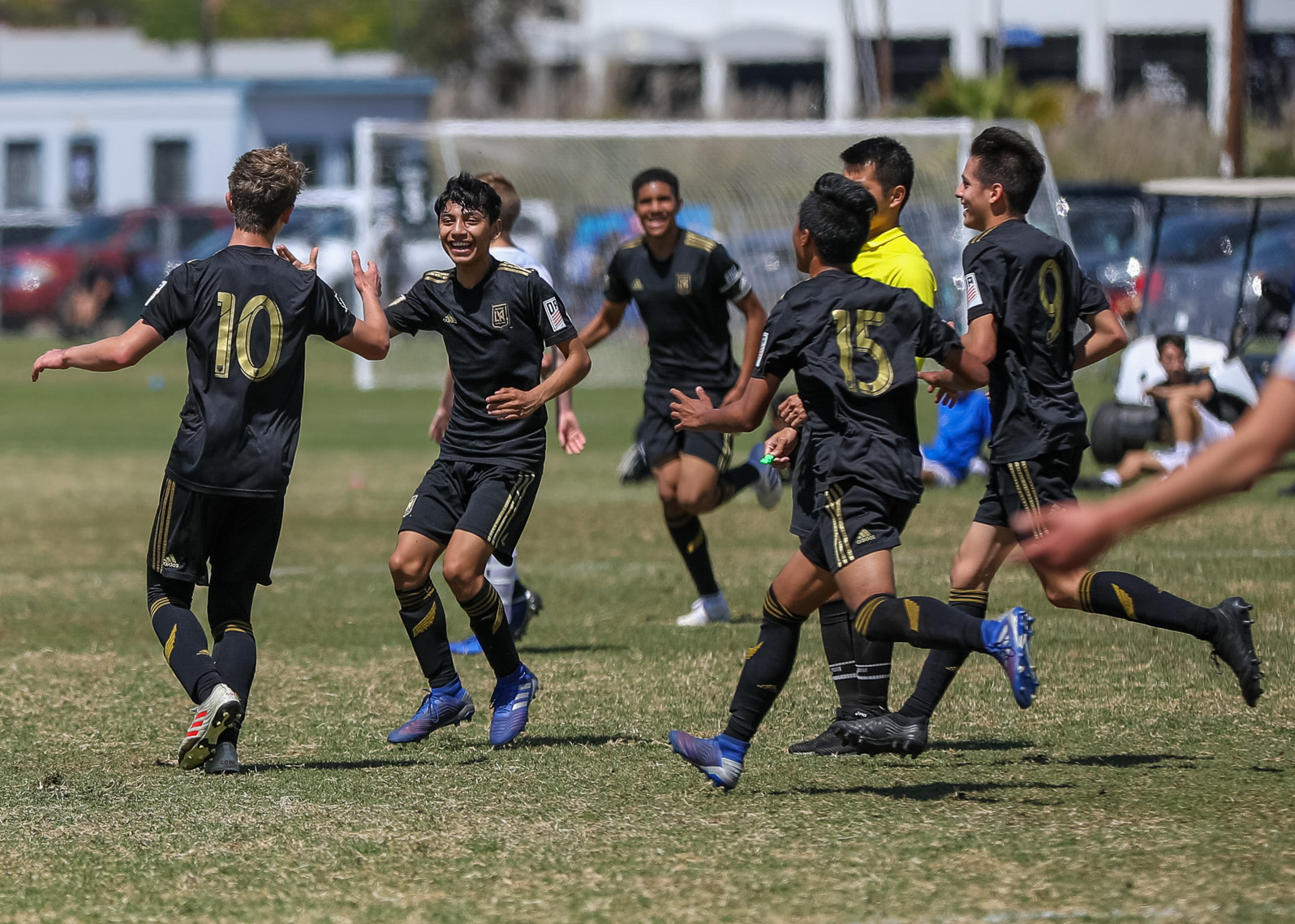 After years of Development, LAFC is Ready for Its First DA Playoffs

Back in 2016, LAFC didn’t have a stadium.
Or a head coach.
Or Carlos Vela.
MLS had awarded a franchise to Los Angeles, but they wouldn’t play their first game in the league until 2018. They did, however, have an Under-12 US Soccer Development Academy team.

From the ground up

LAFC ownership had decided to start small and build from the ground up. They would start with a single U-12 team, and those little dudes would grow the franchise. With no shortage of soccer talent in Southern California and Los Angeles, Academy Director Todd Saldaña could have easily built a fully loaded DA covering every age group. But that would mean bringing in older players with set playing styles and personalities, less moldable to the style of play and character that LAFC wanted to build.

The wait is over

The youngest age with DA playoffs and championships is U-15. Younger ages in the DA do not play for championships. For the first two years of their existence, LAFC grew their style and their play, playing seasons of DA soccer without standings or playoffs. This year, those young players who kicked off LAFC’s existence back in 2016, are U-15s. They clinched their playoff spot with weeks left in the DA regular season. On Thursday June 20th, their group round of the U-15 Development Academy playoffs begins in Oceanside, California with a game against Philadelphia Union. The boys and the entire club haven’t just been waiting through this season for playoffs to begin. They’ve been waiting for years. And their wait is finally over.
Scroll down on THIS page to see their schedule.

A solid weekend for our @lafcacademy.

A few weeks ago, I was at a regular-season DA game where LAFC was playing San Diego Surf. While U-15 head coach Cristiano Scapolo managed the game, I spoke with Saldaña to learn more about LAFC’s DA program. I wanted to know about this team, the LAFC philosophy, and how they’ve built their DA program.

SN: Can you tell me more about the team’s and the club’s playing style?
TS: Our midfielder is our leading scorer. We love that. That tells you a lot about us. We train a dynamic attack and quick transitions. Being able to shoot and pass with both feet is hard for younger players, but they know it’s important to us. So we love it when we see them take chances with both feet. One kid just scored [here against Surf] with his right foot, and he’s left-footed. That’s great stuff. He knew the keeper was a little off his line. He saw that before he even got the ball, and got the goal with his off foot. Love it.

Where does LAFC find players?

SN: A lot of non-MLS DAs accuse MLS clubs of “poaching” players, using games as simply scouting opportunities. How do you find your players?
TS: We’re always scouting. We’re a pro sports team. Years ago, clubs would lose a whole team to bigger stronger clubs. Five, six, seven players at a time would leave together. Of course that hurts a club, and we don’t do that. It’s a lot different now. We look for certain players to fill specific needs. We’re not looking to take entire groups of kids, ever. We have specific needs on our teams, and we’re looking to fill those slots with individual players who are a good fit for our system here.

“We have great cooperation with non-DA clubs.”

“In Europe, a youth club sees it as a huge compliment for one of their players to move to a pro club.”

TS: We have partnerships with clubs that are nearby, where maybe we have a player that’s great but just below the level of our roster, so he’s never going to get enough playing time. We’ll send them to another club with great training and coaching where he can get the playing time he needs. And those coaches send us players who are ready for the next level. It’s a great partnership. In Europe, a youth club sees it as a huge compliment for one of their players to move to a pro club. It’s becoming more that way here. That’s the way it should be. That’s the goal. Working together.

SN: How do you find your players?
TS: A lot of times, players and parents approach us. We take a look and see if that player should have a trial with us. Or, if we’ve ID’d a kid who we think could fit our program, I call that club’s director. That’s what I always do first. If that director is willing to work with us, then we invite the player to train with us for a week. It’s not automatic. Just because we see a player we like, we don’t know for sure if they’re going to make our team. It’s a process. They have to see if they like the culture, the practices, the environment, the coaches, the drive. [We both sadly laugh, again, about dreaded LA traffic.]

“Sometimes he’s not ready, but that kid still got a great experience.”

TS: And then after a week of training, we talk. We’ve seen both results. Sometimes after a week of training with us, we all agree we want to sign this kid. And we move forward with that. Maybe it won’t happen until next season [because of transfer rules]. That’s fine. Sometimes he’s not ready, but that kid still got a great experience. He got to train in a professional environment in a pro franchise. He got to see what it’s like. And sometimes, he hears from us the same thing that his coaches have been telling him he needs to work on. So he goes back to his club more motivated. Sometimes he’s disappointed, because of course he wanted to make it, but it’s still a great experience.

How far are these families driving to get to LAFC training?

SN: You train four days a week at Cal State LA. That’s a huge commitment for families with young players. How far are parents driving to get their kids to training?
TS: We have a kid from Coachella, and we tried to talk them out of it. That’s a long drive. He’s a younger player, but he is dedicated. We told the parents, do it for a week, and see if the kid hates the drive or if he’s still passionate about it. But we’ve never had a kid quit because of the drive. The environment we provide is worth the drive for them.

With an eye to the future, and hundreds (if not thousands) of players heading to Oceanside for the 2019 DA playoffs, I and everyone at SoccerNation wish LAFC good luck! Have fun, boys! See you on the field.