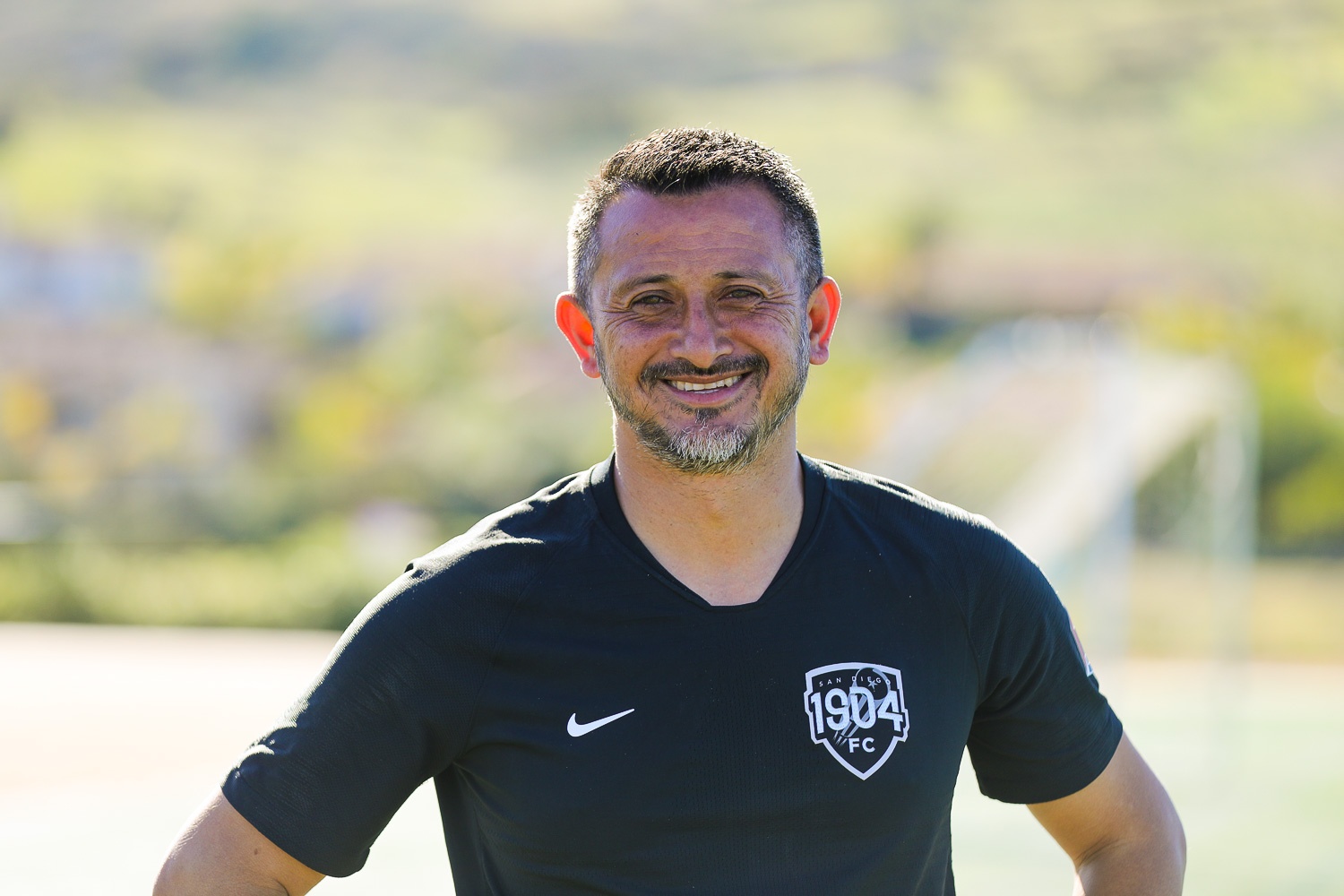 A Morning with 1904fc and Head Coach Alexandre Gontran

During a week of pre-season training in San Diego, I met with the 1904fc team and coaching staff to talk about the club, the founders, and the upcoming season.

Gontran was kind enough to take time away from training his team to talk with me about the club and its future.

1904fc was founded by Gontran along with Demba Ba and Eden Hazard. Gontran explained, “Demba especially has a huge passion for youth development. Demba and Eden wanted to start a youth club. I wanted to help. We all knew that it had to be in America.”

Gontran continued, “It had to be here. There is so much talent here in America. And it’s true that they say America is the ‘Land of Opportunity.’ We went all over the country. Miami. East Coast. West Coast. Arizona. Everywhere. When we got to San Diego, we knew the team had to be here.”

“There is so much youth talent here, and the soccer culture here is amazing. I’ll admit, we didn’t know how difficult it would be to find fields, though.”

After their 2019 season, 1904fc has moved their home field from SDCCU Stadium to Lincoln High School in San Diego. I asked Gontran the reason for the move. He shook his head and exhaled with the exasperated expression that is shared by anyone who knows about the difficulties of finding soccer fields in San Diego. “Finding fields here is not easy. The weather is great, and the people are wonderful. But finding fields is so hard. Our league [NISA] is very strict about where we can play. Last year, we had to have a field that was FIFA regulation size. And it had to be natural grass. The venue had to meet strict requirements, too. There aren’t many fields in San Diego that met the NISA requirements.”

“We were at SDCCU Stadium, but it was so expensive. They charged us $55,000 PER GAME to use that field. We couldn’t afford to keep paying that amount. But there aren’t many fields in San Diego that meet the NISA standards. We went to the league and asked for help.”

After their 2019 season, 1904fc has moved their home field from SDCCU Stadium to Lincoln High School in San Diego. Gontran continued, “We’ll be at Lincoln High School for 2020. It’s turf, but we got a waiver from the league. The field is FIFA size. And it meets the ‘entrance and egress’ requirements for our league.”

I asked Gontran about Oceanside. When 1904fc was first launched, plans were announced for a stadium in Oceanside at the So Cal Sports Complex. “Well, we were ready to go with Oceanside when we first founded the club. we were going to build a stadium there. Demba and Eden and I were ready to go. We were going to pay for the entire building and improved parking. All we needed was the city to get us water and power. It didn’t happen. They couldn’t get it done. I think that’s for the best, though. Now that we’ve been here a while, we can see that Oceanside is a bit too far north. We want to be more central. A lot of our fans and families are in central and south San Diego, and Oceanside would have been too far north.”

Where would 1904fc’s dream home field be located? I asked Gontran, and he answered, “That’s a good question. Loyal has a great home field at USD. That’s going to be great for them. I’ve heard people say that UCSD is thinking about upgrading their track and field stadium to be a soccer stadium. That would be ideal. Grass. Fifa size. Their field now doesn’t meet the ‘entrance and egress’ requirements for our league. But if they upgrade their track and field stadium, it could be perfect. We’d be happy to pay rent there and help them. The location is great. It could be a win-win for sure.”

The Business of Soccer

For a team to stay alive, profits need to be made. Even though the 1904fc founders are passionate about youth development first, Gontran was quick to point out the real need for revenue. I asked how the club is planning to make a profit and grow. “It’s a game, but it’s also a business, you’re right. We have to bring in revenue. Most clubs have HALF of their revenue coming from TV rights. All of the big clubs here and in Europe — that’s where they make the most of their money. Half of their revenue is from TV rights. We don’t have that here at 1904fc. Maybe one day we will. That would be great.”

“But we are aiming for a different revenue source: transfer fees. This goes right in line with our club philosophy of development and opportunity. We want to give opportunity to great players who haven’t gotten the chance they deserve yet. We can help develop them and get them in front of clubs that can give them even greater opportunities. Then we can transfer them to a bigger club, and we will use the transfer fees to invest that right back into 1904fc here in San Diego. That’s the goal.”

Gontran knows the business of soccer. In addition to coaching and managing players, he also spent years in France as a player agent for pros in Europe. Gontran is perfectly poised to help 1904fc players take advantage of the opportunities in front of them.

I asked Gontran how he would describe 1904fc’s culture and playing style. “It’s very simple,” he said. “It’s two things. Game. Understanding. Game understanding. It’s a game. This is most important. Soccer is a game. You play soccer. You don’t WORK soccer. It is meant to be enjoyed. It’s also not a war. Not a battle. It’s a game. You have rules and an opponent. You have to find a way to score. Game strategy. It’s not a fight. You don’t have to be stronger. Or faster. It’s about strategy. You mentioned you and your son like Lampard [he’s right, I did]. He’s not the fastest. He’s strong, but he wasn’t the strongest. But he understood the game. And strategy. He also loved playing the game. Pep’s [Pep Guardiola] teams. They’re not the biggest and fastest. But they understand the game. That is what we want to implement here in America with our players. Game understanding.”

He answered, “We are very excited about US Open Cup. We are in the second round. In March is the first round. We will play the winner of Albion [ASC San Diego] and Chula Vista FC. That game will be in April at our home field [Lincoln High School].”

“Our NISA Spring season will be very exciting, too,” Gontran continued. “We will have a lot of home games starting in March. I hope that we can get Demba out here for the first home game. His schedule is so busy, but we are going to try.”

Gontran explained, “Demba is passionate about youth development. Very passionate. He wants to be here to talk to the kids here. We will also be holding youth clinics with clubs here in the region. Any youth club that wants to host a clinic with us and our players, that’s great. We’ve had a few already. If there are any clubs out there that want to do a clinic with us, all they have to do is reach out. We are all about the kids and youth development.”

Finally, thank you, 1904fc. We appreciate your taking the time to talk to us about the team and the club’s future.

all photos by Carey Schumacher (@CS9Sports)