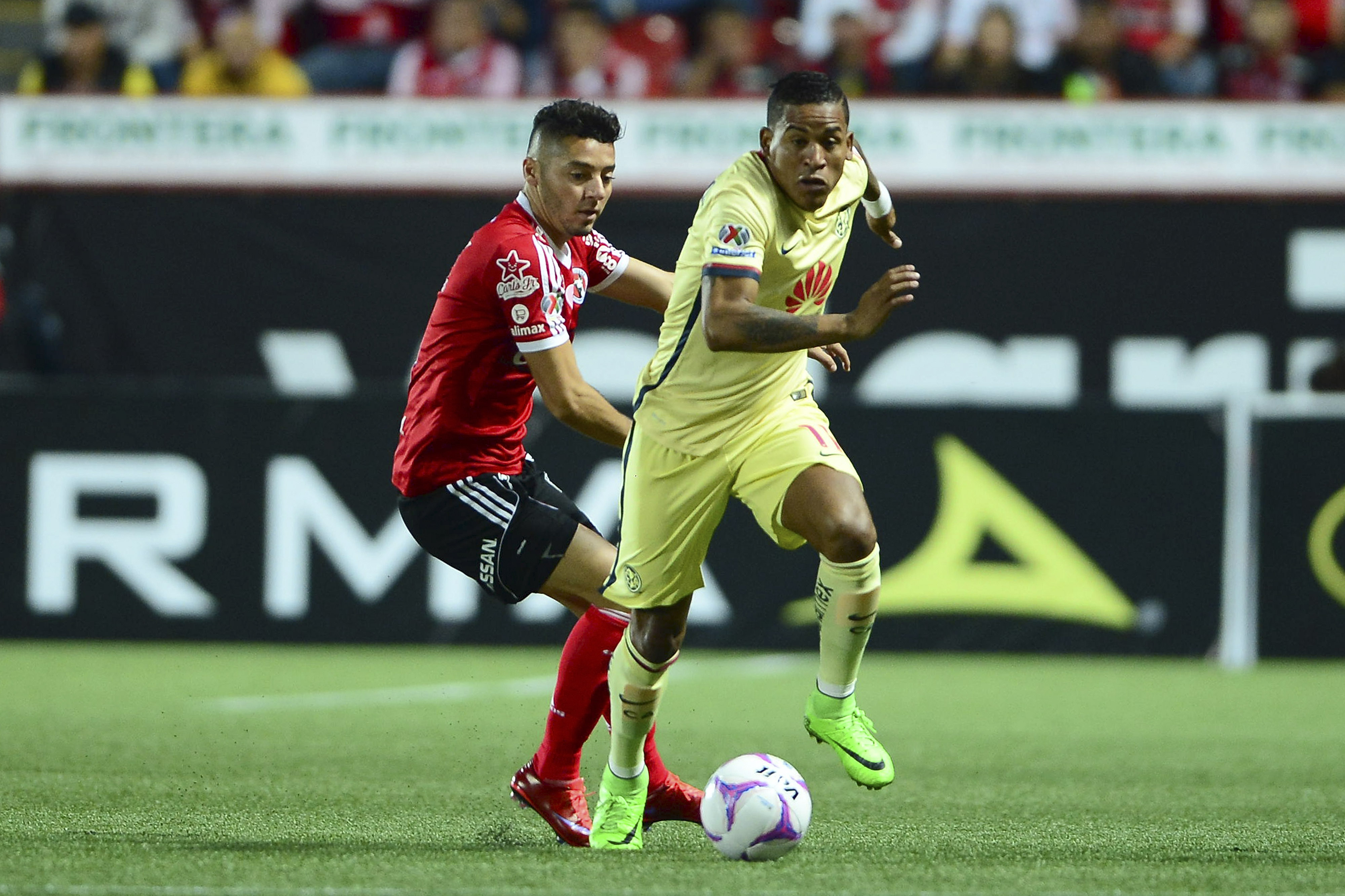 Club América jumped out to an early lead and added a second goal in the first half to take three points from its Friday visit to Tijuana.

Tijuana never looked like winning the contest, and the 2-0 victory takes Club América to the second spot in Liga MX, while Xolos’ hopes of making the postseason grown increasingly slim.

Michael Arroyo opened the scoring in the 15th minute with a stunning goal, cutting inside on his right foot from around 30 yards out and sending a quick shot curling past Tijuana goalkeeper Federico Vilar. Perhaps a Xolos defender should’ve applied more pressure to Arroyo, but the Ecuadoran midfielder’s goal is the early contender for Liga MX goal of the week.

Moisés Muñoz got his first real test of the match in the 26th minute when José Madueña hit a bouncing ball that came to him atop the box first-time and kept it on target. The Club América goalkeeper passed the test and kept Xolos off the board.

In the 35th minute, it was two. América charged at the left side of the Tijuana defense and found a vulnerability. Carlos Quintero won a pass over the top and moved the ball to his right to Andrés “Rifle” Andrade coming forward. He got it back and set up Oribe Peralta for the tap-in, his seventh goal of the Apertura.

That goal motivated Xolos manager Rubén Omar Romano to take off American international Michael Orozco and bring on Gabriel Hauche, moving from a five-man back line to four at the back.

Andrade found himself in the referee’s book just before the break for coming down on a midfielder’s ankle, but the whistles and jeers from the crowd were mostly directed at Xolos as they left the field.

Things didn’t open up too much in the second half after the tactical switch, but Tijuana forward Dayro Moreno tried to pull one back in the 57th minute, hitting a volley from a looping pass over the América. Moreno only could win a corner kick.

Tijuana was fortunate not to be down another goal in the 76th minute when Quintero put the ball in the back of the net, but the goal was called back because of an offside decision, a decision that appeared questionable on second viewing.

Aside from that and a few other calls, it wasn’t Tijuana’s night. Vilar was first called into action in the 10th minute when ex-Tijuana forward Dario Benedetto made a run off his defender’s bask shoulder and received the ball in space. The recently naturalized Mexican had support but didn’t realize and sent an effort into the legs of the Xolos shot-stopper.

Benedetto didn’t get another chance, leaving the match with an injury in the 23rd minute and being replaced by Quintero.

Tijuana returns to action Wednesday, traveling to Guadalajara to face Atlas in a Copa MX quarterfinal.