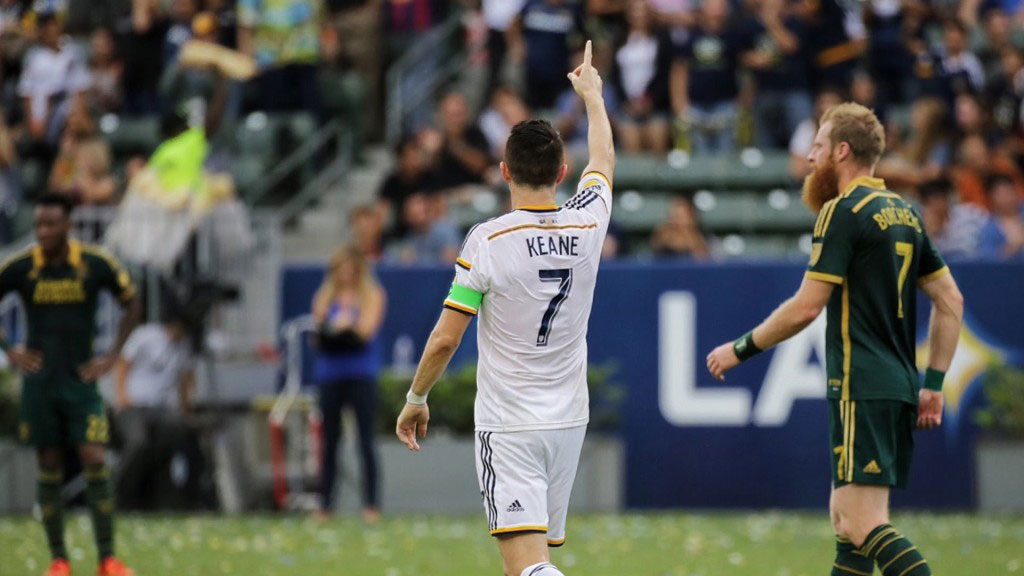 The Portland Timbers took a huge step toward a postseason berth Sunday afternoon as they rallied from a first-half deficit with three goals in barely more than 10 minutes, then held on to hand the LA Galaxy just their second loss this season at StubHub Center.

Fanendo Adi scored two goals three minutes apart, Diego Chara added a header seven minutes later, and Darlington Nagbe and Maximilano Urruti added late strikes for a stunning 5-2 triumph that vaulted the Timbers (14-11-8) from seventh to fourth place in the Western Conference with one week to go in the regular season.

Robbie Keane scored twice for the Galaxy (14-10-9), his 18th and 19th goals of the campaign, first providing a 36th-minute lead on a superb volley, then trimming LA’s deficit to a goal with a glancing header in the 84th minute. Hawthorne native and USMNT member Gyasi Zardes was unusually quiet throughout the 90 minutes he played.

The Galaxy, who were eliminated from the Western Conference and Supporters’ Shield title races with FC Dallas’ win Saturday, likely will need a victory next Sunday at Sporting Kansas City to secure second place and avoid a wild-card game to open the postseason. They are a point ahead of Vancouver and Portland, and three ahead of Seattle and Sporting; any of the four could overtake them.

Sporting has two games remaining, with a game at home Wednesday against Colorado.

Adi’s goals were his fourth and fifth in the last three games, and gave him 15 for the season. He scored four in three meetings with LA this year.

Both sides made changes at right back, with Dan Gargan getting the start over A.J. DeLaGarza for LA and Taylor Peay stepping in for suspended Alvaro Powell for the Timbers.

The Galaxy nearly went ahead in the fourth minute, when Steven Gerrard curled a free kick off the upper reaches of the left post. They came close again in the 18th, when Timbers goalkeeper Adam Kwarasey parried a Leonardo header from a Giovani Dos Santos corner kick off the crossbar.

LA built several more fine attacking sequences, but Chara was expert at defusing dangerous situations just above Portland’s box. His biggest takeaways against Keane in the opening minutes and again in the 17th and 53rd minutes.

Keane netted his 18th goal this season, third-best in MLS, in the 36th minute.

Juninho, about eight yards behind the midfield line, chipped a ball over the Timbers’ backline. Keane split Liam Ridgewell and Nat Borchers with his run, let the ball bounce once, then volleyed from the edge of the area inside the left post.

Ridgewell had Portland’s best chance to score before the break, after Donovan Ricketts misplayed a tame cross then deflected Chara’s shot for a corner kick. Ridgewell nodded a Diego Valeri cross over the top-left corner of the net on a bounce.

The Timbers put heavy pressure on LA to start the second half, and Ridgewell twice came within inches from scoring the equalizer. He volleyed a cross from Rodney Wallace over the ball following a corner in the 49th minute, then headed Valeri’s near-post serve on another corner off the crossbar in the 50th.

LA nearly gifted them another opportunity, but Ricketts was able to clear a poor back pass from Omar Gonzalez before Lucas Melano got to the ball.

Adi scored the equalizer in the 65th minute. Valeri fed Melano on the left just inside LA’s penaly area following a sprint from midfield, then Melano played it to the middle for Adi who turned with minimal opposition — Gonzalez was caught upfield on Valeri’s run — and fired into the ceiling of the net.

Gargan took down Adi two minutes later as a ball from Melano arrived in the middle of the box, and referee Alan Kelly pointed to the spot. Adi fired underneath the diving Ricketts to put the Timbers ahead.

Robbie Rogers came close for L.A. five minutes later, but Kwarasey leapt to snare the shot at the right post.

Chara scored the third two minutes later, racing toward the goalmouth to head home a Wallace chip following a nifty sequence in and around LA’s box.

The Galaxy pushed forward, and Keane made it 3-2 off a Jose Villarreal chip when his glancing header from about 8 yards cleared Edson Buddle and found the netting inside the left post.

Nagbe’s goal moments later appeared to settle things, and when Urruti struck five minutes later, there were no doubts.