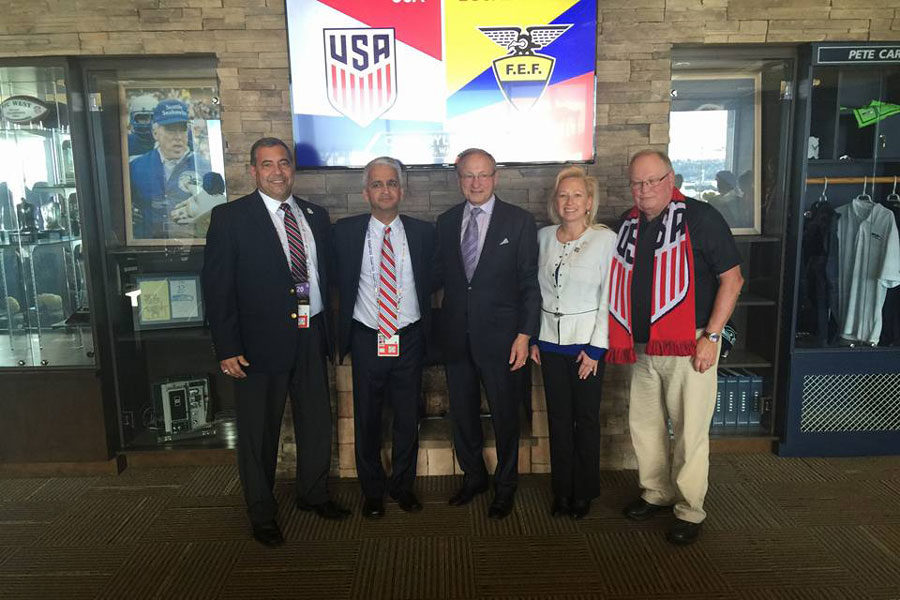 SoccerNation’s Carrie Taylor recently had a 1v1 sit down with soccer pioneer, long time advocate and administrator Shonna Schroedl. Schroedl is running for a Board of Directors seat with US Soccer in the upcoming March election. The conversation touches on the youth and stark collegiate playing career of the Oregon native, the transition into her career into the realms of the US Adult Soccer Association, gender equity, concussion protocol, development of young players and ultimately the impetus to run for a Board of Directors seat with the United States Soccer Federation.

Carrie Taylor: What is your soccer playing background?

Shonna SchroedI: I began playing youth soccer when I was 13 years old.  Soccer was relatively new at that time in Oregon.  I played high school and then at University of Oregon.  My freshman year at Oregon, our team qualified for the first collegiate national championships for women.  The championships were a long weekend tournament with 12 teams.  We played 3 games over 3 days.  The event was held at University of North Carolina.

After college, I continued to play on a competitive women’s club team. I played in National Cups for Open and Over 30.  My Over 30 team also played in the World Masters Games.  I have continued to play Over 40 and Over 50 nationals at the USASA Veterans Cup.  My league team at home has 6 players that I have played with since I was 16 years old.

Carrie Taylor: What was it like being a pioneer in the college game?

Shonna Schroedl: In 1981 our team was thrilled to be participating in the first collegiate national championships.  We had to raise money to pay for our flights to North Carolina, because the school said it wasn’t in the budget.  Our team had to take out a loan from a local bank in Eugene, for $40,000.  The team members had to sign and be responsible for the loan.  We spent the rest of that school year doing fundraisers to pay back the money.  We arrived in North Carolina with one set of uniforms, newly donated Nike sweats and bags. We paid for our own personal equipment.

Other teams thought we were well funded, little did they know we were scraping by.  We were still thrilled to just be there.  The experience was amazing and we felt so honored to be a part of the event.  Since this was prior to any US Women’s National Team being formed, we all knew that this was the opportunity to shine on a big stage.  Even though our team finished 6th nationally, University of Oregon still cut our program back and diminished our funding.  We continued to work hard and play for the love of the game.

During the rest of my college career, we traveled in vans up and down the West Coast, for our competition.  I am still very proud to have been a part of the first college championships for women.  It is great to see how college soccer for women has grown and enabled more and more women to have opportunities.

Carrie Taylor: What was your experience with the Women’s World Cup like?

Shonna Schroedl:  I worked for Women’s World Cup in 1999 and 2003.  For 1999 we had 2 years leading up to the event, to prepare.  I was the Venue Coordinator in Portland.  I was responsible for taking care of visiting teams, VIPs and the VIP venues.  In 1999 we had 8 teams come through Portland.

The most challenging was North Korea.  They were housed in the same hotel as other teams, had the same training facilities, the same transportation – yet they believed they were being mistreated.  Their administration spent 8 straight hours one day in the FIFA match commissioner’s office, which was next door to my office at the FIFA hotel.  It was very political and frustrating for everyone.   All of the matches went off without any issues and it was an incredible experience.  Our Portland team recruited and managed about 300 volunteers.

For the final week, I worked out of Protocol office in Los Angeles.  I met so many great people from around the world.  FIFA hosted a Congress that focused on women’s development.  It was inspiring to see female soccer leaders from countries where they were literally putting their lives at risk to play.  In 2003 we had 4 months to prepare for the event, after it was moved from China due to bird flu.  In Portland, we had many of the same staff and volunteers that were in place for 1999.  I managed Protocol, so my job was to take care of the VIPs.  Portland hosted the semi-final game between Germany and USA.  It was not a good night for USA that time, so the feeling was much different, then the exuberance from 1999.  Still, it was an excellent experience and it all felt pretty easy because we had managed the same event 4 years earlier.

Carrie Taylor: Tell me more about the USASA and your involvements on their board.

Shonna Schroedl:  US Adult Soccer Association is the largest organization for adult amateur soccer play, in the US.  We currently have about 260,000 members across the country, including novice recreational players and very high level competitive players – men and women.  Some players will go on to play professionally, or maybe have previously been professional.  We believe that soccer is a game for an entire life span.  We offer many types of programs including co-ed, 7 v 7, walking soccer, national championships, beach soccer, futsal and indoor.

I have been an officer for USASA, since 2010.  I currently hold the position of Board Secretary.  The Board has 4 officer positions, 4 Regional Directors, 4 Deputy Directors (non-voting) and 2 At-Large Directors.    I am also one of 8 Adult Commissioners, for the USSF Adult Council. 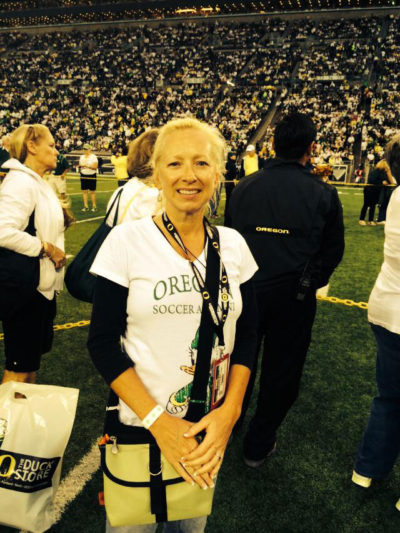 Carrie Taylor: What committees have you been involved with previously?

Shonna Schroedl: Over the past 2 decades I have served on numerous committees.  I have been on the Select Teams Committee, Midyear Meeting Committee, Budget Committee, Chair of Women’s Development Committee.  I have had the pleasure to work with so many great volunteers over the years, and learn about what happens in every corner of our country – in the soccer world.  I have also served on the USSF Diversity Committee and the USSF Disability Committee.

Carrie Taylor: What made you want to run for the US Soccer Board of Directors?

Shonna Schroedl:  Over the past several years, it became very apparent to me I had as much or more experience, knowledge and most importantly ability as many of the gentlemen stepping up to run for positions.  I have years of playing at competitive and recreational levels – so I understand the needs and wants of both of those groups. I have managed teams, leagues and tournaments. I have put in time and gained experience on a variety of committees and learned how the organization works, and why some times it does not work well.  I have worked for Women’s World Cup, a professional team, and volunteered endless hours for amateur soccer.  I have been a youth and high school coach and even a referee for a year.

I believe I understand the global and national picture of the state of soccer.  I also know that I work well in finding consensus agreements and am open to hearing the opinions of others.  I know that I can be a valuable member of the US Soccer Board of Directors and bring a perspective that may be missing or has not been strong enough.  US Soccer has been a front runner in pushing forward women to play, and now we need to show we are ready to have more women as leaders in the administration of soccer.

Carrie Taylor: What types of issues are important to you and what do you hope to bring forward into the US Soccer Board?

Shonna Schroedl: There are so many issues that I believe will continue to be a challenge for all of us.  Some of these include gender equity; concussion protocol; development of young players; serving those who cannot afford high level clubs; inclusion of physically challenged athletes; continuing to market soccer as a pre-eminent sport in the US.  I believe that US Soccer benefits when more voices are brought to the table.

Carrie Taylor: How does one get elected to the US Soccer BOD?

Shonna Schroedl:  The US Soccer BOD currently has officer positions – President and Executive VP; representatives from the Athletes Council, Pro Council, Youth council and Adult council; and then Independent Directors.  Independent Directors are individuals who come from outside of the soccer world and are sought after because of their expertise in a particular area.  I am running as one of two representatives from the Adult Council.  The Adult Council delegates will be voting on the position that I am running for.  Any delegate can decide to run for a position.  I have spent several decades attending meetings, knowing and understanding the organization, working as a volunteer on committees and being successful on those committees – in order to gain the respect and support of the national council.

Carrie Taylor: What is your wish for the state of soccer moving forward?

Shonna Schroedl:  I would like to see the different councils – Youth, Pro and Adults work a bit better together to promote and enhance soccer in the US.  We are all part of a big family.  There are so many in youth soccer that believe that playing days are over at age 19, if they do not move on the college or pros.  We truly are the game for life and would all benefit from promoting that concept.  That includes being supporters and fans of our national teams, our men’s and women’s pro and elite leagues, and continuing to play.  I am also interested in seeing our referee program grow and flourish.

Carrie Taylor: How can someone get in contact with you?

Shonna Schroedl:  I am available via email at shonna@kikaua.com or if someone would like to speak, please send me a note and I will pass on my phone number.