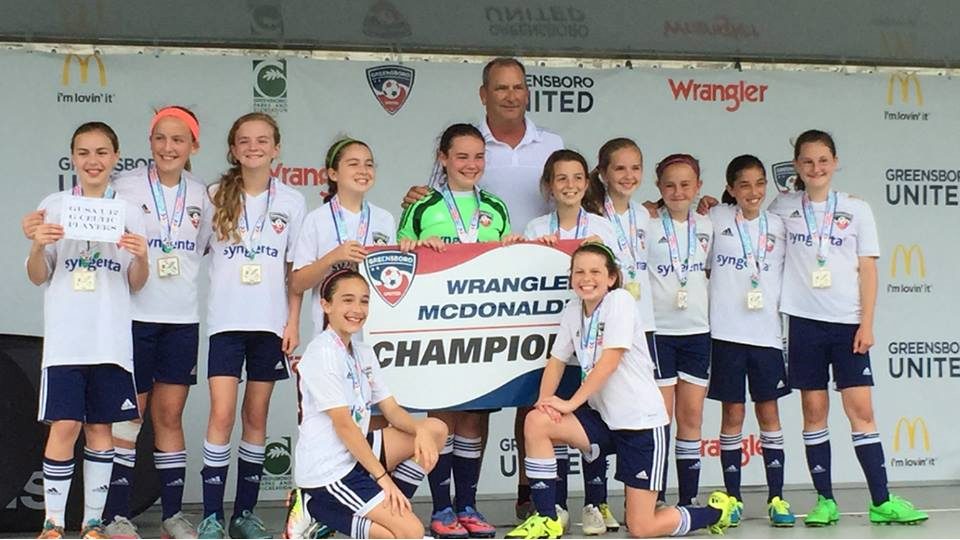 Why I Love Coaching Girls

Do you prefer coaching girls? I’m asked that question quite a bit. And for me, the answer is yes.

Girls, I tell people, will listen to you and try to do what you ask. With boys, on the other hand, you first have to convince them that you know what you are talking about and what you are saying is correct. Then, they will do it the way they want, anyway.

But that’s just one reason I enjoy coaching girls soccer, and there are many. Of course, working with young female athletes has its difficult moments and significant challenges, but that’s because coaching – anyone or any sport — is hard.

Please don’t mistake this as an advice column, or a How To article. Don’t mistake me for an expert on coaching, or some sort of guru who has all the answers about unlocking potential of female athletes. I simply want to tell you what it’s like – or what it can be like – for a man to work with a group of girls for a 10-month period in youth soccer. It can be extremely frustrating, a whole lot of fun and amazingly rewarding, hopefully this article will encourage more pe coaching companies to start working with young girls!

My ‘89s taught me a lot, the most important lesson being to remember not to take anything too seriously. I learned what they wanted from me – make them better, help them win and make it fun. I also learned that they understand the game pretty well but look at it in an entirely different way than I did as a male athlete. Here’s the conversation one day at halftime:

“You know that girl with the high pony-tail who looks like she’s been in the tanning bed too long?” says Lindsay, and the whole team immediately knows who she is talking about. “We can get behind her easily. We should play to her side more.”

“What number is she?” I ask as the girls look at me like I haven’t even been watching the game. No one knew her number, just the position of her pony tail and state of her tan.

I slowly learned that communicating with girls was going to be a bit different. I also learned that the timing of my communication was very important. Excessive praise or criticism had to be done privately.

Yelling something positive from the bench is acceptable as long as it wasn’t to the point that separated them in the minds of their teammates. Public criticism is a bit different, though. I found that if I yell from the sidelines something like, “Anna, that was awful! Can you at least try?” Here’s what’s going on in Anna’s mind: “Oh, my God, he’s yelling at me in front of everyone! What a jerk. Why doesn’t he just shut up.”

So that doesn’t work. Why yell anything to an individual? When I need to praise or criticize a player, I do it in private. I make it a point to pull them aside and tell them what they just did was outstanding, or that it’s the best I’ve seen them play in a long time. Or I review a play and suggest things they could have done instead.

I should point out that what I’ve described above is not, or course, the case with every player, but as a coach I have to know which ones can handle being called out in public without shutting down. They are the ones who will take criticism and show up early to practice to work on it.

The last thing I want to be is like all their other coaches. First of all, I’m not. I’m not in my 20s or early 30s (or 40s, for that matter). I am, I like to tell my players, old enough to be their older cousin. Because of my age, I’m able to have a unique relationship with them.

I learned early in my coaching career that you have to coach from your own personality. You can’t adopt one you think will be effective. And my personality is built around sarcasm, humor and teaching life lessons through exaggeration. The more outrageous the statement, the more likely kids are to remember it, I figure.

Here’s an example, when coaching directors from our club were watching our training session one day, the players were going through an exercise when I noticed some of them were cheating a little, not putting in enough effort, and taking shortcuts, so I told the group, “Don’t cheat. You know what comes next for someone who cheats?” And without breaking stride, the group responded in unison, “Heroin.” Then, Rachel added that cutting corners was a gateway drug.

The coaching directors were stunned, but I was never prouder. Do they really think that if they cut a corner, they will be doomed to a life of drug addiction? Of course not. But I made a point that they will remember. Those who need reminders are told “it’s okay, rehab facilities are pretty nice these days,” or “We will visit you in the detox center.”

Early on, I noticed that the girls I was coaching, with a few exceptions, weren’t all that anxious to go into a hard, physical challenge, and that’s one of the few things I insist on. The players are not allowed to duck out of a challenge.

Over time, they start fighting for the ball harder and realize it doesn’t really hurt to get kicked. But if they happened to get a yellow card for what the referee perceived as an overly reckless or overly aggressive tackle, they were sometimes devastated, like they had been sent to the principal’s office.

So I started making fun of them. I would assure them that we would visit them in the juvenile detention center, and tell them that the yellow card will go on their permanent record and there’s no way they will be able to get into college. I thought it sounded better than, “It’s not the end of the world.” There’s a fine line between letting girls know it’s perfectly okay to foul someone but not purposely.

And the girls know they have a free reign to dish it out to me, as well. They make fun of the “old man noise” I make when standing up. They can giggle when pointing out my lack of hair, and a year ago McKenzie started a personal campaign to get me to dress more “snazzy.”

Twenty-two years ago, I was incredibly fortunate to co-author a book with Anson Dorrance, the head coach of the University of North Carolina women’s soccer team. Dorrance and made a wildly successful career of understanding female athletes. Two things I leaned from Anson have proven over and over to be true.

First, “women have a superior understand that relationships are ultimately most important.” And, in a coach “girls don’t care how much you know until they know how much you care.”

As for relationships, it’s very obvious to me that the main reason my players show up a practice smiling is that they get to see their friends. I try to give them as much time as I can for them to goof around, laugh and talk among themselves before I tell them it’s time to get down to business. And I have to make sure that business is fun, inclusive and entertaining.

But I also have to be aware that there’s a lot of truth to the old saying that, “there are few things on earth that can be as mean as a middle school girl.” We talk about how we treat each other and our main core value is “Don’t be a jerk.”

The “knowing you care part” is easy for me because I do. It’s easy because all it requires is listening and paying attention. I also understand that girls don’t always want you to solve their problems; they want you to listen to them. Full disclosure: I learned that one from my wife and was trained extensively by my daughter, a remarkably intelligent and independent 25-year-old.

All the girls I coach have stories they want to tell me, or a joke they heard, or tell me about the latest 100 they got on a test, or show me some art work they did. I listen and remember. I know what other sports they play, what instruments they play, if they have brothers or sisters and how they get along with them. I listen to their parents so I know if there are issues that I can help me help them.

The rewards are incredible. There is nothing more satisfying that seeing a young girl who struggles with confidence, have some success. Or the look on their faces when I meet with them one on one and talk about how much they have improved or challenge them to get better at something specific.

Every once in a while, there’s a great debate among coaches. It can last a while because coaches often overthink things. But when it comes to the question “Define success as a coach,” the answer to me is easy: Everyone gets better, everyone has fun, and everyone comes back next year.”

Wins are important, and the competitive side of me needs them, but a U12 team asked me flat-out one day, “Why are you so grumpy when we lose?” I had to think about that one for a while. But winning means players are improving. Everyone has fun when we win and players who are on a winning team are more likely to come back next year.

Winning is a small part of the overall satisfaction I get from coaching girls. Seeing evidence of my efforts to help them pay off is what really matters.