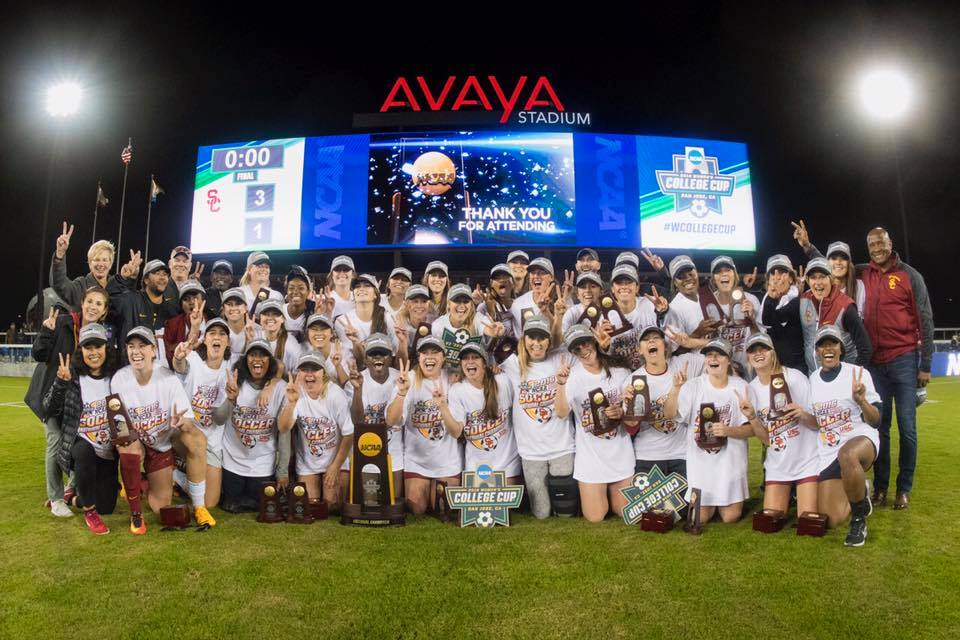 With the victory, USC is now the first Pac-12 program to have won two NCAA women’s soccer titles. The program brought home its first national title in 2006.

In the championship match, USC wasted no time in putting the pressure on West Virginia as the Trojans scored in the second minute of the match. A corner was headed out of the box by West Virginia. USC’s Savannah Levin, on top of the box, headed the ball back into traffic just in front of the West Virginia goal. Morgan Andrews found herself unmarked and redirected the ball with a header into the far post for her 10th goal of the season and the 1-0 lead.

USC wasn’t able to coast as West Virginia pounded the USC goal with a heavy onslaught of shots. USC goalkeeper Sammy Jo Prudhomme was up to the task as she made four crucial saves to keep West Virginia scoreless heading into the half.

West Virginia continued their pace in the second half and a shot from the edge of the box from Ashley Lawrence was finally enough to beat Prudhomme in the 65th minute.

The match opened up after this with massive spaces in the midfield. Less than 10 minutes later USC bounced back and scored what would be the game-winning goal. Leah Pruitt beat a defender on the outside and dribbled inside. A West Virginia player ran over to assist in defending, which left Katie Johnson wide open inside the box for an easy square ball. Johnson took one touch and curled a low shot past the goalkeeper.

Johnson added a second goal and put the match on ice with a brilliant goal in the 86th minute. The West Virginia backline was unorganized and Johnson ran through and collected a through ball unmarked and blasted a shot from outside the 18 and over the goalkeepers head for her second goal.

The win gave USC 19 on the season which is the second most in program history.