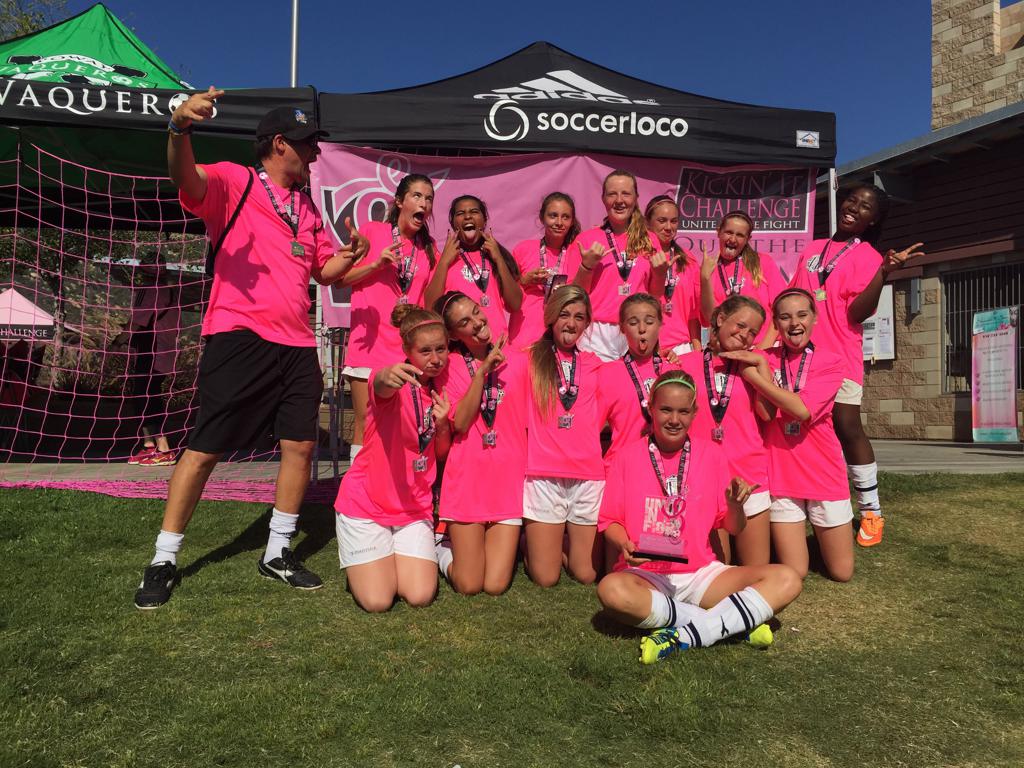 Unite in the Fight: Kickin’ it Challenge Continues Efforts with Breast Cancer Awareness

Everyone knows someone who has been affected by breast cancer. In San Diego alone, six women, on average, are diagnosed with breast cancer every single day.

In 2012, when a Poway Youth Soccer player lost her mother to the all too common disease, members of the Poway and surrounding soccer communities rallied together to form a weekend tournament called the “Kickin’ it Challenge”. The Poway President and current Tournament Organizer Pam Bickel was at the forefront of the movement, with soccerloco being on board as a sponsor since day 1.

Here in the late Spring of 2017, the 6th annual Kickin’ it Challenge will be taking place this weekend, Saturday June 17th and Sunday the 18th, at Ryan Park in Escondido.

Our own Nate Abaurrea caught up with Bickel this week, as the tournament approaches and emotions are already running high. In the conversation, we learn more about the inspirational roots of the tournament, its significance in the local community, and the hopes of its message spreading far beyond the borders of San Diego County.

Nate Abaurrea (SoccerNation): Pam, thanks so much for joining us. I know this is quite the busy time for you. First off, just tell us what this tournament means to you, and why it’s so important for people in our community to know all about it?

Pam Bickel (Kickin’ it Challenge): Thanks for having me. It’s quite the busy time indeed.

This tournament exists to support breast cancer victims and those affected by breast cancer. It’s an alarming stat that 1 in 8 women will likely be diagnosed with some form of breast cancer in their lives.

We started in 2012 when the Poway Soccer Club lost a mom to breast cancer, and the tournament has been something we do every year ever since.

There is a girl currently playing for San Marcos United who lost her mother this year, and she is a big focus of what we’re doing this time around.

All the money that we raise goes to breast cancer research, but it’s also so much about just raising awareness. Every year at the tournament we do a challenge called “Power of Pink” where teams deck themselves out in all pink. We see everything from pink tutus and southern hats to elaborate pink pirate costumes. It creates a good energy, and is all part of the awareness aspect for which we are striving.

Nate Abaurrea (SoccerNation): I’m curious to hear you expand on the awareness aspect, especially with young kids who may be learning about this very serious issue for the first time.

Pam Bickel (Kickin’ it Challenge): It’s so important to us. We need to be giving kids that awareness and also be showing ample support to kids who have had to learn about breast cancer so quickly, as they may be going through the pain and angst of having a mother or family member diagnosed. This tournament gives these kids opportunities to become involved with the fight against breast cancer.

Peoples names are written on jerseys and on kids arms. Some kids do temporary tattoos. We have a dedication wall, where people can write messages and sign their own names. This is about celebrating the life of someone who was lost while simultaneously helping to give courage to someone in the midst of their battle with the disease.

Our kids play soccer every weekend, and most days during the week as well. On this coming weekend, they get to play for a bigger cause. The kids themselves get to give back to the community. We all get to “Unite in the Fight”.

Nate Abaurrea (SoccerNation): What has stood out for you in regards to the support you’ve received since this tournament started?

Pam Bickel (Kickin’ it Challenge): The support has been incredible from so many different sources.

I remember when we first started it, some people commented that this would likely only be a girl’s tournament, because it was in line with breast cancer research and young girls becoming young women. But that simply hasn’t been the case at all. The boys’ teams are all about it, just as much as anybody.

So many of these women who have passed away as a result of breast cancer are mothers to young boys. Those young boys have been greatly affected by this disease, and they need support. This is not just a women’s issue. There have been millions of men who have been impacted, and there will sadly be many more. Is it to the same level that the women themselves are affected? No. It’s different. But my god, anyone who thinks this is just a women’s issue is simply wrong.

I also remember back when we were first conceptualizing this whole thing, and I spoke to John Lococo at soccerloco. I basically called John and said “please tell us why this is crazy and why we shouldn’t do this”. John said it’s not crazy at all, and proceeded to give us a sponsorship. John and soccerloco have sponsored us from day one, and we’re now six years running. We’ve raised almost $200,000 in that time, and we are excited to break that 200k mark this year.

Another unique concept with the tournament is that it’s partnered with a silent auction. And one of the more unique brands of support we’ve received is from all these other soccer clubs from around San Diego, many of whom donate entrances into their tournament to be utilized in the auction. This just keeps a state of connectivity in our soccer community, and makes sure that every club can be a part of this event.

We play the tournament at Ryan Park, which is a fabulous venue. But space is not exactly infinite, and we have to focus on staying within our means. We do everything we can to make this thing enjoyable and memorable. We have pink lines on the field, pink corner flags… We have awesome pins that are donated. We have 1st and 2nd place trophies and medals. We want everybody to truly be involved.

This tournament just has a special feeling. The kids are playing for a bigger cause. It’s still good soccer. People still want to win and beat their opposition like any other day. But people have overwhelmingly just said that this tournament is cool. It’s unique. Everyone involved has fun.

Nate Abaurrea (SoccerNation): Another word that goes with awareness is education. Talk about the educational powers of an event like this, particularly with young girls and boys.

Pam Bickel (Kickin’ it Challenge): This is so true. Education is vital, and we have a great opportunity to educate our young people, especially our young women, on some details of breast cancer, what to look for, what to be aware of, and what to do.

The simple awareness aspect is so much about letting everyone know that there might be a woman who has been diagnosed with breast cancer who totally has enough money to pay for her treatment, but she might just need a hug. Breast cancer isn’t contagious. Go give that woman a hug!

Again, the awareness is just as important as the fundraising. It all plays a role.

Nate Abaurrea (SoccerNation): Without losing sight of the immediacy of this weekend, where do you hope to see this event go in the coming years?

Pam Bickel (Kickin’ it Challenge): This tournament has become a support base for people affected by breast cancer in our community. But we also have a great partnership with a club in North Carolina. I was in an airport in North Carolina not too long ago. Some man I’d never seen or talked to before was looking at me. He then walked up and commented on my Kickin’ it Challenge shirt and just said “thank you”.  That moment stuck with me. It’s about the support and being there for people, helping people truly feel that support.

What we want is for someone to read this article or hear about what we are doing and then do something similar where they live. The dream is for this model to expand well outside of San Diego. It doesn’t matter where you are in this world. Everyone knows someone who has been affected by breast cancer. We can all help one another.

Nate Abaurrea (SoccerNation): Pam, thank you so much for discussing this beautiful event with us. Cheers to you and cheers to everyone involved with the Kickin’ it Challenge.

Pam Bickel (Kickin’ it Challenge): Thanks Nate, and a huge thanks to soccerloco and SoccerNation!

(Online donations to the tournament can be made by going to KickinItChallenge.com, and hitting the donate button. soccerloco and SoccerNation is proud to sponsor the 6th annual Kickin’ it Challenge, taking place this Saturday and Sunday, 6/17 & 6/18, at Ryan Park in Escondido.)