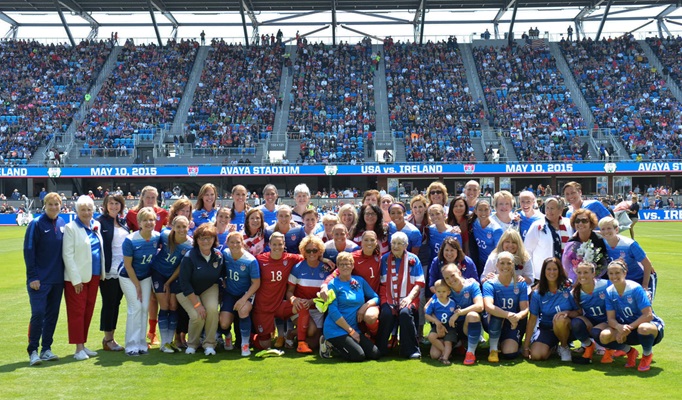 As the Women’s World Cup is approaching, the U.S. Women’s National Team is preparing for an expected deep run in Canada this summer. The USWNT faced off against the Republic of Ireland in the first of two tune up matches this past Sunday, and won 3-0 at Avaya Stadium in San Jose.

Although victorious by a convincing margin, it should be noted that the U.S. still needs to address a major area on the offensive end. Although the USWNT dominated possession and shots on goal, the lack of finishing is a concern. The United States scored on two set pieces with another goal scored by Abby Wambach off a cross from Carli Lloyd. Although starting striker Alex Morgan did not play due to a bone bruise in her left knee, this concern continues to be an issue for the American side.

The USWNT will be expecting teams to sit back and ‘park the bus’ this summer, particularly if the Americans fall behind towards the end of a match. Ireland tried to do this from the beginning of the game on Sunday, only for the US to create chance after chance.

“I think some of the teams are going to sit back on us like they and kind of pack it in so we’ve got to be able to break that down and I think that we were able to get wide quite a bit today and our set pieces were good,” stated U.S. midfielder Megan Rapinoe.

With the ability to create chances not an area of issue, the question remains who will provide the U.S. with that finishing touch to bring the World Cup back to the United States. The USWNT will look to address this issue in friendly matches leading up to its first match in Canada on June 8th against Australia and hopefully will put this concern to rest.

The next match for the Women’s National Team is this Sunday against Mexico at the Stubhub Center in Los Angeles. Kickoff is at 6:00 Pm PST and will be broadcast on Fox Sports 1.