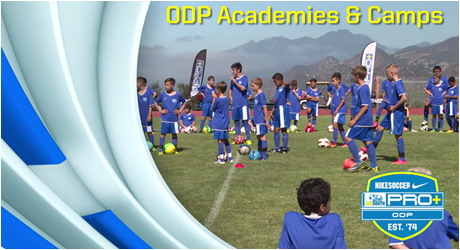 Registration for the Cal South Pro+ ODP Camps and Youth Residential Academies is now open with camps kicking off the middle of June.

Entering the 17th year of operation, Cal South Pro+ ODP Soccer Camps target individuals ages 7 to 14. These camps are designed to provide players with the opportunity to reach their highest level of play in competition with players of the same age group. The camps last three hours per day, with the emphasis of development being on making good decisions while under pressure. The camps open in Moorpark on June 15th and close in Torrance on August 7th. A list of the available ODP Day Camps is provided below with the dates and locations included.

The Youth Residential Academies are located at the Thacher School in Ojai Valley, with the camps being a four-day event. These youth camps are aimed at individuals U10-U14, while the Finishing and Goalkeeping Academy are open to ages U14-U17. The training schedule for these camps are modeled after the U.S. Youth National teams, which focus on technical individual and small group training as well as team play.

The coaching staff of these camps include those with USSF ‘A’ & ‘B’ credentials, along with English Premier League and UEFA licensed coaches. With the programs emphasizing proper camp philosophy, quality coaching staff and a progressive curriculum, players will be provided the necessary tools to improve their game and make the next step of progression in their development.

For link to the registration page see http://www.odpcamps.com/online-registration/