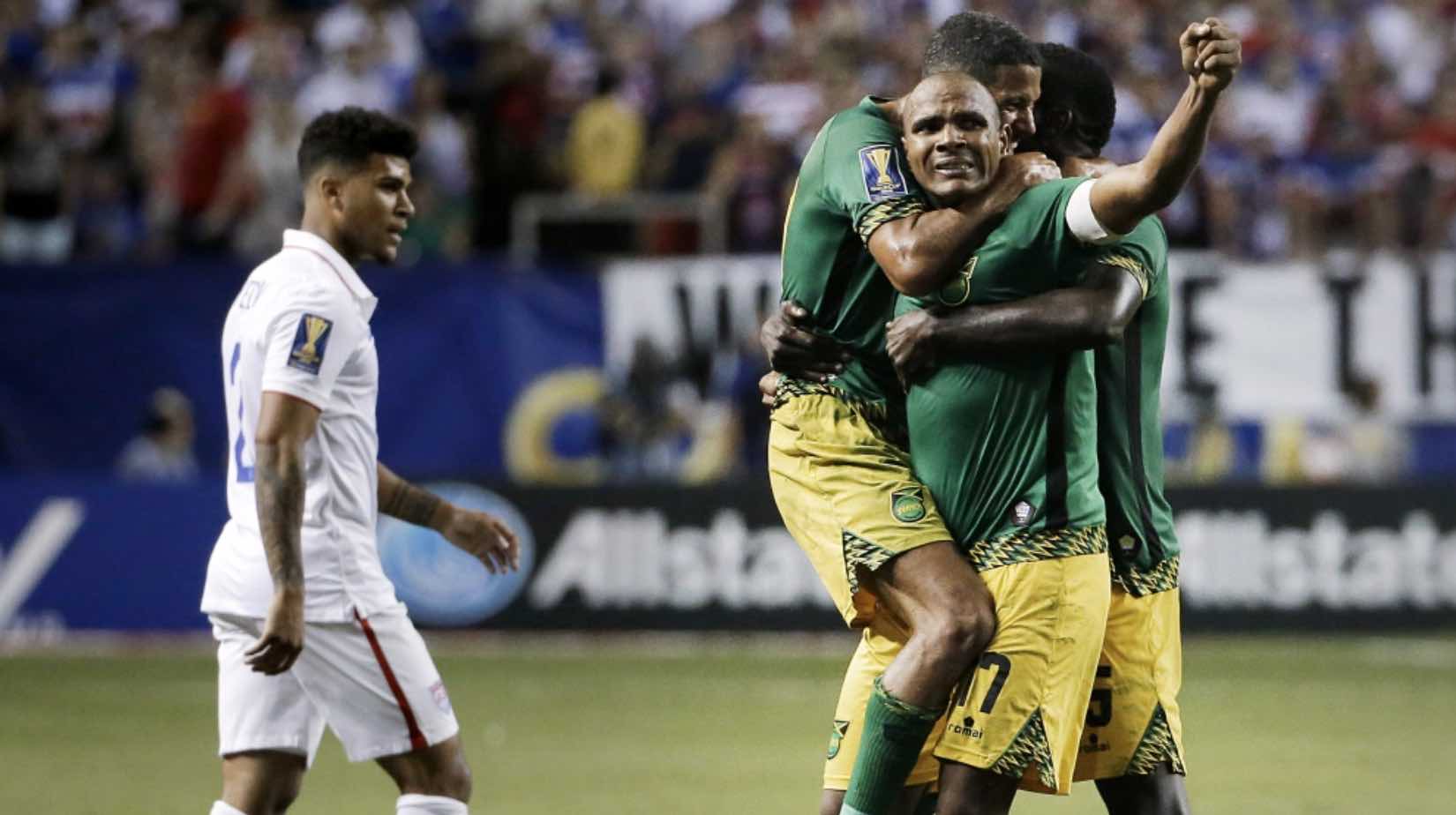 U.S. out of the Gold Cup after upset by Jamaica in semifinal

ATLANTA – The USMNT had the highest expectations for this 2015 Gold Cup, coming in to this match against Jamaica as reigning champions and the favorites to win the tournament, but the shocking 2-1 loss to the Reggae Boyz in the semifinal was the biggest surprise of the tournament and most likely the darkest night in Jurgen Klinsmann’s 4 years as the U.S. coach. This is the first time in 12 years that the U.S. Men’s National Team does not make it to a Gold Cup final match. On the other hand, this is the first time Jamaica ever makes it to a Gold Cup final. After this loss, the USMNT will have to go to playoffs in order to make it to the Confederations Cup.

[quote_box_center]”Obviously the team is disappointed. The fans are disappointed,” Klinsmann said after the loss. ”We wanted to play in the big final Sunday. We had enough chances to put three or four or five in there. We didn’t do it. That’s why we lost.”[/quote_box_center]

The game ended 2-1 to Jamaica and both goals were scored in the first half of the game. The U.S. actually started the game as the better team, however they were not able to capitalize on the opportunities they had earlier in the game.

When Jamaica had their chances, they were more clinical than the U.S. and did not miss their chances. When John Brooks failed to track the run of Darren Mattocks, the Jamaican was able to head the ball pass Brad Guzan’s arms.

Around 5 minutes after Jamaica’s first goal, Brad Guzan was caught throwing the ball outside the area and the referee called a handball just outside the box. Giles Barnes was the one who took the free kick and was able to place it perfectly and curve the ball into the goal leaving no chance for Guzan.

When the second half of the game started, it was clear that the U.S. had urgency to score goals. With 48 minutes on the clock, Aron Johannsson had a shot and both Clint Dempsey and Michael Bradley followed up, but Bradley was the one who sent the ball in to goal to score the U.S. first and only goal.

After the U.S.’s goal, Jamaica stepped up again and were able to hold on the score to their advantage until the end of the game. There was another really close shot by Bradley with 57 minutes, where the he shot the ball with effect and fooled Jamaica’s goalkeeper, Ryan Thompson, hitting his chest and then the post. One of the U.S. best chances was with California native Alan Gordon in the 78th minute, but the goalkeeper once again saved it.

Even though towards the end of the game the U.S. was sending everyone forward to try to score a goal, they just couldn’t do it. Even holding the most possession, having the most shots, and corners, the U.S. still came up short. Now, with this elimination from the Gold Cup they will have to play the winner of the tournament in October in order ti qualify for the Confederations Cup. On Saturday they will play for the third place against Panama.

Newer Post
DMCV at US Youth Soccer Nationals
Older Post
The Galaxy may have lost, but the fans won