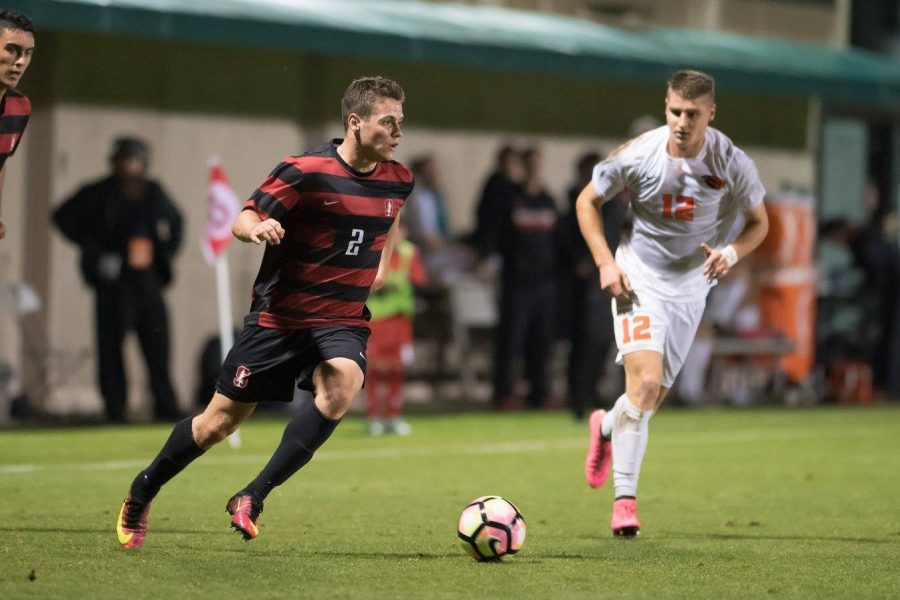 If last week was the top of the mountain, this week has to be the lowest valley for California college teams as everyone but the Stanford and USC women suffered a loss. San Diego State is the lone exception as they were idle this past week. Conference play for the majority of the teams in California ends this weekend.Below are recaps and updated rankings from the most recent NSCAA Coaches poll (November 1).

The Cardinal opened up the weekend with a 3-0 win over Oregon State before suffering a 1-0 overtime loss to #16 Washington on Sunday. Against Oregon State, a first half brace from Foster Langsdorf and a second half goal from Corey Baird were enough. Langsdorf now has 11 goals on the season. Against Washington, both sides had a flurry of shots throughout the match however no one could find the back of the net. That was until 80 seconds into overtime when Justin Schmidt scored the winning goal on a header. The loss ended Stanford’s eight match undefeated run. Up next for Stanford is the final Pac-12 match against California on Friday.

The Aztecs had no matches this past week. They have a busy week coming up with matches against Oregon State on Thursday and Washington on Sunday.

Stanford went to the Grand Canyon State and walked away with two more victories. The Cardinal defeated Arizona on Thursday 4-0 with a brace from Andi Sullivan. Goals were also scored by Michelle Xiao and Ry Walker-Hartshron. Sullivan added to her weekend tally with a second half brace against Arizona State in a 2-1 win. She now has 10 goals on the season. Up next for Stanford is the final Pac-12 match against California on Friday.

The Trojans enjoyed a productive weekend with a 1-1 draw against Utah on Thursday and a 3-0 victory over Colorado on Sunday. Against Utah, USC conceded the opening goal in the 72nd minute but bounced back with an equalizer from Taylor McMorrow just six minutes later. USC pounded the Utah goal in overtime but couldn’t find the back of the net. Against Colorado, Alex Anthony scored goals on either side of the half and Savannah Levin scored a first half goal. Up next for USC is UCLA on Friday.

A tough weekend for UCLA who suffered a 1-0 loss to Colorado on Thursday and a 2-0 loss to Utah on Sunday. UCLA will look to rebound against USC on Friday.

In Pepperdine’s lone match from the weekend they suffered a 1-0 loss to Loyola Marymount. Up next for Pepperdine is Pacific on Saturday.

Tough weekend for Cal, who opened it up with a 2-0 win over Arizona State before suffering a 2-1 overtime loss to Arizona on Sunday. Against ASU, Cal found the back of the net late with a 74th minute goal from Kelly Fitzgerald. Arielle Ship added another goal in the 83rd minute giving her nine on the season. Against Arizona, the Wildcats opened up the scoring under 60 seconds into the match. Cal answered back in the 29th minute with a goal from Kelly Fitzgerald. Both sides traded shots and it wasn’t until overtime when Arizona scored the game winning goal in the 108th minute. Up next for Cal in Stanford on Friday.