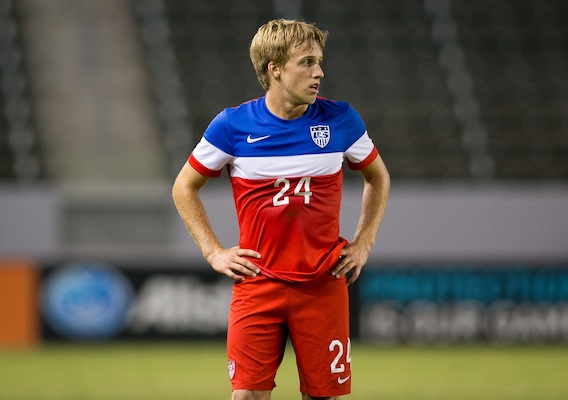 Carson, California - One year ago, Tommy Thompson was pretty far removed for the U.S. youth national team program. He had not been to a camp since one

Carson, California – One year ago, Tommy Thompson was pretty far removed for the U.S. youth national team program. He had not been to a camp since one of the earliest call-ins at the U14 age group and his path to a future call-up did not seem entirely clear.

In the midst of a challenging rookie season with the San Jose Earthquakes, Thompson was dealing with the difficulty of making an impact with his new team. In order to find minutes for the youngster, the Earthquakes sent him on loan to Sacramento Republic, a newly formed USL team. He started playing there and showing the special talents that made him into one of the most promising prospects to come out of Northern California in a long time.

Bouncing between Republic and Earthquakes, the door cracked open for Thompson. He received word he was a late addition to the U.S. U20 Men’s National Team for an international tournament in July at the National Training Center.

Ten months later, Thompson was again at the National Training Center, but this time he isn’t an afterthought or a late inclusion. Thompson is one of the cornerstones of this U.S. U20 Men’s National Team World Cup roster, and he’s over the moon to finally have his time to shine with the national team.

“Ecstasy,” Thompson told TopDrawerSoccer on Thursday about his reaction when he found out he was on the World Cup roster. “I knew it was going to be an extremely competitive group. Some great players unfortunately weren’t included. I’m sure they’ll help us down the road. I was happy to be on it and I’m excited about this opportunity.”

Thompson’s relationship with head coach Tab Ramos certainly helped pave the way for the 19-year-old to flourish while playing for the national team.

“Tab often gives me a free role whether it is in the midfield or up top with that comes a lot of freedom for me and I’m able to showcase my talents by doing whatever I want on the field,” Thompson said. “I find space and I don’t like to be confined to one area or one side. I like to make runs across the field. Tab gives me the opportunity to do just that and exploit the defenses.”

Earning the trust of the coach and gaining the role on the team has not come as easily with his professional team through his second season with the Quakes.

“Adapting to the physicality was a hurdle,” Thompson said about the most difficult part of joining the Earthquakes. “I’d say that I’m acclimated now. I think there’s been a little bit of a shift in the style of play in San Jose with the likes of Matias Perez Garcia signing and Innocent Emeghara. I love playing with guys like that. I try to be a sponge in training whether it’s Wondo’s finishing or Matias’ movement on or off the ball. I want to learn as much as I can.”

Over the past two years, Thompson has barely had time to breathe with brief stints at a few locations along the way.

“It’s not been easy going to three or four different teams in the past year and a half,” Thompson said. “I’m grateful for it. Each team gives me new opportunities to learn from different players and different coaches. My time at Indiana prepared me for the physicality that the MLS was going to bring – I wouldn’t say it’s as physical as the MLS, but it’s definitely a step up from what I was playing in high school. Going to Sacramento Republic for a month or so helped me as well. That prepared me by giving me professional minutes. That ultimately prepared me for San Jose.

“San Jose is the best preparation for the national team,” Thompson continued. “It’s an extremely high level to play in the MLS and when you’re involved in league games, it’s difficult. Getting the opportunity to get the professional experience at the highest level of American soccer couldn’t have made me more prepared to make an impact with this team.”

His growth on the field has only been part of the puzzle. Off the field, he’s also had to mature outside of his comfort zone.

“Off the field, it was a little bit of an adjustment as well as on the field,” Thompson said. “I was around all guys my age in college and I was with my brother [Tanner] so I felt right at home at Indiana right away. But coming to San Jose, it’s somewhat close to home, but two and a half hours is still a trip. It’s a little bit of an adjustment, but now that we have another draft class of players into the team there’s a lot more younger faces on the team that I can hang out with rather than just being the 18-year-old where the next youngest guy is still 22 or 23. It takes a little bit to get used to.”

Carrying over this knowledge and experience, Thompson heads to New Zealand with a new perspective and a new status within the national team.

“There’s a lot of talent on this squad,” Thompson said. “Everyone around here can’t wait to get to New Zealand. Qualifying was difficult, as it’s always going to be in CONCACAF. We’re ready for what is to come and we’re ready to make a splash.”