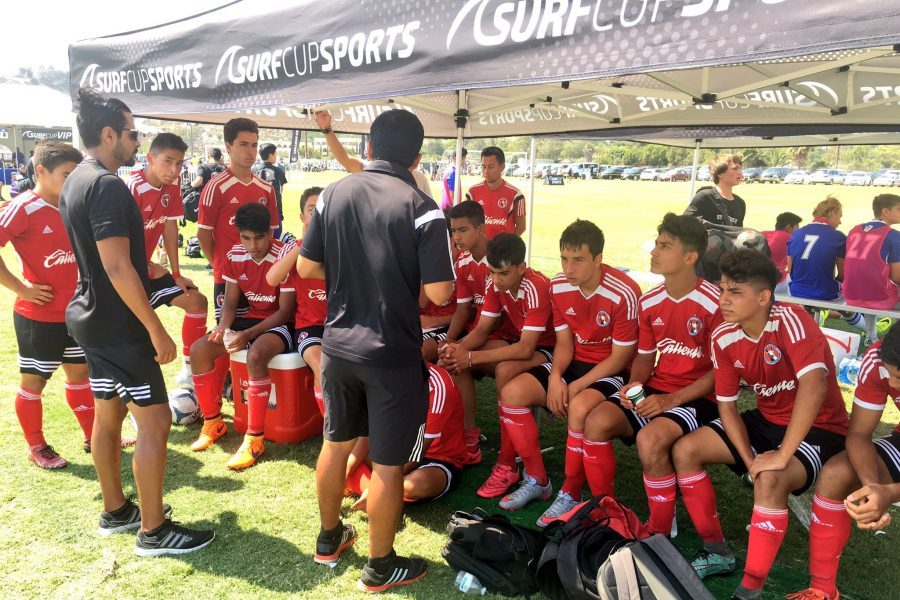 We were planted beside Field 14 at the Del Mar Polo Grounds this weekend, broadcasting six matches at the 2016 soccerloco Surf Cup in sunny San Diego. It’s been an interesting time these last two days, with a variety of age and skill levels on display.

The first match was a nasty 1-1 draw between the Parsippany Crew of Northern New Jersey and Sacramento United, a game that saw six cards issued to the team from the California state capital, including one red. The star of the game was Jalen Anderson, the tall number 23 who scored a fantastic opener for the red clad Crew.

Next up on Saturday was my first time getting to see the new look LA Galaxy San Diego (formerly Carlsbad Elite) as they took on Cordicca of Guadalajara in a U-16 contest. The Jalisco based side jumped out to an early 1-0 lead, before Titus Washington stole the show for the Galaxy, netting a brace en route to a 3-1 victory for his team. Cordicca were a solid bunch, and definitely have some players with some real potential.

The last match of the day saw another local U-16 side take to the pitch, the San Diego Surf taking on the San Jose Earthquakes U-16 group. There wasn’t a whole lot in this one, apart from a few moments of quality goalkeeping. It ended in a 0-0 stalemate.

Sunday saw lots of good action on Field 14, and the noon time opener had five goals. Unfortunately for the Global Premier Soccer Club of Massachusetts, only one belonged to them. Pacific Northwest of Seattle slammed home four, beating GPS 4-1 in convincing fashion. The U-16 group was one of the most fundamentally sound teams that we saw in the spotlight matches.

Next up was a battle of two teams from two fantastic American cities. It was Portland FC and the Honolulu Bulls in a U-18 match-up. The game was a fun one, entertaining from start to finish, with the second half consisting of all kinds of end to end play. Amazingly, there were no goals scored, and the game ended 0-0. The Hawaiian Bulls were the superior side for much of the game, but both teams hit the post in the dying minutes, with Portland doing so in the most excruciating fashion, the ball hitting the inside of the far post before rolling all the way back across the goal line and almost making contact with the near post.

The last match of the Sunday slate was another intriguing one, with another Pacific Northwest side being placed on the marquee. The U-17 game pitted Seattle United against Xolos, one of the many teams in the Club Tijuana system. After the Xolos senior team banged in four goals at Estadio Caliente on Friday night against Chivas, these U-17 boys proceeded to do the same, beating Seattle United 4-1 with Saul Patron, Chris Torres, David Ramo, and Kiko Olvera getting on the scoresheet. The best goal of the game, funny enough, was scored by Seattle’s Oscar Harding, a blistering drive from the top of the eighteen that smashed into the top corner to make the score 4-1 late on. If you’re gonna score a consolation goal, you might as well make it a screamer.

It’s on to the last day of the Surf Cup, as we leave our post at Del Mar and head to Oceanside for the final rounds. Stay tuned to Soccer Nation for more recaps of the exciting action at this year’s event.

Hailing from Watsonville, California, Nate Abaurrea is a writer and broadcaster specializing in coverage of the beautiful game on both sides of the USA-Mexico border. In addition to the #SNPod, Abaurrea's voice can be heard calling Liga MX matches in English for Club Tijuana, USL-PDL action with So Cal Surf, and the MASL with the San Diego Sockers. He also loves wine. And tacos.
Newer Post
Xolos Make a Statement with Massive Victory Against Chivas
Older Post
Looking Back on July