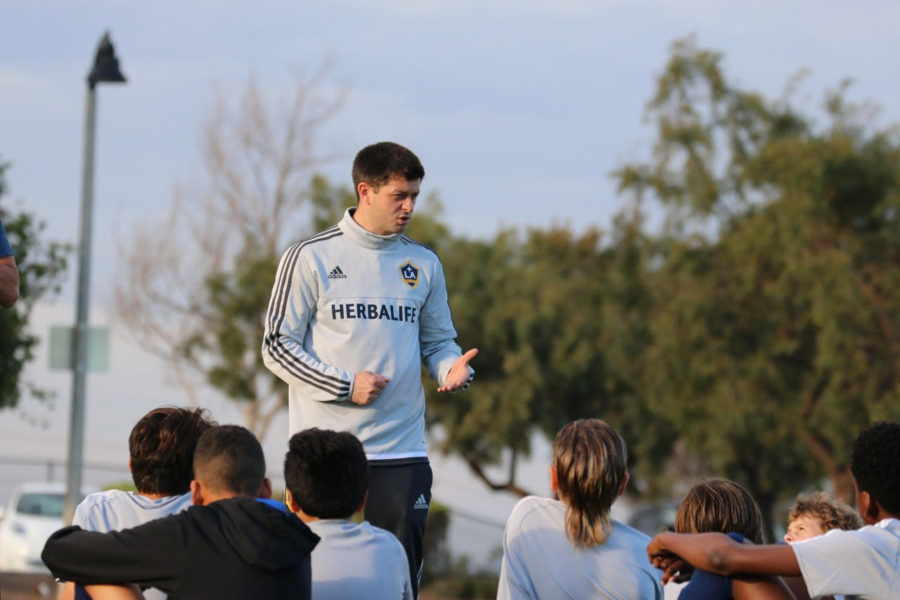 In this edition of the Soccer Nation Sitdown, our own Nate Abaurrea is joined by LA Galaxy SD Director of Coaching Steve Cowell. In Part 2 of the conversation, we learn about Steve’s background in the beautiful game, from his roots in the Northwest of England to his current life on the sunny shores of Southern California.

Nate Abaurrea: So Steve, tell us, how did you originally come to San Diego?

Steve Cowell: I first came to San Diego in 2002 as a summer camp coach for British Soccer Camps, and fell in love with the place right away. It was the first place I had ever visited in the U.S. and I couldn’t believe a place like this exists. I couldn’t get over Coronado Island, La Jolla, the beaches and the way of life, and I knew deep down one day this would be home.

After moving to the US full time in early 2004, I spent time as a coach and coach educator in the Midwest before moving to the East Coast, where I was fortunate enough to coach some fantastic teams in the Maryland / DC Area.

In 2009 I had an opportunity to move to Carlsbad, and couldn’t get here quick enough. I took over the Carlsbad Wave FC club with 9 teams, and built the club up into a well-respected program with 40 teams, before merging with the guys at Carlsbad Lightning to form Carlsbad United FC. Since then it’s been a whirlwind, but I just try to keep my feet on the ground and keep moving forward!

I am blessed to have my beautiful wife and our two sons and we don’t plan on moving anywhere else!

Nate Abaurrea: Steve, tell us a bit more about your own footballing background, and how you really developed as a footballing mind.

Steve Cowell: I was brought up in Warrington, just outside Manchester, England. There’s nothing too special about my playing background. I was a youth player just like the kids I coach today. I had some trials at Manchester City and one or two more clubs, but when I looked around at the players around me, I knew I was never destined to be a professional player. I was fortunate enough though to play for Leeds Metropolitan University. I scored a lot of goals there in three years and played with some fantastic players and great people.

Nate Abaurrea: Who do you look to for guidance as a coach? Do you have any coaching role models, or coaches you looked up to in the past?

Steve Cowell: I actually got into coaching at a really young age. My coach at Carmel College in England played for Manchester United and he got me into a sports coaching program for kids with special needs when I was 16. Seeing the impact you can have on young people inspired me to the career I have today. I’ve been coaching ever since.

I still look up to my Dad, and go to him for advice for all big decisions in soccer and in life. I think having people to look up to and the mentoring process is a really important part of being successful, and something that people don’t do enough. Listening to people who have more experience than you is vital, and being relatively young for my position, it’s something I have done and continue to do. In fact I probably wouldn’t be here if it wasn’t for one of my main mentors, Gwynn Williams, who steered me on the right path when I was about the throw in the towel.

I have three other Directors who I work side by side with at LAGSD, and on a day to day basis we are all mentors for each other. We have a unique working environment, and the support we have for each other is what drives this club. Glenn Malone, Michael Duggan and Carl Higham are great people and their experience and guidance is invaluable to soccer in Carlsbad. We also have a fantastic board at LAGSD including President Skye O’Grady who is a great mentor for us all and keeps our feet firmly on the ground.

If you ask any of my coaching staff, they will be the first ones to tell you that I am always telling them that I don’t know it all, not even close. I believe as soccer coaches we have a duty to keep on learning. I learn something every time I step onto one of our practice fields. I learn constantly from some of our younger 20 something coaches who are working with our beginner age-groups. As soccer coaches, we are all thieves! Everything we know is something we have seen done somewhere else at some point. We didn’t invent the game. It’s been around for a very long time.

Right now I am also working side by side with our Boys Academy Director Paul Ritchie who I believe is one of the top youth coaches in the US. I am constantly learning from him on the field, and picking his brains. Paul is a fantastic asset to our club and we are lucky to have him guiding our elite level players.

Nate Abaurrea: How do you feel about the current state of youth soccer in America?

Steve Cowell: I feel we are in a better position than we have ever been, but we are only just scratching the surface. First and foremost, whatever the level kids are playing at, it’s great to see millions of kids all over this country sharing in the World’s game.

At the Elite levels, it’s good to see US Soccer stepping in and taking a lead role in player development at the local and national levels. The small sided games initiative is something I have advocated for personally for a long time and is fantastic for the players.

We still have a long way to go in recruiting top athletes to soccer instead of other American sports, and we need to improve accessibility to high level coaching education for our grassroots coaches, along with accessibility to play the game to everyone, regardless of their financial standing.

LAGSD contributed around $200,000 in financial aid in 2016 to allow access to our program for all players, and it will take more efforts like this to improve access for all.

Nate Abaurrea: In your opinion, do you think there is a firm plan in place for where American club soccer is going in the next few years?

Steve Cowell: I think there is a clear pathway in place, but it has not yet been traveled, so it is difficult to know how successful we will be. If everyone’s number one priority is the kids, then the sky is the limit in this country.

Nate Abaurrea: Last question, Steve. What do you love most about the game of soccer?

Steve Cowell: For me, it’s a lifestyle. It’s a culture. It’s a sense of belonging. Working with people at all levels of the game, it’s a passion for the sport that ties us all together. I am forever thankful and blessed to do what I love the most in this part of the world, and I am excited to continue to make an impact on soccer in San Diego.