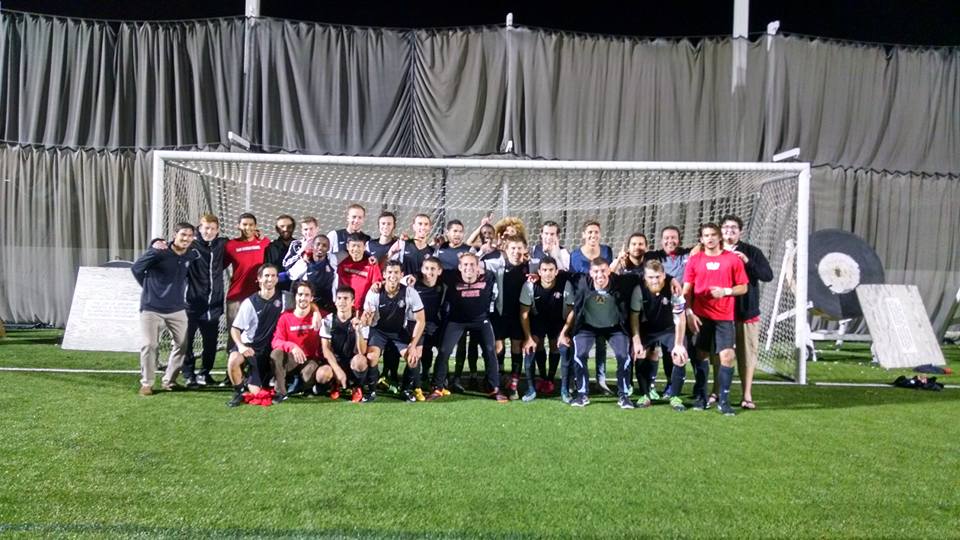 The San Diego State (SDSU) Aztecs Men’s Club Soccer team took on the University of California, San Diego Tritons (UCSD) in the SD College Cup final recently. The game was a rematch of the previous year, when UCSD narrowly prevailed to hoist the trophy. The Tritons were searching for a three-peat of winning the SD College Cup on home turf.

Unfortunately, the dream of three straight San Diego College Cup titles was denied by 8-time champions, SDSU. The Aztecs claimed the title in dramatic fashion, winning 5-4 on penalty kicks after a 1-1 tie in regulation. It was a supremely tense affair with over 400 fans screaming in attendance at the UCSD Sports Deck on a Saturday night.

In the first half SDSU admittedly bossed the game with several chances that missed just wide or skipped through the heart of the 18-yard box. UCSD trudged on, flying into challenges in the physical affair and soaking up the Aztecs pressure like a sponge.

Finally after 35 minutes, UCSD seized a small opening from the left hand side. The left-winger bolted through a small pocket of space, slalomed past three defenders, and calmly slotted the ball past the keeper into the net. The robust home crowd was ecstatic, almost mobbing the field. Minutes later a similar opening appeared to double the lead, but was saved by the outstretched keeper. That was how the half would finish.

After the break, SDSU settled their nerves and found their composure. They started to get into a rhythm and began creating chance after chance. Finally, an attempt found the back of the net in the 85th minute. The Aztec fans mobbed the field to cheer with the team and goalscorer. The referees were irate at the rambunctious fans for storming the field and added a couple minutes of stoppage time. Even after the 85th minute goal, SDSU pressed for the late game winner but had to finally settle for a 1-1 Draw at the end of regulation. Due to a shortage on time for stadium light usage, the game went straight to penalty kicks.

SDSU coach Eric Wohl said, “The PKs were an intense affair with Drew Tepping pulling off the save that ended up being the difference in SDSU taking back the San Diego Cup Club Championship. Overall it was a game to remember and we look forward to future battles with the UCSD club.” It was the slightest of margins that enabled SDSU to claim their 9th SD College Cup trophy.

[quote_box_center]”Hats off to UCSD for creating such an awesome atmosphere. As many could tell, this game was important for both teams and proved to be a highly competitive wild game. UCSD went up 1-0 in the first half off a brilliant individual effort. We had a majority of possession during the game but just couldn’t get the ball in the back of the net until we finally broke through in the 85th minute. We had a few more late chances but ended up in a 1-1 draw.” – Coach Eric Wohl[/quote_box_center]

Congratulations to SDSU! We look forward to seeing the growth of the rivalry in 2016. Can SDSU start a new streak of SD College Cup Championships or will UCSD come knock them off their perch next year?