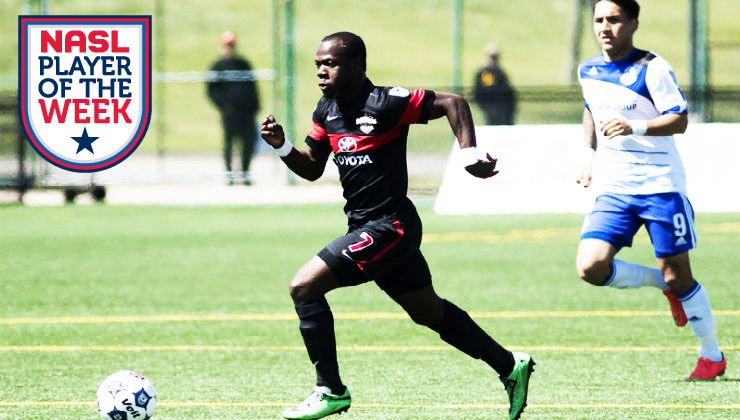 San Antonio Scorpions forward Billy Forbes has been named NASL Player of the Week after scoring a pair of second-half goals in his team’s 3-2 win over FC Edmonton at Clarke Field on Sunday.

“It was a really awesome feeling to have my first two-goal game of my career, but more importantly we finally got a win in Edmonton,” Forbes said. “I can’t take all the credit because I think the team played well, we continued to believe in each other, and we executed the game plan.”

The Scorpions’ victory came in a back-and-forth affair on Sunday afternoon. An early strike from San Antonio’s Omar Cummings was cancelled out by a goal from FC Edmonton’s Daryl Fordyce earlier in the second half. Shortly after the Eddies notched the equalizer, Forbes fired home his first of the match, slotting a shot past goalkeeper Matt VanOekel in the 62nd minute.

After Fordyce once again drew the match level, Forbes picked the pocket of Eddies defender Mallan Roberts and coolly deposited a shot into the back of the net for the eventual game-winning goal in the 82nd minute.

“We’re proud of Billy for fighting through some early season adversity to get back to the form that made him one of the most dangerous players in the league last year,” Scorpions President and General Manager Howard Cornfield said. “We all know how much potential he has and if he continues to work hard, the sky is the limit for him.”

With the 3-2 result, the Scorpions have now won two straight after a slow start to the NASL Spring Season. Sunday’s win was San Antonio’s first in Edmonton since joining the league in 2012, and it snapped the Eddies’ 11-game home unbeaten streak.

A native of Providenciales in the Turks and Caicos Islands, Forbes recently scored his first international goal for his home country, finding the net in a FIFA World Cup Qualifier against St. Kitts and Nevis.

Forbes and the Scorpions will continue their road trip this upcoming weekend when they visit the first-place New York Cosmos on Saturday. Kickoff is set for 7 p.m. ET at Shuart Stadium, and the match can be seen live on ONE World Sports (national) and KSAT 12.2 MeTV (San Antonio).