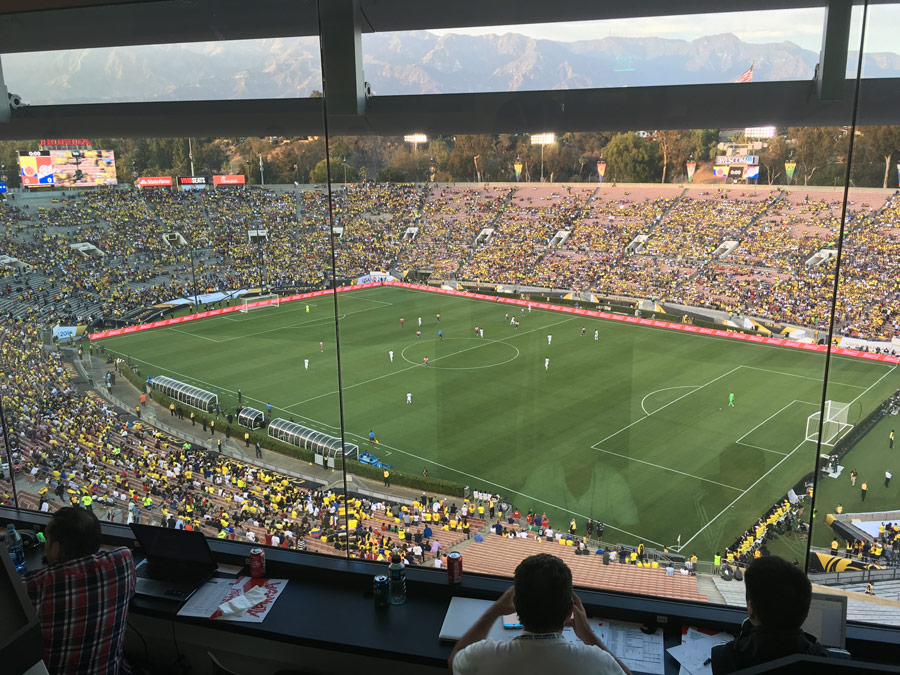 It looked like an evening of relative ease in Group A for the United States and Colombia on Tuesday. The U.S. waltzed over Costa Rica 4-0 at Soldier Field in Chicago, and Colombia took a 2-0 lead into the dressing room in the group nightcap against Paraguay at the Rose Bowl in Pasadena, only to see La Albirroja put up a grand fight in the second half, narrowly losing by a 2-1 scoreline.

After losing 2-0 to a superior Colombian side in the Copa America Centenario opener in Santa Clara on Friday, the exact same U.S. lineup took to the pitch in the Windy City and ran all over the Ticos. After an early miss from Costa Rica striker Joel Campbell, the Yanks took control. Clint Dempsey converted a penalty in the 9th minute after Bobby Wood was inexplicably shoved to the ground on a corner.

Jermaine Jones and Wood added to the American onslaught just before the break with perfectly placed shots to the lower corners of the goal, past hapless Costa Rican keeper Patrick Pemberton, the man filling in for injured Real Madrid star Keylor Navas. Graham Zusi came off the bench and scored the fourth in the 87th minute, pouring salt into a wide open wound.

The 4-0 result was a demonstration of American quality as much as it was a reflection of Costa Rican lethargy. It is almost mind-boggling, the fall from grace we’ve seen from the Ticos over the last two years, a team that was a penalty shootout against the Dutch away from the 2014 World Cup semi-finals.

Oscar Ramirez’s side have now gone two whole matches without scoring goal in this tournament, and their hopes of advancing to the knockout stage hang on the slimmest of slim chances. (A 5-0 win over Colombia combined with a 1-0 win for Paraguay over the U.S. would do the trick for the Ticos.)

There were plenty of critics after the opening match for the States, with a few players in particular looking less than effective against Colombia. Much of the criticism, as usual, was directed at Jurgen Klinsmann, with journalists and fans all over the country crying out for a change in on-field personnel.

Klinsmann responded with a pretty firm message. There was to be no change in the team-sheet whatsoever. The German gaffer stuck to his most stubborn of guns.

Say what you will about the poor performance from Costa Rica. You can only beat what’s in front of you, and it’s hard to argue about lineups after a 4-0 American victory.

The collective eyes of U.S. Soccer suddenly had a keen interest in the outcome of the Colombia – Paraguay showdown in Southern California, as Group A took on a whole new look.

It was an utterly dominant first half for Los Cafeteros, with captain and eventual “Budweiser Man of the Match” James Rodriguez involved in both goals, assisting Carlos Bacca on a corner for the opener in the 11th minute (the second time in their two matches that Colombia have scored the opening goal from a corner inside twelve minutes, both services off the left foot of Rodriguez), and doubling the Colombian advantage with a goal of his own in the 30th, a sweet, low driven finish to the far post with that famous left foot, past Paraguay goalkeeper and captain Justo Villar.

Paraguay went into the break knowing that (like Costa Rica) they had not scored a goal in the tournament. A crowd of 42,766 (at least 90% in support of Colombia) was in the midst of a dance party as the second half kicked off. Enjoying a picnic in Pasadena were the Colombian players, likely anticipating a cruise-control drive to the finish line.

Then came the Paraguay road spikes and a full blooded comeback attempt as nightfall hit the Rose Bowl. It was one hell of a second half, epitomizing entertainment to the neutral viewer. It felt like a true Copa America match between two South American sides who know one another all too well.

There was no quit from Paraguay. They simply out-hustled a technically superior team for much of the final 45 minutes, and exposed a number of weaknesses in the Colombian back line.

Arsenal and Colombia keeper David Ospina was in top form against the U.S., and continued to look like the best goalkeeper in the competition in this game, making a stunning save, fully stretched to his right to stop a looping header from Paulo Da Silva right around the halfway point of the second half. The tweets of praise from the Copa media were flying like Ospina himself, who had made a number of quality saves prior to the highlight reel block against Da Silva. He looked unbeatable, the Colombian Mister Fantastic between the posts, stretching with every muscle to keep Paraguay off the board.

It was going to take something special to beat Ospina on this night, and that’s just what the game gave us in the 71st minute. Victor Ayala (who entered as a substitute to start the second half) took a pass in the center of the park, followed by a couple of touches toward the right attacking side, before blasting a vicious, knuckling attempt up and over Ospina and into the top corner at the far post from about 25 yards, cutting the deficit in half, and providing an early nominee for goal of the tournament. Mister Fantastic watched in agony as it rippled the net.

No keeper or superhero was stopping that shot from Ayala, and the Paraguyan’s celebration (grabbing the ball, blowing a couple of antagonistic besos toward the Colombian fans behind the goal, and sprinting back to place the ball in the center circle) suggested that Los Cafeteros were in for a real squeaky bum time for the final twenty minutes.

Paraguay’s Oscar Romero was shown his marching orders in the 81st minute, picking up his second yellow in the span of just three minutes, which resulted in a wide open closing segment of the match. It was action packed, La Albirroja continuing to press almost everything forward, even with ten men, and forcing Ospina into more action. They were vulnerable to the Colombian counters, with one such odd-man rush ending with Rodriguez hitting the post.

When the final whistle blew from Brazilian referee Heber Lopes, the reactions from the Colombian players said it all, the substitutes bench invading the field at a full sprint to embrace their teammates, who almost all had expressions of relief on their faces. The agony was clear on the Paraguay side, with a couple players dropping to their backs, heads in hands beneath the Pasadena sky. It was a gritty affair filled with attacking football, and a total of 38 fouls, 20 from Colombia and 18 from Paraguay.

The results leave Group A looking quite different than it did just hours prior. Colombia sits pretty at the top, three goals to the good with six points, the U.S. now in second with three points and a plus-two goal difference. Paraguay, after the loss and the previous draw against Costa Rica, are in third place with one point and a minus-one goal difference. The Ticos are all but eliminated, one point to their names, no goals scored, and four conceded.

The final day of matches in Group A is this coming Saturday, Colombia taking on Costa Rica in Houston following the U.S. showdown with Paraguay. Unlike most major tournaments, the final group fixtures will not be played simultaneously, meaning Jose Pekerman’s Colombian game plan could be altered slightly by the result of the U.S. – Paraguay clash. Anything but a U.S. win means that Colombia will have clinched the group before a ball is kicked in Houston, a mentally bruised Costa Rica waiting for them at NRG Stadium either way.

In his post-game press conference, Pekerman admitted that James Rodriguez is still suffering from the shoulder injury sustained against the U.S. in Santa Clara, and is one serious knock away from being out for the rest of the tournament, maybe even needing surgery. Rodriguez’s club, Real Madrid, have yet to make a statement regarding the situation, but the freshly crowned UEFA Champions League winners can’t be all too thrilled with what has been said by Pekerman, as well as Rodriguez himself, who pointed to his national pride as a main factor in playing through the injury. It’s certainly something to keep an eye on, with Colombian fans sure to be holding their breath anytime Rodriguez goes to ground.

After changing nothing from game one to game two, expect more of the same from Jurgen Klinsmann and the U.S., as a determined Paraguay side joins them in Philadelphia to close out the group stage. Paraguay could very well throw caution to the wind from the start. La Albirroja can only advance to the knockout stage with a win, while a draw would be enough to send the Americans through.

Saturday is all set to be a wild day in the Centenario, as the competition hits a critical juncture. It’s onto the quarter-finals for two countries. For two others, it will be the end of the Copa America road.