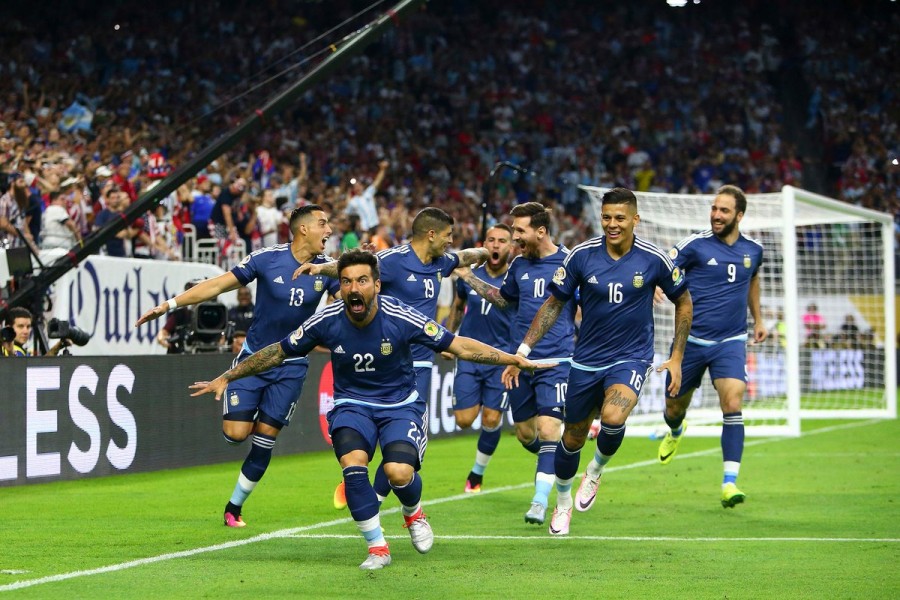 The United States were knocked out of the running for the Copa America title after a 4-0 semi-final dismantling in Houston at the hands of Argentina.

A crowd of over 70,000 at NRG Stadium was treated to a masterclass performance from Argentine captain and international soccer poster child Lionel Messi, who with the help of his supporting cast dominated the Americans in every facet of the game, Messi himself notching a historic goal and two assists.

The crowd in Texas, as well as millions watching around the world, barely had a chance to settle into the match, as Argentina opened the scoring in the third minute.

After playing a short corner and pulling the American backline away from goal, Argentina took advantage of American negligence. Kyle Beckerman (who was starting in place of the suspended Jermaine Jones) was caught ball watching as Messi sent a high, lofted ball through to a troublesome area, right between Beckerman and U.S. goalkeeper Brad Guzan, and right into the streaking path of his partner in lethal strikeforce crime, Ezequiel Lavezzi.

While Beckerman’s eyes zoomed with a worrisome focus on the Nike match-ball floating past, Guzan seemed to have a spastic reaction when faced with the decision of coming out to either catch or punch, or staying put on his goal line. A handful of rapid fire fidgets and half steps later, and Lavezzi had looped a headed finish up and over Guzan and into the back of the net.

Despite the early setback, and the struggle to touch the ball (let alone the inability to truly possess), the Americans put forth a gritty effort early against a vastly superior side, most notably defender John Brooks, whose last-ditch sliding challenge prevented Gonzalo Higuain from doubling Argentina’s lead before the half hour mark.

Clint Dempsey’s lone contribution to the match was his 28th minute swinging forearm that made direct contact with the Adam’s apple of Argentina’s Javier Mascherano. The ever tenacious Mascherano struggled to breathe for a few seconds, before getting up moments later and giving Dempsey the kind of look that says, “that was dirty, but I’ve done way worse, so let’s move on with life”.

The score, remarkably, was still 1-0.

Sadly for the Yanks, that double up card was about to be turned, and it was to be quite the spectacle.

After losing the ball in his own half and looking slightly overwhelmed in the process, forward Chris Wondolowski (filling in for the suspended Bobby Wood, whose yellow card against Paraguay in the quarter-finals meant he, along with starting midfielder Alejandro Bedoya, would not be eligible for the semis) made a furious effort to get back and contribute defensively. With Messi on the dribble about thirty yards from goal, dicing through the U.S. defense like the ball was glued to his feet, Wondolowski came charging in from behind, and swiped at Messi’s midsection with his left arm, pulling him to the ground and drawing a yellow card.

After taking his sweet time setting up the ball and re-tying his right shoe, Messi proceeded to call on his legendary left foot to sharply bend one of the finest free-kicks that you will ever see hit on American soil. It was absolutely inch-perfect, into the upper corner, to the left of a helpless Guzan at full stretch, off the underside of the bar and into the side netting. The score was 2-0, and the goal was Lionel Messi’s 55th in an Argentina shirt, putting him ahead of the great Gabriel Batistuta for the all-time national team lead. What a way to break the record.

Even at 2-0 against an in-form Argentina side playing supreme soccer, the U.S. still had the tiniest glimmer of hope coming out of the dressing rooms for the second half. That glimmer was crushed almost instantly, as a defensive breakdown less than five minutes after the restart saw Higuain clean through on Guzan. After making an exceptional save to stop Higuain’s initial effort, Guzan could do nothing as the Argentine striker latched on to his own rebound and put it in for 3-0. The American defense was nowhere to be found.

Though their keeper Sergio Romero was not once challenged, Argentina did have quite the scary moment in the 63rd minute, when Lavezzi sent himself flying over the advertising hoardings. Paramedics were immediately called upon, as it was initially feared that Lavezzi had injured his neck. Backing up rapidly in an attempt to keep a long aerial pass in play, Lavezzi drifted far beyond the touchline and slammed his lower back into the boards and flipped backwards, disappearing from the lenses of television cameras as spectators nearby jumped up in horror. The man who opened the scoring on the night got up under his own power, but looked to have suffered a serious arm injury that will surely keep him out of the running for a spot in the final.

DeAndre Yedlin and Gyasi Zardes were two bright spots for the U.S., each player’s speed and quality touch leading to one of the team’s only scoring chances, which came late in the second half. It has been a rocky ride for both Yedlin and Zardes in this tournament. Yedlin was placed straight back into the starting lineup at right-back after missing the quarter-final win over Ecuador due to suspension, his two yellow cards and subsequent red in the opening two minutes of the second half in the final group stage match against Paraguay going down as one of the more cringe-worthy occurrences in the last few American games.

Zardes, who has been widely criticized and oft mocked throughout the tournament, had a handful of quality moments with the ball at his feet against Argentina. There just never seemed to be anyone along for the ride, apart from an overlapping Yedlin in that one instance.

Argentina’s fourth goal came in the 86th minute, Higuain doubling his tally with a first-time finish off a clean pass across the face of goal from Messi. The five-time Ballon d’Or winner was again flying at the American defense, thanks to a shocking giveaway at the back from Steve Birnbaum, who had entered the match as a substitute late on, U.S. Manager Jurgen Klinsmann clearly anxious to give the DC United center-back a few minutes on the pitch.

U.S. captain Michael Bradley, who had a porous performance, looking particularly off in regards to distribution, played a simple ball to the feet of Birnbaum, who turned with the rolling pass back toward the center of the park, perhaps forgetting that the game was being played, by his opposition at least, at a world-class pace. Messi was waiting and stole the ball like it was a kindergartener’s lollipop before teeing up Higuain for the icing on the semi-final cake.

The 4-0 result means a few different things. First, it means that Argentina are into a Copa America Final for the second straight summer, and have arguably their best chance to rid themselves of a 23 year-old monkey that has been clinging to their collective back since 1993. That edition of Copa America, held in Ecuador, was the last time Argentina won a trophy at the full senior level.

Manager Gerardo Martino is fully aware of this, as is Messi, and the entire nation for that matter. There were doubts as to how seriously Argentina and a handful of other South American countries would take this economically engineered, “special anniversary edition” of the prestigious tournament, held for the first time outside of the traditional continent.

There is no more doubting the desire of Argentina, who happened to be missing two of the best players in the world on Tuesday night in Houston, creative and distributive dynamo Angel Di Maria and goal scorer extraordinaire Sergio Aguero. Whether it’s Colombia waiting for them in New Jersey, or a Copa America Final rematch one year on with Chile, Argentina will be the odds on favorite to lift the trophy.

The 4-0 result means the United States, for the second consecutive summer, will play in a tournament’s third-place match. Last year, it was in the Gold Cup, against Panama in Philadelphia, a contest the U.S. lost on penalties. This year in Copa America, it will be it will be against the loser of Wednesday’s Colombia vs. Chile semi-final, the consolation game taking place Saturday night in Glendale, Arizona.

Lastly, the 4-0 result, when combined with the 7-0 drubbing put on U.S. arch-rival Mexico by reigning Copa America champions Chile in the quarter-finals, sees the status of CONCACAF put into a more proper perspective. The two giants of the region, placed in knockout contests against two of the world’s elite sides in the span of four days (albeit in different rounds) were defeated 11-0.

Many in the Mexican media in the wake of the Chile result pointed to a false perception of reality, perpetuated by a number of things, from the federation fanning the flames of their own fire, to the blinded enthusiasm of the media itself. There seemed to be to be a glaringly similar delusion among a large faction of the American soccer landscape going into the semi-final against the Argentines. Perhaps, just as in Mexico’s case, a reality check was needed. While the semi-final was more of a statement of the skill of Argentina as opposed to the weakness of the U.S., it still exhibited the disparity, the massive gap in quality between North and South America.

There were three stats that stood out from Argentina’s 4-0 win over the U.S., numbers that hardly do justice in illustrating just how superb the team in dark blue was, and the inferiority on the night of the white-clad “home team”. However, they still get the point across rather clearly.

Not Jones, nor Bedoya, nor Wood could have turned those tides. The 4-0 win was a display of greatness from one of the best assembled teams in international soccer, a team that is clicking on all cylinders at the perfect time.

Onto the final for the blazing hot Argentines. Onto Arizona and a fighter’s chance at third place for the Yanks.

Though it’s being held on North American ground, it has always been “their tournament”, and here in 2016, whether it’s Argentina, Chile, or Colombia, the Copa America trophy will again, fittingly, be lifted by a South American side. If it is Argentina, it will launch the grandest of parties, as they will end the silverware drought that has haunted them to their national core for 23 years.