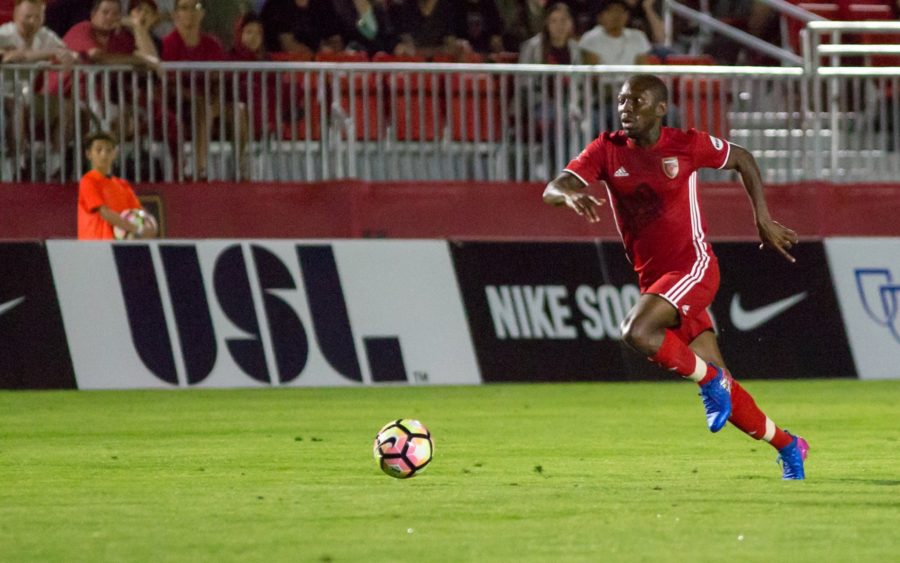 Hoping to rebound from a season-opening loss to Toronto FC II, Phoenix Rising FC travels to the Salt Lake City area this weekend to face retooled Real Monarchs SLC. Phoenix leads the all-time series between these two teams, four wins to three, but this isn’t your big brother’s Monarchs.

Hired just this past December to lead Utah’s USL side in 2017, former New York Red Bulls manager Mike Petke was elevated on Wednesday to head coach of the parent club, Real Salt Lake. This prevents what surely would have been one of the first USL matchups between head coaches who held the same job in Major League Soccer, with Rising FC being led by two-time MLS Coach of the Year, Frank Yallop.

Monarchs assistant Mark Briggs was promoted to head coach on Wednesday. The 35-year-old former Wilmington Hammerheads midfielder said, “While the end goal is to develop MLS-caliber players, an important part of development is winning. Finding success on the field goes hand-in-hand with our philosophy of winning in the USL while simultaneously teaching young players how to become more-polished professionals.”

The emphasis on “winning” could not be more obvious. In its first two iterations, SLC leaned heavily on academy products such as Justen Glad and Ricardo Velazco – academy products who are now in MLS. This year’s Monarchs team is stacked with proven USL producers, like dynamic striker Chandler Hoffman, overlapping left back Max Lachowecki, and captain midfielder Nick Besler, who last week terrorized his former club Portland Timbers 2 with box-to-box intensity, and a game-winning goal at Providence Park.

Lachowecki was particularly dangerous in that match, bombing down the left flank, an area that Rising struggled mightily to defend last Saturday against Toronto FC II. Should J.J. Greer and Kody Wakasa get the start again, they will need to be particularly mindful of their assignments, and not get caught out as they did on Ryan Telfer’s 8th-minute goal in Scottsdale.

Rising can be glad that they allowed only two corner kicks against Toronto last week, and successfully defended both. The Monarchs scored both of their goals in Portland off of corners, and produced nine such opportunities in total.

Rookie left back Victor Vasquez impressed for Rising last Saturday, as did veteran midfielder Matt Watson, but Phoenix will need to get more out of its stars to compete with a squad both older and more cohesive than Toronto. Specifically, Omar Bravo will need to be put in a position to score without having to do it all himself.

On paper, Rising lined up in a 4-1-4-1 last weekend, with Bravo the lone striker – emphasis on the word “lone”. Often on an island between the center circle and Toronto’s box, Bravo was not receiving adequate service from playmaker Luke Rooney or anyone else, and found himself either chasing a long ball, or removed from the play entirely. That sort of approach will get swallowed whole by Besler and company.

Assuming he hasn’t already, Yallop will need to quickly define the role of Shaun Wright-Phillips, who was a star in England on the right wing, but was maddeningly intertwined with Rooney in the middle of the park in the season opener. If SWP can find his niche in the squad, it could pave the way to a more efficient attack, and a chance to break through in Sandy.

The match kicks off at 3:00pm PDT Saturday. It will be broadcast in the Phoenix area by YurView Arizona, and streamed for free at the Match Center on USLSoccer.com.