The buzz at Phoenix Rising Soccer Complex Sunday night revolved largely around the introduction of Didier Drogba to the local faithful, but the heroes of the evening were on the field, as Phoenix Rising FC recorded a 4-3 win over Swope Park Rangers. 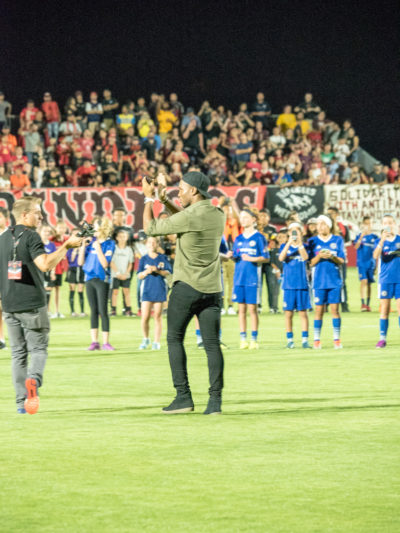 A third-straight sellout, the match attendance was announced as a new club record of 7,162. While “Drogbamania” was clearly a driver, fans on hand had reason for optimism after Rising’s strong performance against LA Galaxy II on April 8th.

The hosts controlled much of the tempo early on, as Chris Cortez and Omar Bravo kept goalkeeper David Greczek and company busy. Swope countered down their left side, where overlapping fullback Tyler Pasher put rookie Phoenix defender Kody Wakasa to the test.

In the 22nd, new Phoenix favorite Alessandro Riggi ripped a cracker from one corner of the box to the opposite upper 90, opening his Rising account and the scoring on the night.

Phoenix would double its lead swiftly thereafter, when Chris Cortez was tripped up at the corner of the box, and Luke Rooney slotted low to convert the penalty. Swope Park had a legitimate gripe with the call, as replays showed Greczek’s collision with Cortez to have taken place outside of the area.

Rooney said after the match, “Yeah I thought we started the game really, really well, probably exactly the same as against LA Galaxy II, maybe even better. Obviously much better by getting a goal, and I felt tonight we were rewarded and I thought it was a great performance in the first half.”

In the 27th, Cortez displayed remarkable individual skill with a nice dribble and low, curling shot through traffic, beating Greczek.

Swope Park attempted to inject some life by subbing in explosive striker Kharlton Belmar and midfielder Kevin Oliveira, making his return this year from a long-term injury. The two would indeed improve the Rangers’ pace, but the visitors would not get on the scoreboard before the break.

The excitement from halftime festivities to welcome Drogba was ramped up, incredibly, when two minutes into the second half, center back Peter Ramage put away a Rooney corner kick for an incredible 4-0 lead.

The blowout would not hold, however, and things got interesting.

With about 12 minutes to go, Oliveira converted a penalty after being tripped up on the edge of Josh Cohen’s penalty area. Rising’s Wakasa was issued a controversial red card on the play, where little, if any incidental contact coincided with Oliveira’s fall. This set up a comeback bid for the guests that kept the Phoenix fans on edge until the end.

Oliveira would add his second goal of the night in the 90th, threading a laser strike past Phoenix defender Jordan Stewart, and earning a USL Goal of the Week nomination in the process. Swope Park’s Christian Duke increased the home side’s anxiety three minutes into stoppage time, when he buried a 20-yard drive off the bounce, but it was too little, too late, and Phoenix took all three points.

“I thought we were outstanding in most parts of the game,” said Phoenix head coach Frank Yallop afterward, noting also that the team was not accustomed to defending a large lead. “Doesn’t matter how you win it, we got three points tonight, and that’s the most important thing.”

For his part, blockbuster signing Drogba was pleased with the warm welcome he received, as well as the team’s performance, saying, “Amazing. Great feeling to be here with the team and, especially to crown out the night with a win, I think it’s a good day.”

He went on to praise his new opportunity, further sowing optimism about the chances of Phoenix joining Major League Soccer.

“You know I could have gone back to Chelsea and work at the club,” he said. “I could have also joined some teams in the Premier League, and also in China, and even in the MLS, but I believed in this project. Phoenix had the potential to become one of the MLS teams within the next three to four years, and when you see what I saw today the game we played and the crowd, I think we are going to have to increase the capacity of the stadium because people are really, you can hear them. It’s amazing.”

Phoenix has a bye next week in USL play, but will travel to Tucson, Ariz., to take on FC Tucson in a friendly. They return to league action on May 6th when they host Reno 1868 FC at home. Swope Park will face Real Monarchs SLC in Sandy, Utah on April 29.