One on One with Christen Press

Hydrive Energy Water, a refreshing, zero-calorie energy water, recently announced a contest that invites fans to enter to win a soccer clinic with Christen Press, a forward for the U.S. Women’s National Team and FIFA Women’s World Cup Champion.  The soccer clinic will give the winner and their friends a chance to run drills, practice and train with Press in their hometown.

Fans can enter by sharing a photo or video on Instagram, Facebook and/or Twitter using the hashtag #PlayWithPress or at hydriveenergy.com/soccer. Entrants are encouraged to creatively showcase their passion for soccer and excitement to meet Christen.  The contest began on February 1st and runs through April 30th, and the winner will be chosen by May 10, 2018.

“A hometown clinic with Christen allows Hydrive fans to experience firsthand the energy and excitement that Christen brings to soccer. As brand partners, we are thrilled to be able to work with Christen and our fans for this unique experience,”  said Thomas Oh, Senior Vice President of Marketing for Big Red, owner of Hydrive Energy Water. 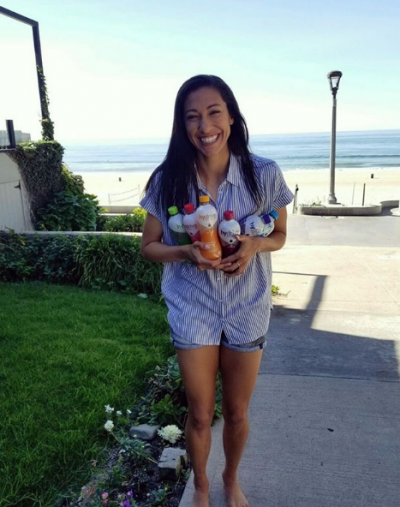 Press spoke to SoccerNation in a phone interview to get a better sense for what prompted this partnership and why Hydrive is a good fit for her.

Dike Anyiwo: Tell me about Hydrive. What about this product resonates with you?

Christen Press: When I tried it I was very pleasantly surprised. As athletes we get a lot of products put in front of us and I personally don’t have a strong taste for energy drinks but this is very drinkable, it has really great flavor and it is something I can easily use during my workouts. Before and after as well. It gives me what I need for training and recovery.

I prefer drinking Hydrive right before or during training especially since that’s when it’s important to refuel and stay hydrated.

Dike Anyiwo: What prompted you to launch the #PlayWithPress campaign with Hydrive Energy Water?

Christen Press: I think it is important for us as players to connect with our community. It’s something that I personally enjoy about the sport, seeing girls who want to play for the national team or in the NWSL. I love to see that they are enthusiastic and passionate about football and I love that I get to share the passion and the training methods that I’ve learned over the years.

It’s really enjoyable for me to be able to share my love of the game with young people, and to share our personal journeys with these players on their journeys. It’s a way to get out and reminisce on the good ol days I when I was in their shoes. I remember when I was a young player and looked up to the national team and I remember being a young kid training with Shannon Boxx. When she made the national team I followed her career and eventually played with her and it’s a cool story for me and to now be on the opposite end of it, it’s a big honor and its something I take seriously.

Dike Anyiwo: How important is it to you to engage with the next generation of players with clinics like this one? What can the winner of this contest expect to experience?

Christen Press: I like to interact with youth players as if they were on my team. I think it’s so important for us to pay attention to the next generation. We’re trying to push the game forward. We do that on the field with our play, but that ends eventually for everyone, it very finite, and what we can do to continue to push the game forward is invest in that next generation.

I prefer to just go out and have a training session alongside them and run the drills as if they were my equals because that’s just how I train. I’ve been doing it for seven seasons now.

Dike Anyiwo: In light of where we are today as a soccer nation, where do you think the women’s game is going in the next few years?

Christen Press: I think there are kind of two distinct parts to that. One is on the field play. The international game is just rapidly advancing and so that makes our job as American women’s players much more difficult.

In the past we were so far ahead of other countries just in terms of resources and opportunities to play but nowadays many of the most competitive countries have the same level of resources or close to the same so it means that the next World Cup will be even more difficult but as hard as that is going to be, it just means that the next one is definitely going to be much harder.

It’s a beautiful thing its great for the game, it’s going to make the game more exciting to watch for fans, but for us it means we have to be constantly pushing the limits and evolving in sophistication in how we play.

The other side is the work for those resources. Making sure the way we are off the field sets us up for success on the field. They are intricately tied. The union work. How we define professionalism. It’s working to advance our league to make it more fair for all the players. I think that’s actually a harder battle because we got into the game because we love to play. that’s always going to be our focus and we can’t let the behind

The other side is behind the scenes, it’s always going to be secondary to performance but the NWSL is in the process of unionizing. We really are trying to push the limits. I didn’t even know we had a union when I joined the national team. We’ve come along way in just the last 3 years, with hiring an executive director, legal representation, making sure the players are informed with respect to the projects we’re developing in terms of our marketing our community outreach, internal communications, preparing for the CBA negotiations. all these things are going on in the background and its the players’ responsibility to do a little bit of double duty.

It’s optional, but it is for players who are more interested in the state of women’s soccer and how we can make it better for the future.

Dike Anyiwo: You mentioned a love of the game and ultimately what started you down this path in the first place. To wrap up, can you recount maybe your favorite moment as a player, whether its goals scored or travelling with your teammates or whatever:

Christen Press: For anyone who has been playing this long, my relationship with football is very complex. There have been many different seasons and stages I’ve had with the game. at first it was pretty stressful in college and as an early pro because I was so result-oriented. and I’ve come through a long funneling process where I’ve re-found my joy in training and my joy in playing my joy in being on a team and I think right now I’m in a place where I’ so excited for my future because I really feel connected to my sport and connected to the people I play with. That’s a really cool thing for me.

In terms of best experience, some of the people you meet along the way are so amazing. Playing for the national team has been a wonderful experience as well. On the field I think what’s meant the most to me is when someone else on the field has trusted me. It could be a small thing like a pass or a look or a feeling that I have, but I think what I most enjoy is when you work really hard to foster trust with your teammates and that’s something that when it does happen means so much to me.