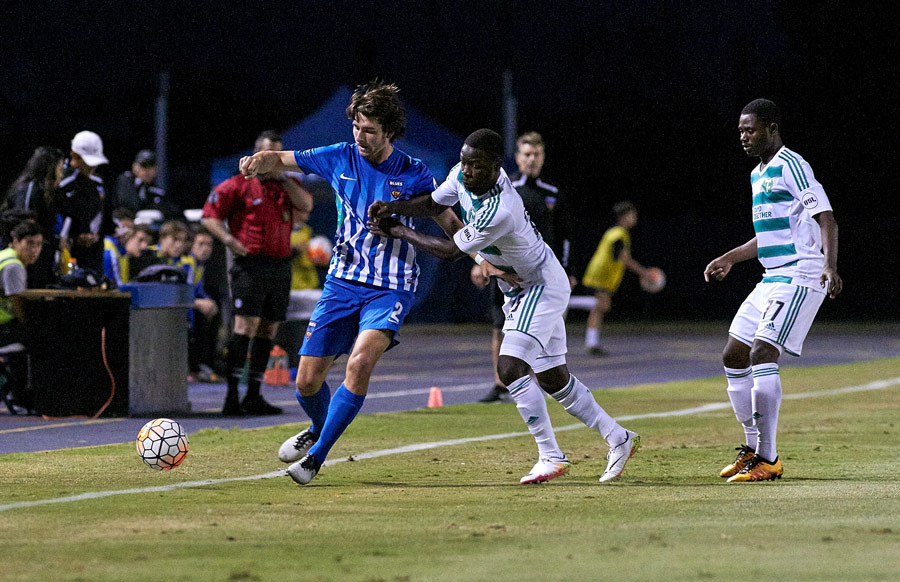 The Orange County Blues faced their first shortened week of the 2016 USL season, and came out of it successfully, winning both at the weekend — a 1-0 win over San Antonio FC — and on Wednesday — another 1-0 win, this one over Portland Timbers 2.

They followed that up with Wednesday’s win over T2, starting their first winning streak of the season and continuing their perfect record all-time against Timbers 2. Trinidad & Tobago international Trevin Caesar, the Blues’ high-profile offensive addition in the offseason, got off the mark with the winning goal near the end of the first half. And while the Blues have so far notched narrow wins, they’re starting to get the job done nonetheless and have moved way up in the Western Conference standings to 6th place ahead of this weekend’s action. They’re off this weekend before playing Sacramento Republic in NorCal on April 30.

Meanwhile, the other local USL side, LA Galaxy II, had last weekend off after a rather-furious start to the season and are back in action on Friday, hosting Vancouver Whitecaps FC 2. It’s not only a battle of two MLS2 sides, but also between two unbeaten teams and the top two in the Western Conference standings.

While many expected LA to be good this season, Vancouver’s strong start has surprised some around the league. Largely making over their roster in the offseason, they are playing strong soccer on both sides of the ball and will probably be a tough match-up for Galaxy II. Add to that LA’s run of three straight draws and some are wondering if they’re getting closer to dropping a game this year.

But both teams had last weekend off and should therefore be in roughly the same shape coming into the game. Kickoff is at 7:30 pm PT on Friday at StubHub Center. You can buy tickets on the Galaxy’s website or catch the stream on YouTube.

Alicia covers soccer in Los Angeles for SoccerNation.com. Her work is also featured on Angels on Parade and MLSsoccer.com. She lives in Southern California with her husband and daughter.
Newer Post
Interest in MLS Expansion to San Diego Hits the News Again
Older Post
PUMA Reveals Latest Edition Of Dual Colored Tricks Cleats