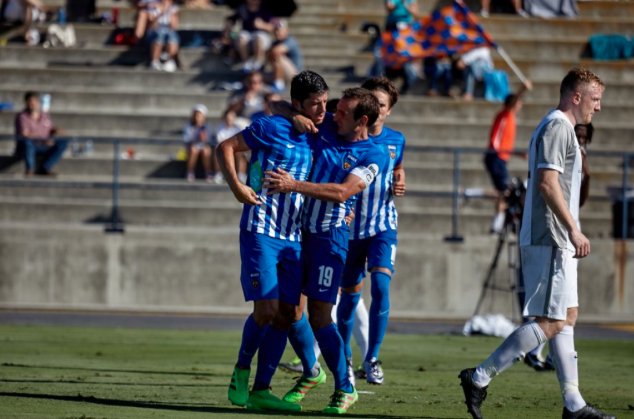 The Orange County Blues had the local USL spotlight on them this past weekend, with the LA Galaxy II on a bye. The Blues hosted Sacramento Republic FC on Sunday afternoon, and played to an entertaining 3-3 draw.

Sacramento drew first blood in the game, with Mike da Fonte scoring an audacious volley off a set piece that nestled inside the far post in the 21st minute. Sacramento went to the break with the lead, and it looked like OC’s streak of alternating losses with results might be broken.

But there was 45 minutes left to play, and the goals came in bunches in the second half. First, OC midfielder Didier Crettenand converted a penalty just after halftime to tie up the match.

Then the Blues grabbed a 2-1 lead in the 72nd minute, as strikers Akwafei Ajeakwa and Trevin Caesar connected for a goal, the former sending a floated cross to the backpost that the latter scored on. With the deficit overturned, it looked like the Blues would get a big three points in the game.

But Sacramento had the immediate answer, with Cameron Iwasa scoring a header off a free kick in the 79th minute to tie it at two goals apiece.

The next goal was the pick of the lot, as Crettenand scored his second of the game on a direct free kick a few minutes later, and with the game in its final minutes, it appeared OC might have really gotten the winner this time.

But Sacramento found another equalizer, with Mackenzie Pridham had the dagger with a nice finish off a cross to leave it at 3-3.

From a spectator’s perspective, the second half was terrific to watch, but dropping two second-half leads must be concerning for the Blues. Make no mistake, getting a point was useful, as it moved them back up to 7th place in the West, compared to the 10th place they were sitting in coming into the game. But two more points would have lifted them another place in the standings and padded their hopes of reaching the postseason. The Blues, who are consistently inconsistent at this point with their results, sit in midtable and will look to put together a successful run instead of the “one step forward, one back” pattern they’re currently in.

Their next test won’t be so easy, as they’ll face OKC Energy FC in Oklahoma on Saturday, the teams’ first meeting of 2016. Galaxy II, meanwhile, will get back in action on the road on Saturday as well, in their case heading up to Portland to take on fellow MLS2 side Portland Timbers II.