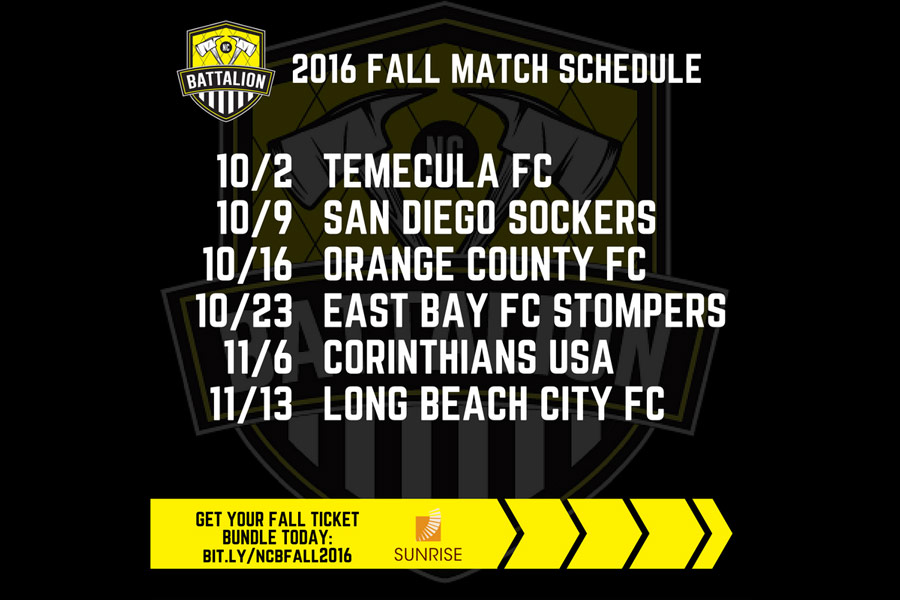 Since wrapping up their inaugural season competing in the National Premier Soccer League, San Diego’s North County Battalion soccer club have been active. It was hard for them not to remain in motion, riding the wave of momentum generated by their inaugural campaign in which they finished as top scorers and in second place overall in their conference, and reached the round of 16 in a run into the playoffs of a league that consists of over 80 clubs scattered across the nation.

The high octane style of soccer that the team played on the field was a reflection of the mentality of the ownership. Majority owner Jason Barbato recruited an attack minded coach in Ryan Guy who, along with the other members of the coaching staff, was able to harness the available talent in the region and bring his dreams to life.

A self-proclaimed Seattle Sounders supporter, Barbato yearned for a similar experience to what can be found in the Pacific Northwest in his own community and took it upon himself to create one in the absence of any other suitable outlet. The club was founded on the premise that the San Diego soccer community has talent, and that San Diego as a sporting landscape has lacked an outlet for that talent to grow into. By launching the Battalion, Barbato hoped to give the area’s youth a chance to compete at a higher level than what was available.

A firm believer in community, Barbato looked to forge a symbiotic relationship between the club and its membership, and has already connected with several youth soccer clubs across San Diego county, with an eye towards giving as many talented young players an opportunity to shine. The Battalion is growing as a club and has begun to take on an identity of its own. With nearly a year in the history books, there is a clear trend of aggressive ambition mixed with civic responsibility.

Although the NPSL does not resume competition until Spring of 2017, the Battalion has taken the initiative and spearheaded a movement to play a Fall Development Season. During the autumn months, the Battalion will be actively recruiting additional talent for their roster, as they strive to prepare for the next NPSL season.

The club has already held one tryout in late August and will be hosting another on Sunday, September 11th.

Additionally, the Battalion have announced an exhibition match between San Diego’s premier indoor soccer team who currently ply their trade in the Major Arena Soccer League. The match against the San Diego Sockers is the first of its kind, and a portion of the proceeds will be donated to charity.

The future is bright for the Battalion, and while there is still quite a long way to go, San Diego soccer fans can begin to look forward to having a team in town who wants to be here forever.