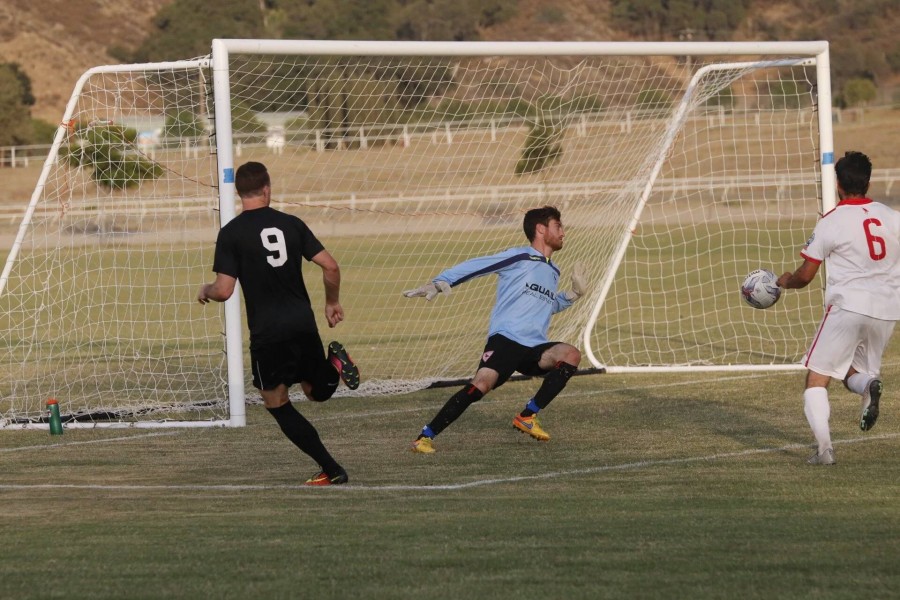 The Soccer Saturday of the Magnificent Seven

In 1960, American film director John Sturges created a masterpiece known as “The Magnificent Seven”. A western recreation of a famed Japanese from a half decade prior entitled “Seven Samurai”, Sturges’ movie starred Yul Brynner, Eli Wallach, Steve McQueen, Charles Bronson, and a host of other legendary actors. The film is being remade and released later in 2016, with Denzel Washington and Ethan Hawke taking center stage.

When Sturges completed his project in 1960, he couldn’t have possibly imagined the legacy it would have. It’s also likely that Sturges never foresaw the title of his film being used as one of the finest and most luxurious cliches in the world of soccer. On Saturday June 18th, we heard it used twice in the span of a couple of hours, first in the NPSL, followed by the Copa America.

There’s something satisfying about the number, on its own merits. Some say it’s lucky. Some just like the way it looks and sounds. It rhymes with heaven, and if you’ve ever purchased an ice cold 7-Up from a 7-11 on a hot summer day, that rhyme scheme takes on a whole new meaning. There are seven continents in the world, with seven seas surrounding them. On Saturday, (the seventh day of the week), the North County Battalion scored seven goals against Temecula FC, smacking a renewed statement of intent on the NPSL Southwest Conference.

It was a strange setting for a soccer match, the two teams playing on a grass pitch (the only one in the conference, unfortunately) nestled beneath dusty brown and rolling purple hills, the playing field situated smack dab in the middle of a horse racing track at Galway Downs in Temecula. It was a sultry day, 93 degrees with a strong element of inland humidity, with winds of over 20 MPH swirling dirt from the race track up into the air. It was gorgeous and slightly surreal, just like the match itself.

Blake Milton opened the scoring for the Battalion in the 15th minute, his angled blast from just inside the box caroming off the crossbar and the goal post, and just barely over the line, as Temecula keeper Salem Bortcosh attempted to grab the ball which had bounced back out of the goal. The assistant’s flag had been raised. It was 1-0 to the visitors. Ten minutes later, the new kid on the block, Asher Booth, thumped home the second in a 1v1 situation. 2-0 to the NCB at the half.

Temecula grabbed a goal just 90 seconds after the restart through substitute Joseph Orozco, but less than a minute later, the Battalion struck again, this time through Eric Lopez, who headed into an empty net from point blank range after Booth had his header saved off the bar by Bortcosh. Booth netted his second of the match in the 56th minute, an exquisite headed finish off a Michael Harrow corner kick. 4-1 Battalion.

In a match that was all about the total team effort, Eric Lopez proceeded to make it all about himself in all the best ways. After thumping in a low blast for team goal number five, Lopez scored two more, becoming the first player in North County Battalion history to score a hat-trick (and obviously the first to ever score four in a game as well). The seventh may have been the finest goal of all, Lopez deftly chipping one over a sliding Bortcosh from an acute angle after speeding past a defender at the left attacking corner of the eighteen.

Moments after that final Lopez goal, the lighting at Galway Downs changed drastically, the bright sun suddenly being completely covered by a high gray, casting a shadow over the field and the surrounding race track. Off in the distance, miles to the north, the sun continued to shine on those brown and purple hills, creating a mesmerizing visual that was made to be even more spectacular by a massive rainbow, all seven of its colors beaming down to the land below. 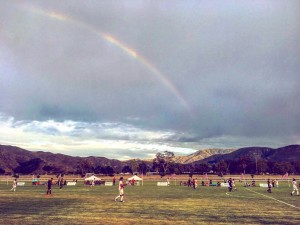 Temecula were given a late penalty, which was converted by Luis Reyes, a consolation of sorts. The final whistle blew, with a magnificent 7-2 scoreline for the Battalion. Many of the players and traveling San Diego supporters were anxious to get to a television screen, and catch the remainder of Mexico vs. Chile in the Copa America quarter-finals. A dust bowl ensued, as cars quickly departed the Downs, and made their ways to a Temecula pub.

Chile were already up 1-0 on El Tri at Levi’s Stadium in Santa Clara, the home of the NFL’s San Francisco 49ers, a place where seven is usually a product of a touchdown and an extra point.

Edson Puch had put La Roja in the lead in the 15th minute. Arsenal star Alexis Sanchez proceeded to put on a dribbling and distribution clinic just before half-time, setting up Eduardo Vargas for the second Chilean goal. Mexico looked shell shocked, but they had the interval to work with, manager Juan Carlos Osorio surely ready to have the most important conversation with his players in his short but successful tenure with the Mexican National Team. Apparently his counterpart, Juan Antonio Pizzi, had the better half-time speech. Or maybe speeches didn’t matter. Mexico looked weak. Chile were playing football out of this world.

What happened in the second half was one of the most dominant displays in modern international soccer history. Alexis nabbed a goal of his own less than four minutes after the restart. Vargas netted his brace in the 52nd, adding two more in the 57th and 74th minutes, before Puch knocked one home in the 87th. It was an Eric Lopez like performance for Vargas, his four goals taking him to the tournament lead with six in total.

There was to be no Temecula-like consolation for Mexico, and as projectiles rained down from the stands, the loyal Mexican patrons departed in mass unison, each and every individual forced to glance at the scoreboard one last time before they hit the exits. 7-0 Chile! It was the biggest ever defeat for Mexico in an official competition, El Tri knocked out of the Copa America with a performance that Osorio himself called “an absolute disgrace”.

There was nothing disgraceful about the Chilean performance. They were simply sublime, as were all seven of their goals. They’ll take on Colombia in the semi-finals on Wednesday night.

The Battalion play Corinthians USA in NPSL play on the same night, surely hoping that this kindred goal scoring relationship with La Roja can continue. It would most definitely be magnificent.